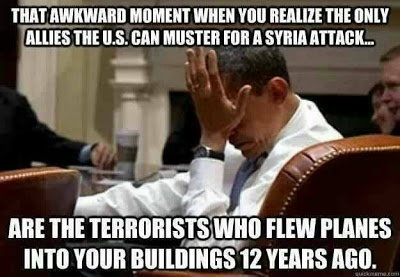 URGENT: Compelling proof that a Saudi black ops team was responsible for a chemical attack in Damascus the day UN inspectors arrive in Syria. According to a source: “Based on data from a number of sources a picture can be pieced together. The criminal provocation in Eastern Ghouta was done by a black op team that the Saudi’s sent through Jordan and which acted with support of the Liwa Al-Islam group.” Read moreIn this issue: Saudi black ops team responsible for chemical attack in Syria / Christians arrested for evangelism in Obama’s boyhood home / Muslim Brotherhood salute at Homeland Security / Senator McCain hires paid propagandist / Prayer Caucus Congressman gives back his pay during shutdown / Syria: More churches destroyed by rebels / Syria: Jihadists unite into one group / Nigeria: Death count rises in school attack / United Kingdom: Tax funded Sharia compliant schools / Qatar’s World Cup slaves

The Presidency
Christians arrested for evangelism in Obama’s boyhood home – Two Christians have been arrested and jailed for up to three years of “evangelism” in President Obama’s boyhood home of Indonesia. Obama repeatedly refers to Indonesia as a “tolerant” nation and as an example for religious freedom. Will Obama call for the release of the jailed Christians? Probably not. Read more Send a free fax to your congressman demanding a congressional resolution addressed to Obama on this issue!
Muslim Brotherhood salute at Homeland Security – Mohamed Elibiary is on Obama’s Department of Homeland Security Advisory Panel and he recently plastered a Muslim Brotherhood symbol on his public Twitter profile. The R4BIA symbol is used by those trying to return the tyranny of the Muslim Brotherhood back to Egypt. It is also popular with Islamists in Turkey who believe it supports Islamic Jihad, the unification of the Islamic world and the end of capitalism. Read more
Congress
Senator McCain hires paid propagandist – Somethings Senator John McCain does are beyond imagination. McCain has just hired Elizabeth O’Bagy as a legislative assistant. O’Bagy was recently fired from her job at the Institute for the Study of War after her employer found that she had lied to them on the status of her non-existent Ph.D. She was barred from Fox and other news outlets after it was discovered that she was paid propagandist for Syrian “rebels.” Read more
Prayer Caucus Congressman gives back his pay – Congressman Randy Forbes (R-VA), the chairman of the Congressional Prayer Caucus, has written to the Chief Administrator of the House of Representatives to ask that his salary be withheld during the government shutdown. Read more
Religion and Culture
Don Feder on godless government – “When Dostoyevsky said “If God does not exist, then everything is permitted,” he didn’t mean everything as in raindrops on roses and whiskers on kittens, but everything like mass murder and torture chambers.” Read more
Catholic business beats ObamaCare mandate – The 10th Circuit Court of Appeals has upheld a district court order vblocking enforcement of the Department of Health and Human Services abortion, contraception and sterilization mandate. The Hercules, Inc. is run by the Catholic Newland family, who object to being forced to provide these abortion services to their employees. Read more
International
Syria: More churches destroyed by rebels – Al-Qaida-linked Syrian rebels from the Islamic State of Iraq and the Levant sacked a Melkite Greek-Catholic Church in the Syrian town of al-Raqqa. Read more
Syria: Jihadists unite into one group – Forty-three different terrorist groups operating in Syria to overthrow President Bashar Assad have just joined an alliance known as the Army of Islam. The head of this 43 member terrorist group is Zahran Alloush, who commanded the Liwa al-Islam brigade. Not joining the group is the Free Syrian Army and the biggest terrorist group Al-Nusra. Read more
Nigeria: Death count rises in school attack – The Muslim group Boko Haram attacked the Yobe State College of Agriculture in Nigeria in the middle of the night killing 50 students in their sleep. Just recently another 15 bodies were discovered in the bushes near the college as terrified students fled for their lives. Read more
United Kingdom: Tax funded Sharia compliant schools – The Gatestone Institute reports that a British tax-payer funded school is operating according to Sharia law in Derby. Islamic fundamentalists are running the Al-Madinah School and have forced female teachers (including non-Muslims) to wear covers over their heads. Read more
Qatar: World Cup slaves – The Guardian newspaper revealed the horrid facts of the treatment of “quest workers” in Qatar, who are the equivalent of slaves, used to prepare for the prestigious World Cup. This is the same Qatar financing the “rebels” in Syria to bring “democracy.” Read more
More from the Religious Freedom Coalition
New Chairman’s Report – Now available, the edition of the Chairman’s Report for the Religious Freedom Coalition. In this issue by William J. Murray: In this issue: Obama’s support of “good” terrorists breeds more terror / Muslim Americans were among terrorist attacking mall in Kenya / Muslim bombing of church in Pakistan so brutal not even the American media could ignore it / American accused of helping al-Qaeda linked group cut loose by Obama’s DOJ / 8-year-old child bride raped to death on “wedding night” by Muslim husband / Tennessee high school students taken to mosque, given Korans – Read it here
Follow us on Twitter @rfcnet
Christian Bookstore and more – books, CD’s, DVD’s, cards and much more available at the Religious Freedom Coalition Internet Store. Please visit today!
https://religiousfreedomcoalition.org/wp-content/uploads/2013/10/ObamaAllies.jpg 277 400 Air Spark https://religiousfreedomcoalition.org/wp-content/uploads/2020/03/RFCFinal.jpg Air Spark2013-10-04 21:50:442013-10-04 21:50:44Washington Report - October 4th, 2013
0 replies

‘Pledge Of Allegiance’ Threatened In Massachusetts Case
Scroll to top