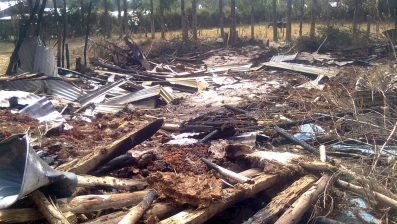 In February Obama asked Congress for money for Gaddafi / Obama’s Justice Department: Muslim’s should get special worker rights / Christians attacked in Ethiopia; no comment from White House / Congresswoman wants US out of UN Human Rights Council / Atheist to end “under God” fight? / 72 hour wait before abortion / Heaven’s Rain the movie / Ground Zero mosque to be funded by lawsuits? / Attacks on Christians in Ethiopia / Missionary killed in Jerusalem bombing

PRESIDENCY
OBAMA WANTED MORE MONEY FOR GADDAFI – In the middle of the revolutions in Egypt and Tunisa, President Barack Obama requested that the Congress double the military aid the United States provided Muammar Gaddafi. In February of this year Obama requested an additional $1.7 million in funds for Gaddafi’s military. Just a few weeks after he requested the funds to build up Libya’s military, Obama is now spending hundreds of millions of dollars to destroy it. Meanwhile, President Obama can’t figure out what the U.S. role in the war actually is.
THE JUSTICE DEPARTMENT AND THE HAJJ – A Muslim woman goes to work for a school. Nine months later she announces that she must go on the Hajj, a Muslim pilgrimage to Mecca that is required only once in a lifetime. She demands her employer give her time off and then allow her to return to her job. The school system says no, and immediately Attorney General Holder, not a junior official but the head of the Justice Department himself, steps forward to force the school to accommodate her. Jews are forced to work on Saturday, and being a Christian is no excuse for taking off a Sunday, but a Muslim has the right to demand time off at any time to go to Mecca? This move is purely political.
AND IN ETHIOPIA? – Just this month, more than fifty churches in Ethiopia have been bombed or burned and hundreds of Christian homes destroyed (see international below). Although the president seems interested in any Muslims that may be “repressed,” there is no evident concern at the White House for the continued slaughter of Christians in the Middle East and Africa.
THE CONGRESS
DEFUND U.N. HUMAN RIGHTS COUNCIL – Rep. Ileana Ros-Lehtinen, who is the chair of the U.S House Foreign Affairs Committee, called this week for the U.S. to withdraw from the U.N. Human Rights Council. Under President George W. Bush the U.S. did not participate, but President Obama joined the HRC which is for the most part made up of the worst human rights offenders in the world such as Cuba, China, Saudi Arabia and yes, even Libya. Ros-Lehtinen said the U.S. should quit the HRC and “explore credible, alternative forums to advance human rights.” For the most part the HRC passes resolutions condemning Israel for defending itself against terror and criticizing the the USA in one fashion or the other.
RELIGION AND CULTURE
ATHEIST’S “UNDER GOD” FIGHT TO END? – Atheist Michael Newdow has ended his quest to remove “under God” from the Pledge of Allegiance to the flag. Newdow said that for “reasons that are best not divulged” he would not appeal the case to the Supreme Court. That leaves the decision of the Ninth Circuit Court of Appeals in San Francisco from 2010 in effect.That ruling held that the words “under God” in the Pledge do not establish a religion. However, Newdow’s lawsuit challenging recitation of the Pledge of Allegiance in the New Hampshire public schools could arrive at the U.S. Supreme Court as soon as next week.
72 HOUR WAIT BEFORE ABORTION – Thanks to South Dakota’s Governor Dennis Daugaard for signing House Bill 1217 which was written primarily to stop coerced abortion, by requiring a 72 hour waiting period from the time an abortion agreement is signed until it is actually performed. National statistics show that 64% of women are coerced into having an abortion. Supporters of the abortion industry immediately filed lawsuits to prevent the law from going into effect.
HEAVEN’S RAIN – This week my wife and I attended a special screening of Heaven’s Rain, a movie about Brooks Douglass and his sister Leslie, who grew up in the home of a Baptist missionary-pastor and his wife. On Oct. 15, 1979, Brooks opened the door of their modest family home to what he believed was a man in need. The man, a drugged-up drifter named Glen Ake, along with another man named Steven Hatch took the family hostage, continually assaulted 12 year old Leslie and then shot all four family members. Brooks and Leslie somehow survived. The movie is compelling, with a strong Christian message, but the funds are not available for distribution. There are showings of the film at some churches and other venues and I urge you to visit HeavensRain.com for scheduling.
NO 911 MOSQUE!
GROUND ZERO MOSQUE DEVELOPER SUES TO RAISE MONEY – Apparently Ground Zero Mosque developer Sharif El-Gamal thinks the best way to be a good neighbor is to sue for enough money to build his temple to Islam. Sharif El-Gamal filed a $7.0 million lawsuit against Burlington Coat Factory, the tenant that was in the building during the 9-11 jihad attack against the United States. The suit claims that Burlington Coat Factory ripped off two signs on the exterior of the building in haste, doing millions of dollars in damage to the facade, due to their desire to distance the company from the mosque controversy. The total area of the damage is less than 150 square feet, so the lawsuit is asking about $46,000 per square foot for the damages. The lawsuit failed to note that El-Gamal plans to tear down the building to build his trophy to the 9-11 jihad attack. Read more
NO 911 MOSQUE – Visit the RFC site dedicated to the Ground Zero mosque controversy at http://www.no911mosque.org
INTERNATIONAL

ATTACKS ON CHRISTIANS IN ETHIOPIA – Muslims have attacked Christians and burned down 46 Pentecostal and 23 other Protestant churches in southwestern Ethiopia. The attacks began on March 2rd in Asendado, after imams spread rumors that a Qur’an was being flushed down the toilet at one of the churches. The nation is just 30% Muslim, but in areas where Muslims are the majority, violence against Christians is common. One of those areas is Besheno where notes are put on Christian homes telling them to convert or leave. The attacks in the area escalated during March, with an estimated 10,000 Christians fleeing the area because the government cannot contain the violence. The only news agency to report the violence toward Christians in Ethiopia has been Fox News. Additional sources report the destruction of Christian homes, schools and orphanages.
MISSIONARY KILLED IN JERUSALEM BOMB BLAST – Mary Jean Gardner, 59, of the Orkney Islands, Scotland was killed by a Muslim bomb planted at a bus stop in Jerusalem this week. She was a member of Wycliffe Bible Translators and was studying Hebrew in Jerusalem and staying at the Home for Bible Translators. Previously she had served with a Wycliffe team in Togo, translating the New Testament into the Ife language. Miss Gardner was studying Hebrew in Jerusalem, hoping to return to Togo to translate the Old Testament. In addition to the murder of Jean Gardner, six Americans were among a total of fifty people wounded in the blast. Hamas, which controls the Gaza Strip, took credit for the blast as well as numerous rockets fired into Israel in the last week.
CHRISTIAN INTERNET STORE
VISIT OUR INTERNET STORE – Our Internet store has more than books and CD’s. There is everything from candy to jewelry and all of it has a Christian theme. Unlike Amazon and other major Internet stores we do not sell porn and satanic materials right beside Christian books. Ours is a real Christian store with tens of thousands of items. Please take a look. The store is located at http://www.no911mosque.org
https://religiousfreedomcoalition.org/wp-content/uploads/2011/03/EthiopiaChurchremains1.jpg 224 397 Air Spark https://religiousfreedomcoalition.org/wp-content/uploads/2020/03/RFCFinal.jpg Air Spark2011-03-25 21:53:112011-03-25 21:53:11Report From Washington - March 25, 2011
0 replies