Thousands of Christian children have been forced out of Syria in recent years by Islamic State terrorists and other terrorist groups working to overthrow the government of Bashar Assad. They end up in refugee camps in Turkey, Jordan, and elsewhere where they have little hope for the future.

In the middle of this huge crisis the Religious Freedom Coalition does have aid programs and tries to help some, particularly the children. In the big picture perhaps we can’t do that much, but 100% of the aid we provide goes to Christians — unlike the USAID program that provides aid almost exclusively to Muslim Syrian refugees.

The Christmas for Refugees program that was so successful last year is being expanded. As of now, the plans are for 1,000 Christmas dinners to be served to Christian refugee children in Jordan and 1,000 more to children in Lebanon. Each child will take home to their family a box of staple foods valued at about $30 to $35. The ministry we coordinate with in Lebanon says they can easily expand the program to 1,500 or even 2,000 children — if we can raise the funds. Please pray that we can reach as many children as possible.

The Christmas for Refugees program is important because it brings hope. Please help provide the Christmas dinners and packages of food for the families. Donate today!

Update on Lebanon: We are planning ten Christmas dinners for Christian refugee children in Lebanon this year in addition to the program in Jordan. One hundred children will be served at each dinner. One of the dinners was to be held in Arsal, which was invaded and taken over by Islamists from Syria in July. Since then the Lebanese Army has recaptured the town, but ISIL and other Islamist groups are threatening to invade again unless the Lebanese release some of their fighters. As a result of the continuing conflict, we will not host a dinner in that city.

As of now all ten dinners will be held in the Bekaa Valley region where most of the refugees from Syria are now located. The situation is VERY different in Lebanon than in Jordan. Because of the complexity of the situation we will hire a local Christian to coordinate and monitor the setup of the ten dinner events during the months of November and December. In the long run this will be far cheaper than I or someone else flying over once or twice to check on the process.

This is the time to get to work on the Christmas program and your help is needed. 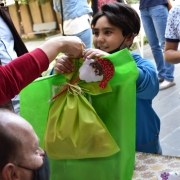