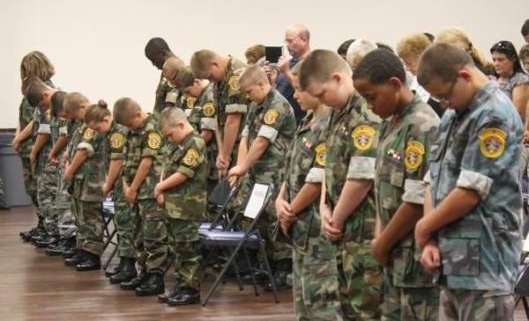 An Army Without a Soul

Obama’s army without a soul – Tech Sergeant Layne Wilson has just learned what Christians can expect in Barack Obama’s new “gay” affirming Armed Forces. Wilson is a 27-year veteran of the Utah Air National Guard and has been punished for protesting a “gay” wedding in the West Point chapel. Read more
Obama refuses to list Boko Haram as terrorists – How do Secretary of State John Kerry and Barack Hussein Obama define a “terrorist group”? Their definition, whatever it is, doesn’t include the Boko Haram, an Islamic terrorist organization based in Nigeria that routinely kills Christians and even children for being “westernized by education.” Read more
President Jimmy Carter attacks Baptists – Former President Jimmy Carter, who installed the women-hating Mullahs into power in Iran, is now claiming that women are abused in America because Catholics and Southern Baptists forbid female priests and pastors. Read more
Congress

An active Prayer Caucus – Contrary to popular belief, there are many godly men in Congress and many of them, both Democrats and Republicans, are members of the Congressional Prayer Caucus. This group of more than 100 congressmen do more than pray together each week — they also take action. Read more
No tax dollars for jihadists – The Religious Freedom Coalition has begun an online petition asking congressmen to speak out against any funding, military or otherwise, to jihadists anywhere in the world. The petition comes at a time the Obama Administration is furnishing help from the CIA, as well as cash and “humanitarian” aid, to jihadists fighting the secular government of Syria. Provide your name and zip code, and a copy of the petition will be faxed to your congressman free of charge. See petition here.
Religion and Culture

The mug shot of her highness the Saudi slave keeper

A Saudi slave escapes in California – Meshael Alayban, a Saudi Princess, has been arrested in Orange County, California on charges of human trafficking of a Kenyan woman who was her domestic slave. The woman escaped from captivity and flagged down a bus for help. Read more
CAIR attacks Florida professor – The Hamas-front group Council on American-Islamic Relations (CAIR) is attacking Professor Jonathan Matusitz for accurately stating that there is a connection between Islam and global terrorism. Read more
International
Egypt: Muslims murder more Christians – Following the shooting death of a priest in Northern Sinai and the murder of four Coptic Christians near Luxor, Christians are living in fear after first hoping that the deposing of the Muslim Brotherhood would ease their persecution. Read more
Syria: Massacre at Christian village – Obama’s so-called “Syrian rebels” continue to bring death and destruction upon Christians and Christian churches in Syria. They’re nothing more than bloodthirsty killers seeking to impose Islamic law on the Syrian people. Read more Clergy including two Bishops are still held by Obama’s “rebels.” Please sign the petition demanding their release.
Iraq: How the U.S. “fixed” Iraq – The Rev. Andrew White,pastor of an Anglican church in Baghdad, tells of the “terrible suffering” of Christians in Iraq. In the last ten years since Saddam Hussein was killed, 1,026 of his church members have been killed – 58 in one day. Iraq’s Christian population has shrunk from 1.5 million to around 200,000. Read more
Pakistan: Police torture and kill Christian boy – The Asian Human Rights Commission is reporting that Pakistani police who held a Christian boy in detention, tortured and killed him, have been exonerated from their crimes. Read more Related attack on Pakistani church
China: William Murray op-ed at WND – After a three week fact finding mission to China, I have written several editorials and columns. One of those at WND.COM reveals a change in attitudes toward Christians and discusses the difficulties in winning the lost to Christ in China. Read more
More from the Religious Freedom Coalition
New Chairman’s Report – Now available, the July 5th, 2013 edition of the Chairman’s Report for the Religious Freedom Coalition. This edition includes: – RFC chairman William J. Murray reports on his China mission / More RFC newspaper ads exposing the evils of Saudi Arabia / Suicide bombings for democracy and more. Read it here
My Life Without God – William J. Murray’s first book, My Life Without God, is now back in print, as 2013 marks the 50th anniversary of his atheist mother’s lawsuit to remove prayer from the schools. Murray writes of his life in the dysfunctional home of infamous atheist/Marxist leader Madalyn Murray O’Hair. Learn more
Christian Bookstore and more – books, CD’s, DVD’s, cards and much more available at the Religious Freedom Coalition Internet Store. Please visit today!