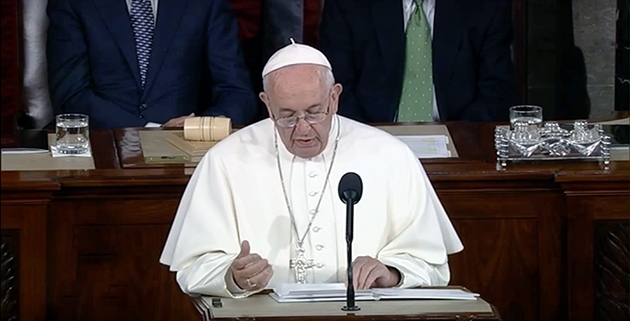 By George J. Marlin, chairman of Aid to the Church in Need U.S.A:

ON THE EVE of Pope Francis’ visit to the US, there were two significant developments with regard to the persecution of Christians in the Middle East: Rep. Jeff Fortenberry, Nevada Republican, and Anna G. Eshoo, California Democrat, introduced a Congressional resolution denouncing as genocide the crimes committed by jihadists against Christians and other religious minorities in Syria and Iraq.

Then came the presidential appointment — after a very long, inexcusable delay on the part of the administration, which was finally goaded into action by the papal visit — of Knox Thames as the Special Envoy to Promote Religious Freedom of Religious Minorities in the Near East and South Central Asia at the U.S. Department of State.

But will the Christians suffering in the trenches in Iraq and Syria feel the concrete benefits of these actions — neither of which drew much media coverage — on the part of Congress and the president? Will they make a real difference in U.S. policy with regard to the persecuted communities still clinging to their rightful place in the lands, the very places where the Christian faith was born?

Mr. Thames, for one, is wedded to the policies of the State Department, which thus far has handled the suffering of Christians poorly. Recall also the White House reference to the 21 Copts slaughtered by ISIS in Libya as “Egyptian citizens” and the consistent refusal to acknowledge ISIS and other jihadi groups are committing their crimes in the name of Islam. That extreme caution — labeling ISIS and its ilk simply terrorist organizations — and avoiding any criticism of Islam is extreme and frankly preposterous, not to mention hurtful and insulting to the victims of the radicals.

We can only hope that Mr. Thames will be motivated and able to break the mold. Persecution at the hand of Islamists — or for that matter, at the hand of Hindus, as is happening in India — must be recognized as a category under which Christians can apply for and be granted asylum.

The United States must also do what it can to provide those Christians committed to staying put in Iraq and Syria with all the humanitarian aid they need — aid programs must be tailored specifically to come to the aid of Christians; they also need political support, as in helping them gain permanent status and full citizenship in Kurdistan; and, as the situation requires, the military support to protect them from ISIS and other Islamic extremists. That is what many of the local bishops in the region want, although they are reluctant to say so out loud.

Addressing Congress and the UN General Assembly, Pope Francis but vaguely hinted at the tragedy that tens of thousands are being persecuted, deprived of their fundamental human rights, discriminated against and killed simply because they are Christians. He did call on the Western powers for an “examination of conscience” given their tolerance of the fact that the persecution of Christians by radical Islamists means second-class citizenship; job and education discrimination; abduction and murdering of clerics; destruction of Christian churches, homes and businesses by mobs; being kidnapped and sold into slavery — and it means being jailed or executed for practicing one’s faith.

Our bishops must now build on this papal wake-up call to remind the United States of its indispensable role to offer a rudderless world—that stands by as innocents are slaughtered—moral, political and military leadership; and our Church leaders must rally the faithful to start clamoring for real change in Washington–concrete action to help the persecuted and suffering Churches in the Middle East.”

George J. Marlin, chairman of Aid to the Church in Need U.S.A., is the author of “Christian Persecutions in the Middle East: A 21st Century Tragedy” (St. Augustine’s Press, 2015). The original version of this opinion column appeared in the The Washington Times.