In this issue of the newsletter
New:       Exposing Sunni terror – Our ISIS problem is our Saudi Arabia problem
New:       Christmas for Refugees program promoted at major conference
Update:  First major supply of diapers delivered to our ministry partner in Iraq
Update:  My new book went on sale March 8th and sold out at Amazon in two days!

Our ISIS problem is our Saudi Arabia problem

On March 5th I participated on two panels at The Awakening in Orlando, Florida. The Awakening is sponsored by the Liberty Counsel led by Mat Staver who is also the dean of the law school at Liberty University. Mat has brought numerous cases in defense of family values before the Supreme Court. This is a very important annual conference attended by thousands.

At the conference I led the Persecuted Church panel and also participated on The Threat of ISIS Around the World panel headed by General Jerry Boykin. Also on that panel were General Bob Dees, Dean Shawn Akers and former Muslim, Kamal Saleem. My remarks on this panel about the threat of the Saudi version of Sunni Islam were very well received. Dozens of people asked me for copies of it. WND.COM published my statement as a column on March 8th.

A copy of this statement is located at www.StopSaudiEvil.org along with numerous other articles and videos, as well as details of the Postcards to Congress campaign to stop Saudi evil.

The following was my statement on the ISIS threat and Saudi Arabia. William J. Murray speaking on a panel at The Awakening in 2016

ISIL, or ISIS, now calling itself the Islamic State, is part of a continuing Sunni Muslim problem. Here is some real history, versus the current media perceptions paid for by Saudi Arabia and other Gulf states.

Ask the media or any Democrat or Republican Senator, and they will tell you that Shiite Muslims (or Shia) are the greatest threat faced by Western civilization today. Besides Senator John McCain, presidential candidates including Senators Ted Cruz and Marco Rubio have both referred to the Shiite threat in virtually every stump speech, often citing the “Shia Crescent” that runs from Iran through Iraq and Syria and ending in Lebanon.

Senator Rubio constantly refers to “our Sunni allies such as Saudi Arabia” and has suggested the creation of a Sunni State in Syria.  Apparently the Senator is, just like former Secretary of State Hillary Clinton, unaware that there is already a Sunni state in Northern Syria, and it is run by the Islamic State otherwise known as ISIS or ISIL!

The Sunni Islamic State does have a competitor in Syria and that is al-Nusra, which is part of al-Qaeda and also a Sunni terror organization. The Army of Islam operating in Syria is also a Sunni terror organization supported by Saudi Arabia and Turkey. During battles between al-Nusra and the Islamic State, American led coalition aircraft have supported Sunni al-Nusra which is al-Qaeda. Which Sunni group to back in the Syrian Civil War is always a question for the White House.

In 2015 most of the 17,000 civilians killed in Iraq died at the hands of Sunni terrorists. That is more than five times the number killed in the Sunni terror attack on 9-11. The attacks on the World Trade Center and the Pentagon on 9-11 were conducted by al-Qaeda, a Sunni Terror organization. The first terror attack on the Trade Center in 1993 was financed by Khalid Sheikh Mohammed, a Sunni cleric also associated with the Sunni terror group al-Qaeda.

The 9-11 attack was planned by al-Qaeda from Afghanistan, which was at the time controlled by the Taliban, a Sunni Muslim group dedicated to the elimination of Shiites and Christians.

Sunni groups, many funded by interests inside Saudi Arabia and Qatar, declared responsibility for the 2004 Madrid train bombings killing 191 and wounding over 1,800. A Sunni group took responsibility for the 2005 London bus bombings killing 52 and wounding 700. Sunni terror groups were responsible for the massacre of 334 people including 186 children during the 2004 attack on a school in Beslan, Russia, and also the Moscow theater attack in 2002. The various Paris attacks including the 2015 Charlie Hebdo magazine and Jewish deli attacks over three days, and a later attack in November on a theater and restaurants that killed 130, were conducted by the Islamic State, a Sunni Muslim organization.

The Ft. Hood terror attack in 2009 killing 13 plus an unborn child was conducted by Major Nidal Hassan, a Sunni Muslim connected to a “vetted” Sunni Imam, Anwar al-Awlaki , who was allowed to speak at the Pentagon and Congress. Al-Awlaki and his son, both U.S. citizens, were killed by a drone strike though a death warrant issued by President Obama to shut him up lest he embarrass those at the Pentagon who had “vetted” him. He had been the Imam at the Virginia mosque attended by some of the 9-11 hijackers.

There have been numerous “minor” terror attacks against Western targets, such as the 2013 Boston Marathon Bombings that killed “only” three and wounded 264. The bombers were brothers from a family of Sunni Muslins who had immigrated legally to the United States from Chechnya, Russia. Other “small” attacks by Sunni Muslims in the United States include the following: A Sunni Muslim convert killed one at a Little Rock military recruiting center in 2009 and four Marines were killed by a Sunni Muslim immigrant in Chattanooga in 2015. Other Sunni attacks have been downplayed, such as the one in 2002 against an El Al ticket counter in Los Angeles Airport; “only” three died in that attack.

Most recently in the United States was the 2015 San Bernardino massacre which was carried out by a Sunni Muslim couple connected to Saudi Sunni extremists and influenced by the Islamic State. A total of 14 were killed and 22 wounded.

The most noted attack in India by Sunni Muslims from Pakistan was in 2008 when ten members of Lashkar -e-Taiba, conducted twelve coordinated shooting and bombing attacks over four days, killing 164 people and wounding 308. A landmark hotel, the Taj Mahal Palace, was nearly completely destroyed.

The mass beheadings of 21 Egyptian Christians in Libya that outraged the press in the United States for a few days in 2015 were conducted by a Sunni terror group. All of the slaughter in this Hillary Clinton established “democracy” is being conducted by three Sunni Muslim factions.

Now Back to the “Shia threat” alluded to by Hillary Clinton, John McCain, Senators Cruz and Rubio, as well as Secretary of Defense Carter. The last large scale Shia attack against the West was in 1983 against a military target in Lebanon at the U.S. military barracks, killing 299 American and French servicemen.

I have left Israel out of this analysis because it faces a Sunni threat from the south in Gaza and a Shia threat to the north. In line with the theology of the two groups, Sunni oriented Hamas normally attacks civilian targets while Shia Hezbollah usually attacks military targets.

With this history, why does the Obama Administration, like the Bush Administration before it, as well as both liberal and conservative members of Congress and virtually all presidential candidates, say the greatest threat is from Shia Muslims?

The simple answer is that Saudi Arabia is Sunni Muslim and most of the financing for Sunni extremist groups has come from Saudi Arabia which is “our ally.” The initial funding for the revolt in Syria which handed us the Islamic State problem came from Saudi Arabia. Over $2 billion in arms were moved into Syria from Turkey and prepositioned before the initial Sunni uprising that to this day Barack Obama and Senator John McCain insist was a secular revolt.

Some contend that only private elements within Saudi Arabia supported ISIS and never the Saudi government. Although Saudi Arabia may not directly support or fund ISIS, Saudi Arabia gives legitimacy to ISIS extremist ideology. Saudi textbooks are used in the ISIL controlled schools in Syria and Iraq.

If we want to cut off the real head of the snake, the Islamic ideology that threatens the world though the al-Qaeda and the Islamic State today, we must shut down the educational funding source and that is Saudi Arabia. Saudi Arabia runs a close second to North Korea on human rights abuses and should be treated to the same sanctions and boycotts. All Saudi printed literature and all funding of mosques and schools in the United States and Europe should be banned at once.

To stop ISIS, which is actually the second generation of al-Qaeda, we must dig out the root which is Saudi Arabia.

MUSLIMS INTEND THIS AS A MARK OF SHAME, BUT WE MUST WEAR IT AS A SYMBOL OF HOPE

(More information on Nazarene pins is located at www.PersecutedChurchPin.com.)

The Christmas for Refugees display table kept our volunteers busy the entire time of the conference. Hundreds of brochures were distributed and several pastors who were at The Awakening conference expressed interest in getting their churches involved.

Just a few days before the conference our first major delivery of diapers was made to our ministry partner in Iraq. Photos of the truck unloading had been forwarded to us from Erbil and those were on display as well.

Utopian Road to Hell: My new book, Utopian Road to Hell, was officially published on March 8th, but I had obtained a few boxes of books in advance. We set up a second display table next to our Christmas for Refugees table to make the book available.

The sales of the book went extremely well because it comes at a time when a presidential candidate who is winning state primaries has proclaimed himself a “democratic socialist” and promotes the Utopian  dream of a centrally planned state with free education and medical care for all.

This was the third year for the Religious Freedom Coalition to participate in The Awakening in Florida. Most of the events such as this where we have large display tables or booths are held in Washington, DC such as the Values Voter Summit and Watchmen on the Wall. The pull up displays are particularly useful for smaller events such as those we attend on Capitol Hill with limited participation. I also use them as backdrops when I do television interviews using Skype from my office. Truckload of diapers supplied by the Religious Freedom Coalition unloaded at a ministry warehouse in Erbil, Iraq

The Diaper program: When our Iraqi ministry partner visited Washington in February, we talked about expanding the Christmas program and about current needs of the refugees. He told me at the time that while Americans think to send clothes and food, what babies really need are diapers. He described the need as desperate.

The first week of March we delivered a 30-foot truck load of new high quality diapers to the ministry warehouse in Ankawa, Iraq. Within days, families in need were registered and the distribution began. As I visit with congressmen and Senators on Capitol Hill I will remind them of the suffering of these Christian families that has come about because of a Sunni inspired war against the Syrian government – a war which to this day the Obama Administration supports. The misery of these families affects me deeply when I am in Iraq.
William J. Murray, Chairman 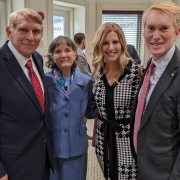