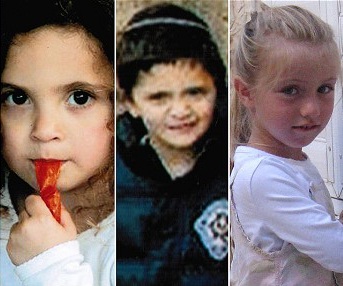 KILLER JUST A NORMAL MUSLIM –Rabbi Yonatan Sandler, his two sons Aryeh 6, and Gavriel 3, together with eight year old Miriam Monsonego were murdered by a Muslim jihadist at a Jewish school in Tourlouse, France. The Muslim killer, Mohamed Merah, was holding little Miriam by the hair so she could not run when he shot her in the head. Yaacov Monsonego, the principal of the Ozar HaTorah School in Toulouse and the father of Miriam, witnessed the atrocity. The Muslim was attempting to ride his motorcycle into the synagogue but was miraculously blocked by a lecture. Mohamed Merah’s goal was to kill as many Jewish children as possible to buy himself a ticket into Paradise so he would be at the side of his namesake and receive his 72 virgin pay off the Qur’an promises for murders such as these.

An English teacher at a French school asked her students to observe a “minute’s silence” for the Muslim murderer Mohamed Merah. At the Gustave Flaubert High School in Rouen, Normandy, Lorraine Collin, 56, described the terrorist as being the ‘victim of an unhappy childhood’ and told her students that the reports of his being associated with terror groups were fabricated. This prompted up to 15 pupils aged between 17 and 18 to storm out of the classroom and report her to their headmaster. At least some of the teenagers in France have some common sense, something that cannot be said for the French government which ignores Muslim hate crimes while enforcing strict censorship of any comment deemed defamatory to Islam.

Refusing to recognize the nature of jihad inspired attacks has been the norm in France for years. The French Muslim gang led by Youssef Fofana, kidnapped and tortured Ilan Halimi to death in 2006. They took many photos, as did Mohamed Merah, to display their devotion to Allah. Halimi’s body had been disfigured and over 80% of his body had burns. Despite the gang’s clear statements that the sole reason Halimi was kidnapped, tortured and murdered was that he was Jewish, the French police refused to treat it as a hate crime.

Last year the offices of the satirical French magazine Charlie Hebdo were firebombed in Paris. Its website was hacked and Islamist propaganda was posted there. All because the magazine made a comic remark that it would be ‘guest edited’ by the Prophet Mohammed. The staff for the most part are atheists who hold nothing sacred, and the magazine attacks Christian practices constantly. Despite hatred spewed from mosque pulpits inciting violence against the magazine, no action was taken by French police.

On the other hand in 2005, politician Jean Marie Le Pen, runner-up in the 2002 presidential election, was convicted of inciting racial hatred for comments made to Le Monde in 2003 about the consequences of Muslim immigration in France. In 2008, actress Brigitte Bardot was charged and convicted of inciting racial hatred for her criticism of the ritual slaughter of sheep during Ramadan. The elderly actress, who is an animal rights activist, was forced to pay a fine of €15,000, almost $20,000.

Hatred of Jews and Christians is preached from the vast majority of mosque pulpits each Friday in France. To show their contempt of Western society, imams frequently lead worshipers into busy French streets during rush hour on Friday to pray on their knees, sometimes closing down entire neighborhoods and disrupting businesses. French authorities do nothing.

In majority Muslim neighborhoods of Paris and Marseilles, neither police nor firemen will respond because of fear. Sharia law is enforced by the armed followers of imams who are in fact local warlords.  France is not an isolated case study of a nation or a people submitting to Islam out of fear. The situation in the United Kingdom is even worse.

LONDON MAYORAL CANDIDATE LOVES MOHAMMED – London mayoral candidate Ken Livingstone calls Prophet Mohammed’s words an “agenda for all humanity” in a bizarre attempt to buy votes from the Islamic community. Livingstone frequently refers to Jews as Zionists and displays a hatred for Jews.

Livingstone was mayor from 2000 to 2008 until he was unseated by conservative Boris Johnson. He wants to get his old job back by riding on the anti-Semitic camel of radical Islam. On March 19th his campaign remarks were reported by The Telegraph, a UK daily newspaper:

“Ken Livingstone has promised to turn London into a “beacon” for the words of the Prophet Mohammed in a sermon at one of the capital’s most controversial mosques.

Mr. Livingstone, Labour’s candidate for mayor of London, pledged to “educate the mass of Londoners” in Islam, saying:  “That will help to cement our city as a beacon that demonstrates the meaning of the words of the Prophet.” Mr Livingstone described Mohammed’s words in his last sermon as “an agenda for all humanity.”

He praised the Prophet’s last sermon, telling his audience: “I want to spend the next four years making sure that every non-Muslim in London knows and understands [its] words and message.” He also promised to “make your life a bit easier financially.

WINSTON CHURCHILL ON ISLAM – I now want to compare Mayor Ken Livingstone to one of the greatest British leaders of all times, the man who led and saved the United Kingdom during World War II. Below is a quote from Winston Churchill’s book, “The River War”written more than a century ago: How dreadful are the curses which Mohammedanism lays on its votaries! Besides the fanatical frenzy, which is as dangerous in a man as hydrophobia in a dog, there is this fearful fatalistic apathy. The effects are apparent in many countries. Improvident habits, slovenly systems of agriculture, sluggish methods of commerce, and insecurity of property exist wherever the followers of the Prophet rule or live. A degraded sensualism deprives this life of its grace and refinement; the next of its dignity and sanctity. The fact that in Mohammedan law every woman must belong to some man as his absolute property – either as a child, a wife, or a concubine – must delay the final extinction of slavery until the faith of Islam has ceased to be a great power among men.

Individual Moslems may show splendid qualities. Thousands become the brave and loyal soldiers of the Queen; all know how to die; but the influence of the religion paralyses the social development of those who follow it. No stronger retrograde force exists in the world. Far from being moribund, Mohammedanism is a militant and proselytizing faith. It has already spread throughout Central Africa, raising fearless warriors at every step; and were it not that Christianity is sheltered in the strong arms of science – the science against which it had vainly struggled – the civilisation of modern Europe might fall, as fell the civilisation of ancient Rome.

Winston Churchill feared the expansion of Islamic domination into Europe and warned of the true nature of Islam decades before the Mufti of Jerusalem blocked entry of Jews into the Middle East during World War II so that Hitler might be able to kill more of them. The Muslim leaders of the Middle East and North Africa were helpful to Hitler’s Germany. Turkey, which was officially “neutral” during the war, sold hundreds of millions of dollars of supplies to the German army and acted as a supply conduit. Much of Hitler’s armament funds came from the confiscated property of the millions of Jews he murdered.

UK: YEAR IN JAIL FOR ISLAM INSULT – On March 6th, 2012, Darren Conway was sentenced to a year in prison for posting anti-Islamic materials in the window of his ground-floor apartment in Gainsborough, Lincolnshire. As the BBC puts it, he was “convicted of a religiously aggravated public order offense for putting anti-Islamic literature in his window.” This is Sharia law in action.

UK: CHRISTIANS HAVE NO RIGHT TO WEAR CROSS – Christians do not have a right to wear a cross or crucifix openly at work, the British government will argue in a landmark court case. In a highly significant move, government ministers will fight a case at the European Court of Human Rights in which two British women will seek to establish their right to display the cross. It is the first time that the government has been forced to state whether it backs the right of Christians to wear the symbol at work.

MOROCCO: FORCED TO MARRY RAPIST – A 16-year-old Moroccan girl has committed suicide after a judge ordered her to marry her rapist, according to Moroccan media reports. Last year Amina al-Filali’s parents filed charges against their daughter’s rapist, a man ten years older than her, but it was only recently that a judge in the northern city of Tangier decided that instead of punishing him, the two must be married. (Winston Churchill rings true!)

SPAIN: Abdeslam Laarusi, an imam at the Badr mosque in Terrassa near Barcelona, gave instructions during Friday prayers on how to beat women without leaving marks. The imam advised using “fists and sticks on various parts of the body” according to investigators. Police investigators said, “He provided concrete examples of the manner in which wives should be beaten, how to isolate them inside the family home and how to deny them sexual relations.” Apparently Spanish authorities have not received the memo from EU headquarters in Brussels that Muslims have an exemption from “hate crime” laws. Just ask Ken Livingstone.

OBAMA’S EGYPT – The “democratic” Egypt which President Obama and his ally Senator John McCain fought for has a new “democratic” parliament. One of its first acts was to declare Israel an enemy and call for a complete boycott of that nation, while supporting the terrorist operations of the Palestinian “resistance.”

This is just one section from the resolution passed by the new Egyptian parliament: “Post-revolutionary Egypt will never be a friend, partner or ally of the Zionist entity, which we see as the foremost enemy of Egypt and the Arab nation. Egypt will treat this entity as an enemy, and the Egyptian government should reconsider its entire relationship and agreements with this enemy and the threat it poses to the security and national interests of Egypt.”

Obama and McCain have helped create a situation that will lead to a new Middle East war on a grander scale than ever before. Their support of “rebels” in Libya has literally brought an offshoot of al-Qaeda to power in that nation. In Tunisia, what was a secular leaning nation now has a Muslim Brotherhood parliament thanks to the Obama-McCain partnership to bring “democracy” to the Middle East, a brand of democracy that persecutes Christians.

OBAMA AND MCCAIN TARGET SYRIA – Whenever we read about bombings in residential neighborhoods in Aleppo, Hamah, or Latakia, Syria, the victims are probably Christians. In March, Christian upscale neighborhoods in Aleppo were bombed by the “rebels” supported by President Barack Obama and Senator John McCain. The major rebel city, Homs, is a stronghold for radical Islamists who want all Christians and Jews cleansed from the Middle East. It is no surprise that the EU and the USA support the ‘rebels” who will bring the same kind of democracy to Syria as was brought to Libya — Sharia law.

Senator McCain is less constrained in his support of the al-Qaeda affiliated “rebels” than is President Obama. McCain has called for the bombing of Syria and the arming of the rebels. The current dictator of Syria is a ruthless murderer; however, those supported by Obama and McCain are also ruthless murderers, but with an Islamic radical agenda.