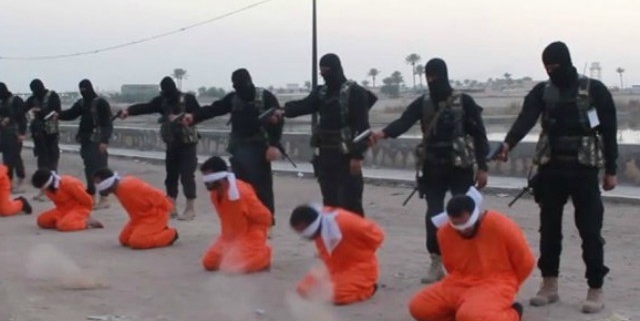 A gun-toting child watches an ISIS execution in the march toward Baghdad.

In an interview with Russian Today, Sarmad Ozan, a 25-year-old former deacon of a church in Mosul, Iraq, explained that the British Home Office

denied him asylum and wanted to send him back to Iraq, where he believes he will die because he is a Christian.

Ozan left Mosul in June 2014 when ISIS took control of the city. He calls the violence in the Middle East a “slow-motion genocide” being committed against Christians in Iraq every day:

“They are killing them day after day, 10 people in one day. Or maybe they will bomb a church. From 2003 until 2014 they used to bomb churches inside Mosul. They killed bishops and priests inside Mosul and even Baghdad and everywhere in Iraq. And the government cannot do anything for them.”

“The situation there is unsafe and unstable. Even the Home Office admit that it is unstable inside Iraq and don’t advise anyone to travel to Iraq, but they want us to go back.”

Ozan described life in Mosul after the ISIS takeover. When ISIS first gained control in June, they didn’t kill anyone and they announced they only had an issue with the government. Christian families who orginially fled returned back to Mosul.

However, in July, “they announced in the mosque three options for the Christians inside Mosul. They say you should convert to Islam, or pay jizya, that’s like a heavy tax, or be killed after this 24 hours. So every Christian family left Mosul that day… They made checkpoints at the borders of Mosul where they checked identity cards, because your religion is on your identity card.

“So whenever they see a Christian they grab everyone from the car and they take everything. So we left with nothing. We walked all that day towards Erbil. All the Christian families were walking that day. We arrived at night. Young people slept on the pavements, some people in tents, the church halls. We stayed in different places. Then we found a place in a church hall.”

Christian Today reported: “Ozan is unable to apply for asylum in Iraq’s neighbouring Arab countries, but in 2015 he graduated with an engineering degree. He was then given a state bursary to study a masters in the UK. But after he arrived in Britain, violence spread across Iraq and his government scholarship money stopped, leaving him stranded. Feeling unable to return to the risk of death in Iraq, he applied for asylum.”

Religious Freedom Coalition sponsors two programs to help Christian refugee families that escaped this persecution in Mosul, Diapers for Refugees and Christmas for Refugees. The Diapers for Refugees program which aims to send high quality disposable diapers to these Christian refugee families located in camps around Erbil. Families in these camps are dying from diaper rash because of the inability to wash cloth diapers with soap and clean water. Due to the lack of diapers, mothers are forced to use donated clothing as diapers for their children, which still can’t be cleaned properly.