Purchase authorized — shipment expected: Every three months the Diapers for Refugees program orders 160,000 diapers for infants in Christian refugee centers in Iraq.  Our goal for 2017 was 640,000 diapers. The infant diapers are manufactured in Turkey and of very high quality.  We do not buy the cheapest diapers available, as they are not absorbent and children have developed rashes from them.  Our goal is to help families avoid diaper rash that can become deadly in extreme cases.

We buy our diapers from a wholesaler in Dohuk, Iraq which is closer to the Turkish border, and truck them to our warehouse in Erbil for distribution over three months.  Iraq is not a third world nation.  Up until the Second Gulf War the rate of college graduates was similar to the United States.  So many schools have been destroyed since our invasion in 2003 that educational levels have dropped.  Christians have been hit hard by the lack of schools as they have been forced from their homes.

I visited Dohuk in June.  It is a large modern city of about 300,000 that has escaped most of the ravages of war the last 13 years.  It is also the location of Camp Odrana which we assist with water and which is managed by the Assyrian Aid Society. The cost of the diapers has not increased but there are some needs we were not aware of at first.  The women we give the diapers to are young mothers much in need of feminine supplies such as sanitary pads.  I managed to find enough funds for those mothers receiving the diapers in June.  Then we learned that some of the very elderly were coming to our distributions  begging for some of the larger diapers so they could try to use them for incontinence.

Out of our general fund I paid for adult diapers for the relatives of those active in the diaper program. BOTTOM LINE: I need some funds to continue distributing the sanitary pads and adult diapers.  The demand is not great enough to begin a major campaign, but I have added the need to the list of needs sent with every issue of the Chairman’s Report.

After distribution of the September shipment is completed,  there will be one more shipment of 160,000 diapers in December. The diaper distributions in December will begin at the same time as our Christmas program in Iraq.  Distribution has become more difficult as some families attempt to move back to rebuild their destroyed homes.  In June I was present when we distributed diapers in Qaraqosh, a town near Erbil which was completely overrun, looted and all but destroyed by ISIS. 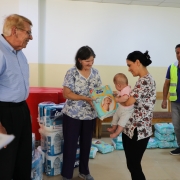