In this issue of the newsletter
Update: Airlines cancel our mission trip to Nigeria / Farm program continues
Update: School building at IDP camp in Benue state complete / Desks to be moved in
Update: Diaper program – Many issues continue as needs of vulnerable grow
New: The state of Iraqi Christians is dire. Our diaper program is helping

Four flight cancelations distressing: Our original flights to Abuja, Nigeria were scheduled for July 14th. Three weeks before the trip, the flights were canceled by Air France. Because we were notified early, I was able to make schedule changes internally in Nigeria and the mission trip was moved to July 19th on Air France. Two weeks before the trip Air France advised us the flights would not operate – and in fact the service had been suspended entirely.

I re-booked the flights on Lufthansa for July 19th. A week before departure I checked to make sure of seat assignments and…wow! Only a night trip to Frankfurt was at the Lufthansa Internet site. The flight from Frankfurt to Abuja had been canceled days before, and I was never informed by Lufthansa … No email, no call. Nothing.

I moved the flights to the 20th and delayed the return by one day …. and then … just 72 hours before departure one of the return flights was canceled!

The schedule had been so damaged by flight cancellations that this time I could not fix it. The entire trip had to be canceled.

Several people have written me to ask if I know Pastor Greg Tweddell who also has a mission team in Nigeria. The answer is yes. In fact, I and my wife Nancy were going to meet Greg and his wife in Abuja and drive together to Makurdi in Benue state. Because of scheduling issues and flight cancellations, Greg also had to cancel his July trip to Nigeria.

Right now, international airline flights are not dependable at all, and scheduled flights may or may not take place.

The airlines did not expect the tremendous demand, and there are now pilot and mechanic shortages. It can take weeks to prep an aircraft that has been in storage for over a year and make it safe for flight.

Those technical issues may be the reason I was forced to cancel the Nigeria mission trip, but not the spiritual reasons. I thought it was Satan trying to stop me, but Satan can be overcome with prayer. I prayed hard and I fought hard to go and still had the last door slammed shut.

The doors slamming shut on this mission trip may have been the Lord telling me over and over again not to make the trip at this time.

When that last door slammed shut and the scheduling just would not work, I was forced to give up and cancel the trip. Immediately I had a peace about canceling the mission, as if the Lord had placed His hand on my shoulder and said to me, “A better time will come.”

The timing may not be right, but the mission still lies before us.

Somehow, this year I believe we will visit the orphanage in Plateau State and the IDP camp in Benue State where we funded the construction of a school building.

The building has three 60 Sq. meter classrooms. (About 645 Sq. ft. each. Each classroom will accommodate 40 students. In all, 120 students at the IDP camp will have a place to go to school.

The Religious Freedom Coalition is not only constructing but fully outfitting the school for the TIV Tribe. We are furnishing desks, chairs, and curriculum materials. This includes bookbags, pens, pencils, etc. for the students. We also supplied the teachers’ materials.

Each student will also receive a Bible. Because the program is operated by the TIV Tribe and not the United Nations, lessons are Christian based and will include Bible studies.

There are three Daudu IDP camps, and there were similar empty buildings available at Daudu camps 1 and 2 that the TIV tribe obtained for school use. We supplied the desks, chairs, and class materials to make the school rooms at those two IDP camps usable for students.

Please be in prayer that the children we have provided school rooms for at the three Daudu IDP camps will be protected from attacks.

*The following was written before attacks began at the orphanage in Plateau State. Please click here for information on the attacks*

Reports of normalcy: I receive reports from the orphanage in Plateau state almost every day. The children had worked awfully hard on producing a program to show off their Bible skills when we were going to be there in mid-July. The children were extremely disappointed that I and Nancy would not be visiting them. We are in prayer about a trip later this year.

Reports I have seen indicate that the food program continues to do well and that all the children are healthy. We have had no reports of major illness since we installed a new water system in 2019. The kitchen needs some new equipment, but we can deal with that later. We have had no cases of Covid-19 despite the evacuation, and despite temporarily housing some children at locations in Jos and other areas.

Mission Programs in the Middle East

Bethlehem and the West Bank: Over the past few months I have referred to our “adult” diaper program in Beit Sahour and Bethlehem, and we do assist many older adults there who are in special needs housing. Often a bed and food are provided, but there is little money for medical care or expensive adult diapers.

There is a second category of diaper recipients who are neither infants nor adults. These are children who are no longer young enough for baby diapers but still in need of diapers because they are unable to take care of their own sanitary needs. The special diapers for these children, ranging in age from three years up to early teens, are very costly in the “West Bank.”

Much of the cost has to do with taxes. We pay no tax for diapers purchased in most areas such as Iraq because of the tax exempt status of our partners. But in areas such as Bethlehem we are forced to pay a double tax. Everything in Bethlehem has both an Israeli and Palestinian Authority tax. These taxes increase the cost drastically.

I have been working hard to find ways around paying the taxes so we can help more children and adults in critical need.

We purchase Holders Brand for handicapped children and youth. These are special diapers designed for the handicapped and are very costly even before the double tax. The small diapers are 40 cents each, medium 48 cents each and large 59 cents each. Overall the average is 50 cents each and we supply three diapers per day or $45 a month on average.

The cost may sound high, but it isn’t. This is about the same cost as bulk boxes of adult diapers from Costco in the United States. Without the double tax in the West Bank the cost would be much less than the Costco price in the USA. Without the tax we could buy more and help more special needs Christians who are in poverty.

There are many special needs children and youth on our waiting list. Please pray that costs can be lowered so we can help more special needs Christians in poverty in the Holy Land.

In Bethlehem our diaper program is called Heart for the Persecuted Church, not Diapers for Refugees, because these Christians are not refugees. Some of these families likely have ancestors who saw in person the Apostles, and maybe even the Lord Jesus.

Israel is one of the wealthiest nations in the world, but Bethlehem and the Christian villages in the West Bank are not in Israel. In Bethlehem, the birthplace of Jesus, Christians live in fear and poverty. I am doing my best to gather support for these deprived Christians.

The adult diaper program in Jordan continues to grow as it has in Bethlehem and other West Bank towns, but because of lockdowns delivery has been a huge problem.

Iraq: There are continuing challenges for Christians in Iraq as the Christian population continues to decline. Those Christians who have enough money are leaving, and those without the money and resources struggle and are being left behind.

Let’s face reality … the wealthy are the job creators. Billionaire Elon Musk has about 48,000 people working for him at Tesla and SpaceX, many with high paying jobs. About three times that number of people are employed by other companies supplying materials, parts and services to Tesla and SpaceX. None of this includes the products and services all those people buy, from haircuts to groceries.

Without wealth for investment, there are few or no jobs. As the wealthy Christians leave for Europe and South America, jobs for the less fortunate are not going to be supplied by Muslim employers — at least not good jobs. Most of the Middle Class that could get out of Iraq have already left, including the skilled engineers and doctors.

Will the wealthy job-creating Christians and middle class return to Iraq? No. The nightmare has recurred too many times. While Christians were offered some protections under the secular dictatorship of Saddam Hussein, most have been run off from their homes, stores, and factories more than once by advancing Sunni Jihadists of one stripe or the other.

Christian owned businesses were bombed by the United States because they were being used by the Islamic State. Stores and warehouses they owned were looted by the Islamic State and their homes were destroyed. The wealthy, many of whom had savings in European banks, have fled and will not return. The middle class mostly left as they could, many to Syria.

That leaves mostly poor Christians in a nation that now has a Constitution stating that the government shall not pass any law that contradicts the Quran. The former secular dictatorship may have been brutal, but it was equally brutal to all.

Officially the Christian population of Iraq in 1991 before the first Gulf War was well over one million. The 1987 census counted 1.4 million Christians. When the Pope visited Iraq in March of this year, there were just 250,000 Christians remaining.

In the midst of the decline the Religious Freedom Coalition is trying to help the most vulnerable Christians who remain, and there are many. Thousands of Christians were wounded during the two Gulf wars and numerous terrorist attacks. Many lost limbs, others suffered internal injuries that left them unable to care for themselves. An incredible number are in wheelchairs. I have been in their homes; I have prayed with them.

To help these mostly poor and vulnerable Christians, the Religious Freedom Coalition needs the help of more supporters.

Please pray with me that more American Christians will learn of the need and that their hearts will be touched to help us aid the Christians of the Holy Land and the rest of the Middle East. Together we can improve the lives of the downtrodden church in the Middle East. 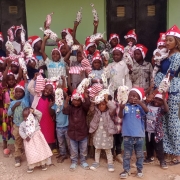 Building rented for children from destroyed orphanage
Scroll to top