A meeting with John X: In October it was my great pleasure to meet John X, the Patriarch of Antioch and All the East. John X has served the Orthodox Church of Antioch for most of his life. He was born in Latakia, Syria in 1955 and has numerous degrees including civil engineering and a doctorate of theology. His brother, Bishop Boulos Yazigi was kidnapped in 2013 along with Bishop Yohanna Ibrahim, by Sunni Muslim jihadists probably supported by Saudi Arabia.  They have not been heard from since, and are unfortunately presumed dead.

Most Syrian church officials and almost all Christian Syrians, even refugees, are refused visas to the United States. In the case of John X, the State Department had to issue a visa because the Antiochian Orthodox Church has nearly seven million members in the United States — many of whom are Americans not of Middle Eastern descent. It is now the fastest growing U. S. denomination.

While in America, John X has been accompanied to meetings by Metropolitan Joseph, who is Archbishop of New York and Metropolitan of all North America. The Antiochian Orthodox Church in the United States is Western Order, meaning that hymns and other rituals of the church are very familiar to Americans.  I met both John X and Metropolitan Joseph after their presentation at the Hudson Institute event chaired by my good friend Nina Shea, who at one time served on the United States Commission on International Religious Freedom.

During that presentation John X expressed the love of Jesus for all, and stressed the unity of Christian denominations in the Middle East during the turmoil of wars sponsored by “outside interests.” He did not identify those interests.

Metropolitan Joseph did address some aspects of the civil war in Syria, stating that what is presented by Fox News, CNN, the major networks and the newspapers is not at all accurate, even stating that not even one percent is true. He made it clear that he did not believe Americans have been hearing the truth.

I spoke to both John X and Metropolitan Joseph about our Christmas program. There is an interest in bringing the program to Syria at some time in the future.

Officers saved congressmen during shooting: I am involved in many events and interactions on Capitol Hill which are never mentioned in the Chairman’s Report, for lack of space. It takes a lot of space to report on our programs in the Middle East, and on the difficulties of moving Congressional bills such as HR-390 to help persecuted Christians. For the most part, I feel that you would probably rather hear about what the Religious Freedom Coalition is accomplishing, than to hear about the various prayer meetings, social events and award ceremonies I must attend and be part of. Yet these events are important, in order to keep a high profile for our work on Capitol Hill. 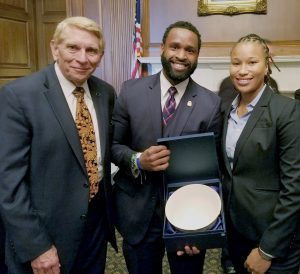 Presentation of Policeman of the Year Award

One of the events I was recently a part of was the presentation of the Policeman of the Year Award by the Capitol Forum Club. This is a Club which has met for breakfast inside the Capitol Building for decades, and for the most part is made up of retired generals and admirals.

Their award is given to a Capitol Hill police officer each year. This year the honor went to two officers who undoubtedly saved the lives of numerous congressmen, by engaging in gunfire the far-left gunman who targeted Republican congressmen as they practiced for an annual charity baseball game against Democrat congressmen. Both recipients of the award,  Capitol Police officers David Bailey and Crystal Griner, were wounded during the shooting. Special Agent Griner was still using crutches as she accepted her award.  The awards were given after a special breakfast in the historic Mansfield Room of the Capitol Building. It was my great honor to meet not only these officers, but the Chief of Capitol Hill Police, Matthew R. Verderosa who has been in law enforcement for 31 years.
[su_button url=”http://christmasforrefugees.org/donate/”]Please help a Christian refugee child have a real Christmas[/su_button]

Promoting our programs on Capitol Hill: Each year the Religious Freedom Coalition sponsors or pays for exhibit space at gatherings of social conservatives such as the Values Voter Summit in Washington, DC. The primary sponsor of this event is the Family Research Council headed by Tony Perkins. Many well known politicians and others speak. The event also features breakout and discussion groups 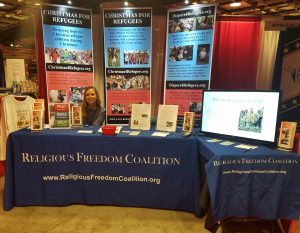 This year President Trump spoke to a very crowded main auditorium filled with thousands. It was the first time a President still in office has ever spoken at the Values Voter Summit.

Other speakers included congressmen,  Senators and notable conservatives. One speaker who received a standing ovation was House Majority Whip Steve Scalise who was shot by a leftist extremist at the practice baseball game mentioned above. It was his first public speaking appearance after being released from spending several months in the hospital, including weeks in intensive care.

No more sanctions on Sudan’s murderous dictator: The Sudanese Church of Christ in Khartoum was stormed by police during the service on Sunday, October 22nd.  Services were prevented from continuing, and an order of closure of the church was presented. 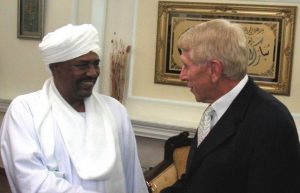 Just weeks before, all sanctions against the Sudan and its murderous dictator were lifted by the Trump Administration, with the consent of Congress. The dictator of the Sudan, President Omar al-Bashir, has been indicted by the International Criminal Court (ICC) as a war criminal, and there is an international arrest warrant for him in effect. The planning for the 1998 bombings of U.S. embassies in Kenya and Tanzania were done in the Sudan under the watchful eye of this mass murderer, who has long practiced genocide against Christians.

Our government has now removed sanctions that had been imposed on the Sudan, even though the murder of Christians continues in the Nuba Mountains under al-Bashir’s rule. The arrest warrant by the ICC for crimes of mass murder in Darfur, and the status of Sudan as a State sponsor of terrorism, were both still recognized and backed by the United States as recently as May of 2017 under the Administration of President Donald Trump. That has all changed now.

“Why?” one might ask. Perhaps it is because American oil companies and banks can now do business with the Sudan, even as Christians continue to be persecuted.

I once met in person this monstrous mass murderer, al-Bashir, who had for decades bombed Christian hospitals, schools and churches in the Sudan. It was in 2006, while on a fact-finding tour in Darfur. He greeted me and the congressional delegation I accompanied with big smiles that could not hide his desire to kill all of us.

Today,  sanctions and embargoes by the United States continue against nations whose leaders were elected. If any nation should be sanctioned, it is the Sudan and its murderous leader.

Refugees I met in Dohuk in June now forced out of homes: The Religious Freedom Coalition is assisting with the purchase of water for Odrana Camp in Dohuk, Iraq. The Christians in that camp are Assyrians who were forced from the northern areas of the Nineveh Plain by the Islamic State (ISIS). Those areas included the town of Telskuf, which for a while was occupied by the Islamic State and served as one of their strongholds in the Nineveh Plain.

Then, the town was leveled by American and Coalition aircraft after Navy Seal Charles Keating IV was killed there by a sniper. He was “advising” a Kurdish Peshmerga unit trying to capture the town from ISIS. Every Christian who has moved back since the Islamic State retreat knows and honors Keating’s name. About 1,000 Christians had recently moved back to Telskuf, including some from Odrana Camp, which our organization helps support in Dohuk.

Now, the Christians are being ordered to move out of Telskuf again! The area has been occupied by the Kurdish Peshmerga, even though it is not a Kurdish area. The Kurds are declaring they own it, and Iraq wants it back as a part of Iraq.  So the Christians lose out again.

All Christians were ordered to evacuate Telskuf again, to spare themselves being caught in the middle of a battle. The order came too late for some, who had already been killed or wounded in the crossfire. 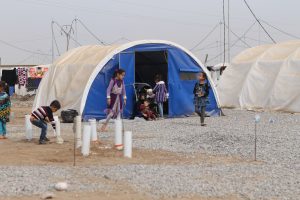 Christian families have been forced to flee their homes and live in make shift camps.

When the United States invaded Iraq in 2003 to change the regime and install a “democracy,” there were 1.5 million Christians in Iraq. There are now only about 200,000. During my meeting with Patriarch John X,  I learned that one million Iraqi Christians fled to Syria as they were being robbed and killed by the roving bands of Sunni militias in Iraq. Only a couple of hundred thousand of the wealthiest made it to Europe and the United States.

American diplomacy operates on at most a four-year cycle. All our military efforts are to achieve short-term strategic goals and not long-term results. The Kurds were armed with advanced American weapons to achieve a short-term victory over the Islamic State, with no thought of what the weapons would be used for once the Islamic State was gone. When Kurdish leader Barzani declared independence from Iraq as the stated goal of Kurdistan, he also declared: “Our borders lie where our tanks stop.” Iraq took this as a declaration of war because the Kurds occupied oil fields well outside of Kurdistan.

Now the Christians are once again caught, with no guns, in the middle of a gun fight.

Our Christmas plans for Iraq going ahead despite obstacles

Iraqi Christian children will have a Christmas celebration – one way or another: The Religious Freedom Coalition is moving forward with plans for our Christmas for Refugees program in Iraq. In some cases, the only question that remains is where the children will be. One of the new towns in which we intended to hold a Christmas program was Telskuf. It now appears that the children who would have been there, will be back in camps in Dohuk Province. I am in constant contact with our ministry partners in Iraq, to keep up to date on the situation.

I can report some good news — the director of the ministry which administers our programs in Iraq has made it back to Erbil, Iraq, along with his wife! They were in the U.S. on a speaking tour to churches, but could not fly back to Erbil because the airport was suddenly closed.  However, they were able to fly into Baghdad and were safely driven past all military check points back to Erbil. I am also in constant contact with the ministry in Dohuk Province.

We are moving forward with the transfer of funds and the purchase of supplies.  The program may be somewhat costlier than anticipated, but we will not back away from providing a real, Christ-centered Christmas celebration to the beleaguered children. 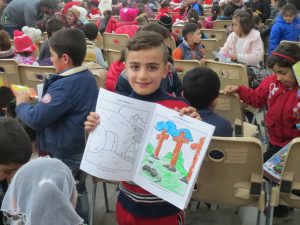 It is critical that we not only meet the challenge of $55,622 but surpass it.

Please continue to pray for the safety of our brothers and sisters in Christ in Iraq. Please pray for a hedge of protection around those faithful who have remained in Iraq. 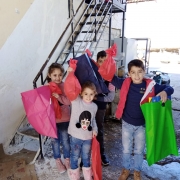 A Look into Christmas for Refugees in Lebanon

Christmas for Refugees in Syria!
0 replies