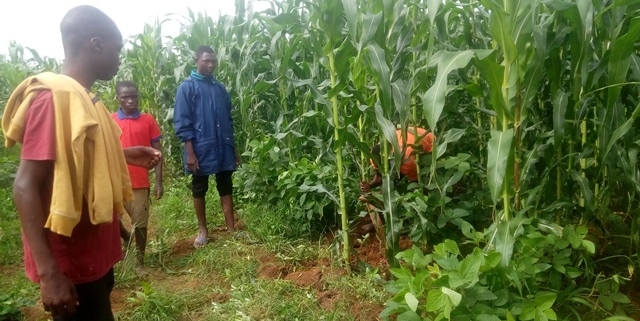 In this issue of the newsletter
New: Religious Freedom Coalition continues to function during crisis
New: Advocacy in Washington: Fighting for the Christians of Nigeria
Update: More Christians killed in Nigeria as we work to start up orphanage farm
Update: News from our ministry partners who are facing the Coronavirus

The Coronavirus and the Religious Freedom Coalition

Major changes at our office: I ordered some major changes in how the Religious Freedom Coalition carries on day to day office duties, beginning Monday, March 16th and well before a state of emergency was declared in Washington, DC and Virginia.

To safeguard the staff, our office hours have been staggered in such a way that no two people are in the office at the same time unless they are related. When my wife Nancy and I are in the office, there are no other staff present. But we still all meet daily!

Each day at 11:00 AM we hold a video conference call using Zoom. The Zoom system is dynamic and allows the staff to really interact and discuss the issues of the day regardless of being in the office or at home.

We end each video meeting by praying for our ministry partners and those who are suffering physically and economically from the coronavirus.

Capitol Hill: All of our legislative affairs conferences and individual meetings in Washington, DC came to an abrupt end in March. Meetings I normally attend, such as the International Religious Freedom Roundtable chaired by Ambassador Sam Brownback, were shut down by early March.

Conferences set up by NGO’s related to religious freedom have all been canceled as well.

Although many federal agencies have their personnel working from home President Trump did not order an official closure in March. Congressmen and Senators are required to fly vote inside the chambers and there was no “social distancing” for congressmen.

Advocacy in Washington, DC: Even with the closures though, our legislative work continues. Because of the overwhelming interest in our Nigeria missions and concern for the welfare of persecuted Christians in Nigeria, I began a post card campaign to President Trump.

President Trump has already taken some actions to send a message to Nigeria! Last year he added Nigeria to a travel ban because of ongoing terrorism there. Also, the State Department added Nigeria to a “watch list” for “severe violations of religious freedom.”

I mailed more than 50,000 letters explaining that the Sunni Muslim President Buhari of Nigeria was allowing the continued persecution of Christians there.

The letters contained a personalized post card to mail directly to President Trump asking him to put sanctions on Nigeria to stop oil shipments.

Under what I propose to President Trump, Nigeria would be blocked from selling oil until the Sunni Muslim president takes actions to stop the slaughter of Christians.

Now is the perfect time for President Trump to act because oil is down to almost $20 a barrel, thanks to the Saudis stabbing us in the back and increasing production as COVID-19 hit.

Saudi “Crown Prince” Mohammed Bin Salman knew well that American shale oil companies need $60 a barrel to break even, and he deliberately set out to put the American suppliers out of business. So far 150,000 American oil workers have been laid off because of the “Crown Prince’s” actions.

Taking Nigerian oil off the market will increase the price and help our laid off oil workers get back to work — and it would teach the “Crown Prince” of Saudi Arabia that we can deal with him in ways he never imagined.

On the Ground in Nigeria: My mission trip to Nigeria the last week of March had to be cancelled because of Covid-19 and the travel bans issued by President Trump. Since the flights were canceled by the airlines, no money from the ministry was lost. The airlines issued a credit for 100% of the money for future flights.

At about the time I was scheduled to arrive in Benue State, Sunni Muslim Fulani Herdsmen attacked a village in Guma, just to the northeast of the capital of Makurdi. The men were farming, so only women and young girls were in the village. One woman was killed and three young unmarried girls were kidnapped to take for forced Muslim marriages. That was on the 23rd of March.

A week before, in the same area of Guma, a funeral was attacked and seven Christian men were killed. At this funeral, the Sunni Muslim herdsmen also stole all the money of the women and took their cell phones. In much of Nigeria, the only phones that work are cell phones, and this allowed the attackers to get away.

During March, in the name of Sharia there were 92 Islamic attacks in 19 countries, in which 526 people were killed and 562 injured. In Nigeria it is mostly Christian villages that are attacked, but some non-compliant Muslims are killed as well.

The Nigerian orphanage farm: The leaders of the orphanage we support in Plateau State have asked us to support farming efforts by the children again this year.

In 2019 the farm we began was a great success story, supplying fresh food for the orphanage at a value that was many times the cost of seed and fertilizers.

The food produced was important, but it also taught the children of the orphanage how to provide for themselves, not just wait for charity from others.

Their plight is heartbreaking. These children have lost one or both parents when their villages were attacked by either the Boko Haram or the Fulani Herdsmen. Some of the children watched as their parents were slaughtered, often with machetes. Even some of the children themselves have scars from being struck by machetes or shot and left for dead.

I have been to the orphanage and I have seen the injuries of the children. I love these kids and would have been back there last month to hold them and pray with them once more … but my wife and I were stopped by the travel ban.

The children and a few adult volunteers cleared the land by hand, planted by hand and harvested by hand. No tractor or harvesting equipment was used. We may have supplied the money, but the kids worked hard to feed themselves.

This year, if the funds are available, we will supply all those needs again but the hand tools will be reused. I am praying that all the funds we need will be available in April.

They learned the reward of labor and to trust God for the outcome.

The Nigerian government has ordered for the closure of schools, no movements, and price of foodstuffs has increased. Life is becoming difficult for people. To avoid the spread of the virus from getting to the orphanage, we provided a means of washing of hands by anyone coming in. The water tower you provided made that possible.

All food for now, except what is stored from the farm you provided last year must come from outside. Our hope now is that the farming project which will sustain the orphanage again this year. We need to get a lot of food to store for we don’t know what might happen next… We trust God for divine provision. (Romans 11:36)

Reports from other ministry partners

In Lebanon, it is a crisis within an already existing crisis; for about a year, our country has been going down a steep hill economically, limiting all imports, including medical supplies.

Unemployment just hit 40%, Lebanese people can’t withdraw money from the banks, can’t pay using credit cards and with the little cash they do have, the choices are very limited as to what they can get from the supermarket.

Many imported items that we used to buy, – and what is local, is now 40 – 50 % more expensive. The struggle is now to survive the pandemic and the debilitating economic crisis that proceeded it in Lebanon and still continue various ministry programs of aiding those in need and taking the Gospel to the lost.

Churches are closed, but there is always a way to reach out to people via social media and WhatsApp. I used to visit Syrian families once per week, this is replaced now by phone calls and encouraging messages. This storm is hard, and we’re all in the same boat, our hope is in the One sleeping in the boat. (Mark 4:38-40)

Jordan was one of the first countries in the Middle East to enforce a full police lock-down because of the Corona virus pandemic. On March 21st the country went on full lock down and traffic was stopped.

The Manara team has been forced to work remotely. This causes challenges but we have accelerated our plans to begin virtual leadership training and youth discipleship programs online. We are also using this time to revamp our social media outreach.

We are moving forward with planning for the opening of our summer youth camp. Programs are being worked out and volunteers are being signed up by phone. Our first dates for Christian youth will be in June unless the horror of COVID-19 and the lock-down continues. Please pray the youth camp open for decades will serve Christians children again this year. We believe that every situation is in God’ foreknowledge and control. (Romans 11:2)

The situation in Iraq has been difficult for our ministry since the First Gulf War (1990 – 1991) and got worse after the Second Gulf War (2003-2011?) because the entire infrastructure of Iraq was destroyed allowing the Islamic State to gain strength.

The Islamic State is pushed back now but much destruction in northern Iraq and the shut down by the coronavirus has limited our ability to assist Christian families to rebuild. We will be unable to deliver diapers for the Diapers for Refugees program in April unless the lock down is eased. We trust in God that all adversities here will be turned to good by Him. (Romans 8:28)

In the next newsletter I will report on the coronavirus situation in Bethlehem and the West Bank. Please pray for all of our ministry partners in the Middle East and Africa.

COVID-19 Impacts on the Religious Freedom Coalition: We are taking steps to limit social interactions in our organization and have come up with a system to keep our office staffed to accept your calls. Ultimately, we find peace in the knowledge that God is in control and continue pushing forward to do the work He has instilled in us to do. Thank you for your continued support, and we continue to pray for your health in this time.

WATCH: William J. Murray Gives an Update on COVID-19 Impacts on Our Organiz...
Scroll to top