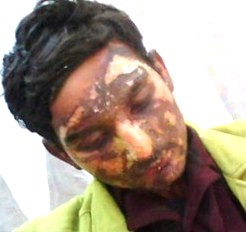 Judicial Watch, a public interest group that investigates and prosecutes government corruption, has filed a petition with the New York Supreme Court to force New York City Mayor Michael Bloomberg’s office to comply with a Freedom of Information Law (FOIL) request regarding contacts between his office, Ground Zero Mosque Imam Feisal Abdul Rauf, and controversial Muslim organizations. The group had also previously requested all records of communication between Mayor Bloomberg and Imam Feisal Abdul Rauf concerning the Cordoba Initiative’s proposed Cordoba House project as well as any contacts with the following organizations:

Mayor Bloomber and buddies on a prayer rug

The original FOIL request to Mayor Bloomberg was made on August 18th of this year, and he had 20 days to comply. What does Mayor Bloomberg have to fear that he will not release the records as required by law? Perhaps the Jewish mayor does not want to explain what he was discussing as he sat on a Muslim prayer rug, in a photo which appeared in the New York Post.

ANOTHER BANK SUES MOSQUE DEVELOPER – Citi Bank has filed a lawsuit against Sharif El-Gamal, the Ground Zero mosque developer who was recently named an NBC “person of the year.” His real estate firm, which is the real owner of the property where the mosque is to be built, was also named in the lawsuit. The bank says that he and his company have failed to pay back $99,489 borrowed on a $100,000 business credit line. This is the second bank this year to file against El-Gamal. As reported earlier, Valley National Bank has filed a suit for more than $95,000, again for failure to repay a $100,000 credit line.

El-Gamal made a statement to the press stating that his refusal to pay legal debts is a “standard business practice” he uses to negotiate better terms, and yes, dishonest men often do use that tactic. Honest men, however, pay their debts.

RAUF DECLARES VICTORY, AS TIME MAGAZINE REWARDS HIM – Slum landlord and Muslim spiritual leader Feisal Rauf recently told the Associated Press that the “tumult” of last summer is over and he is ready to build even more Islamic Centers in the United States to show how peaceful Islam is. His comments came just as a new Pew Poll shows the majority of Muslims support the death penalty for anyone leaving Islam. In the poll by Pew, a majority of Muslims in many of the world’s Islamic countries say they are very much in favor of killing any person who converts from Islam to any other religion.

Meanwhile, Time Magazine listed Imam Feisal Rauf as one of its candidates for “Person of the Year.” In a short bio at Time Magazine it is not mentioned that Rauf is a slum landlord who has had buildings taken over by courts for the protection of the tenants. Time says that all of the opponents of the Ground Zero mosque are from the “right,” which of course, is a flat out lie and disrespectful to the 9/11 families that have protested the Ground Zero mosque, many of whom are union members and card carrying Democrats. It appears that truth does not matter much  at Time any longer.

Updates on the Ground Zero mosque situation can be found at www.no911mosque.org.

THE MESSIAH HAS NO CROWN – Just two years ago the mainstream media celebrated after raising Barack Obama to a godlike image and helping to elect him to the presidency. Whether doctor, preacher or president, no human being can live up to the status of messiah for very long. The same liberal media that raised Obama to divine status has now noticed that his crown is missing and perhaps his robes are not purple enough. Members of Obama’s own party are debating his electability in 2012 and the hard left is delivering him punishing blows over the tax deal he arranged with Republicans. It seems his agreement to allow the tax rates not to rise has turned his purple robe into a red cape in the eyes of many Democrats.

AND MR. PRESIDENT, THE NATIONAL MOTTO IS? – Does the president of the United States know what the national motto is, or is he so centered on his leftist ideology that he does not care what it is? Members of Congress would like to know.

Congressman Randy Forbes (R-VA), and 42 other Members of the Congressional Prayer Caucus, this month sent a letter to President Barack Obama asking him to issue a correction to his speech in Jakarta, Indonesia, in which he incorrectly referred to the national motto as being “E Pluribus Unum.” In the letter Forbes said, “For the President of the United States to incorrectly state something as foundational as our national motto in another country is unacceptable. The President is the primary representative of our nation to the world, and whether mistake or intention, his actions cast aside an integral part of American society.”

VIRGINIA ONE, OBAMA ZERO – The Commonwealth of Virginia has defeated Obama Care in a Federal Court. State Attorney General Kenneth T. Cuccinelli proved his case that forcing Virginians to purchase a product against their will was unconstitutional.

A similar case with additional constitutional questions brought by twenty other states attorneys general is now being held before a federal court in Florida. Without mandated insurance coverage the entire Obama Care system fails.

CONGRESSIONAL LIBERALS GO DOWN IN FLAMES – Senator Reid and President Obama had a secret plan to increase spending despite an agreement with Republican leaders. At the last minute before the government had to shut down, an Omnibus Bill was to be passed instead of normal budget bills. This Omnibus Bill was to fund the government for all of 2011, thereby tying the hands of reformers just elected in November. The bill added hundreds of billions of dollars to the existing debt.

The Omnibus Bill contained outrageous spending including the formation and funding of foundations in the name of liberal politicians such as deceased Congressman John Murtha and Senator Edward Kennedy. Even pork earmarks for Republicans were added to the huge 2,000 page bill that lawmakers were asked to vote for within 24 hours of it being presented to them by Senate Majority Leader Harry Reid.

Under the Reid-Obama plan Republicans would accept the pork and fold, and the spending could be bragged about by Senator Reid and President Obama and victory would be theirs. EXCEPT: Under pressure from voters, Republicans did not fold and refused to vote for the billions of dollars in pork added by Senator Reid. This may be a watershed event in the Congress that could lead to reduced spending. We can only hope.

CUTTING SPENDING IS THE ONLY HOPE – My job as chairman of the Religious Freedom Coalition takes me to Capitol Hill almost daily where I am exposed to both heroes and scoundrels, crucial legislation and minutia. I have a simple observation; our government cannot continue to borrow 40 cents of every dollar it spends without going broke sooner rather than later. The spending is so out of control that no amount of additional taxes can balance the budget. There is only one answer; spending must be cut. Americans agree with me, as long as it is not their benefits that are cut. That has to end. We are all going to have to give up something to save the nation.

HELP IS ON THE WAY – In January dozens of new faces will come to Capitol Hill,  and most of them are real conservatives. Among them are men such as Col. Allen West, whom I supported for two runs for the House. Two years ago he lost, but this time he won. The incumbent he ran against criticized him for his statements on Islam. I applaud Col. West for telling the truth about Islam, a truth he is bringing to Washington, DC. Viewing his one minute clip on Islam is a must for all Christians and can be seen at youtube.com/watch?v=qYbaln3Uqfc.

JUSTICE DEPT. SUES SCHOOL: GIVE MUSLIMS SPECIAL RIGHTS – The Justice Department sued a Chicago-area school district because it would not give a Muslim teacher three weeks off to go on a religious pilgrimage to Mecca in 2008. (NOTE: The teacher was hired in 2007.) Safoorah Khan’s request for three weeks off during the school year to make the hajj was “not related to her professional duties,” and as a result should have been allowed says the Justice Department.

Would Barack Obama’s Justice Department have filed the same lawsuit on behalf of a Christian desiring a pilgrimage to the Garden Tomb? Of course not. PAKISTANI PASTOR SET ON FIRE – Each year the United States gives billions of dollars to Pakistan. Has this money caused positive change in Pakistan? On November 22nd Pastor Wilson Augustine was attacked by six Muslims who accused him of evangelism. After beating him and dragging him in the street they poured fuel on him and set him on fire leaving him for dead. It was a miracle that he was found by Christians and taken to a hospital. A month later he is still recovering. A police report was filed, but the the leader of the gang is the son of a wealthy Muslim land owner and as a result no action was taken.

USCIRF: PROTECT IRAQI CHRISTIANS – Just prior to the December 15th meeting of the UN Security Council on Iraq, the U.S. Commission on International Religious Freedom (USCIRF) urged the U.S. government to address the grave situation facing Iraqi Christians. In a clear appeal the USCIRF requested the UN and the Iraqi government to “provide protection.” The USCRIF news release noted that “The smallest Iraqi religious groups-including ChaldoAssyrian, Syriac, and other Christians; Sabean Mandaeans; and Yazidis-face targeted violence, including murders and attacks on their places of worship and religious leaders, intimidation, and forced displacement; they also experience discrimination, marginalization, and neglect. As a result, these ancient communities’ very existence in the country is now threatened.”

SUICIDE BOMBING IN SWEDEN – Sweden has long swung open its doors to Muslim immigrants, and accepted more Iraqi refugees after Saddam Hussein’s fall than any other Western nation. A full 5% of Sweden’s population is now Muslim. What was Sweden’s reward? An Islamic suicide bomber struck in the heart of Stockholm injuring several but fortunately killing only himself. The bomber’s main complaint seemed to be a Swedish cartoonist putting the head of Mohammad on a dog. Reality: The Muslim population in Sweden has reached the point that violence can now be used to intimidate as is frequently done in the United Kingdom. Food and other aid arrives for Iraqi Christians

OUR MISSION TO IRAQI CHRISTIANS – This month a well known United Kingdom aid group supplied more than $500,000 of food and other goods to our partner ministry in Jordan to assist Iraqi refugees. The Religious Freedom Coalition paid for customs clearances, transport from the port of Aqaba to Amman and for distribution.  Many supporters of the Religious Freedom Coalition assisted in supporting this effort with their generous gifts. Although it was just one 40 ft shipping container, the contents will bless many Christian families.

At right is a photo of the container as it was opened at our partner warehouse in Amman, Jordan. Distribution is underway  both in Jordan and in Iraq. A truck of supplies has already cleared into Iraq and all food and other supplies in the 40 foot container will be distributed prior to Christmas day. 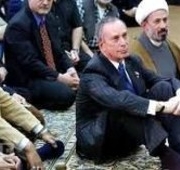