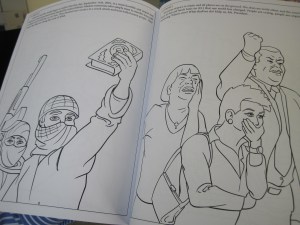 The Constitution or Sharia: Preserving Freedom Conference will be the first national conference on sharia and the Islamization of America, and will be held in Nashville on November 11, 2011. Topics will include: Sharia and Jihad; The European Experience; The Dehumanization and Diminishment of Women in the West under Sharia; The Muslim Brotherhood in America; Sharia and Legal Action, Grassroots Organizing against Sharia and Rabats (including Mega-Mosques); Defending Liberty In Legislatures; and Fighting Islamist Propaganda in the Media
PRESIDENCY

THE ADMINISTRATION TAKES ON “ISLAMOPHOBIA” – An unprecedented collaboration between the Obama administration and the Organization of Islamic Cooperation (OIC, formerly called the Organization of the Islamic Conference) to combat “Islamophobia” may soon result in the delegitimization of freedom of expression as a human right. Read the rest.

OBAMA’S BLIND SPOT – When Libya’s Moammar Gadhafi tried to put down an uprising of Muslim extremists, President Barack Obama rushed in to bomb the presidential palace in Tripoli. In Egypt, the Obama Administration made it clear to President Mubarak that he must leave power or see the wrath of the United States after he ordered the killing of some Muslim Brotherhood demonstrators. Yet, every single day, Christians are arrested, tortured and killed by Muslim extremist governments and Obama says nothing. Currently the Administration is working to overthrow the last secular nation in the Middle East — Syria, the only nation in which Christians can still safely live. President Obama continues to ignore the real story in Iran, which is not the nukes, but the persecution of Christians. Read the rest
JOBS, JOBS, JOBS FOR SAUDI ARABIA- The very day President Obama announced he would speak to the nation on job creation, his Administration announced regulations that would kill jobs and increase dependence on Islamic nations for energy. As a result of the regulations coal mines will close, older oil refineries will close, and an additional $7 billion a year will be spent by businesses on more regulation. Corporations must recover the money someplace, and that means fewer jobs, Meanwhile the Administration has shut down “until further notice” the North Anna Nuclear Power Plant in Virginia, whichwas not damaged during the earthquake in August. It will probably never reopen, causing even more oil to be imported.
THE CONGRESS
SENATOR LIEBERMAN: OBAMA TOO CONCERNED WITH OFFENDING MUSLIMS – “The administration still refuses to call our enemy in this war by its proper name: violent Islamist extremism,” Lieberman said, speaking at a National Press Club event hosted by the National Consortium for the Study of Terrorism and Responses to Terrorism (START). “To call our enemy ‘violent extremism’ is so general and vague that it ultimately has no meaning. The other term used sometimes is Al Qaeda and its allies. Now that’s better but it is still too narrow and focuses us on groups as opposed to what I would call an ideology, which is what we’re really fighting.” Read the rest
IN RECESS – The House and Senate are in recess until September 6th at 10:00 AM

RELIGION AND CULTURE
CLAYTON, MO (KMOX) – Taking heat from Muslim groups upset with a coloring book about the 9/11 attacks, a publisher says he’s been in contact with local police and the FBI. Wayne Bell, the publisher of Really Big Coloring Books, Inc., says there’s been a negative backlash against the book “We Shall Never Forget 9/11: The Kids’ Book of Freedom.” “These are people from Al-Jazeera that have called in here numerous times, people from Iranian TV, people from Palestinian Hamas TV,” Bell said, “A lot of people from the Islamic community have called in here and said increasingly negative things prior to the book being made and then after we made the book too, about the book itself.” Read the rest
GAFFNEY WARNS ON MUSLIM BROTHERHOOD – Former Undersecretary of Defense, Frank Gaffney said, “In recent weeks, we have been put on notice repeatedly: Absent a fundamental course correction, America will go the way of Europe and others before it, succumbing to an insidious totalitarian doctrine known as Shariah whose purpose, in the words of its prime practitioners – the Muslim Brotherhood – is to “destroy Western civilization from within.” Read more Frank Gaffney will speak at the Preserving Freedom Conference on 11/11/11.
NLRB: CHURCH SCHOOL NOT RELIGIOUS ENOUGH – St. Xavier University was founded in 1846, and is the oldest Catholic school in Illinois. Its corporate member is a Catholic body with the “powers for the governance of” St. Xavier, that “links the University to the [Catholic] Church and makes it an officially recognized member of the Church.” St. Xavier’s Board of Trustees must have at least four nuns from the order that founded the school, and, according to its bylaws, its governing body must “ensure [St. Xavier] continues its educational and religious mission.” After quoting these sources and many others, the NLRB’s regional director concluded in true Orwellian fashion that “the evidence establishes” that St. Xavier is “a secular educational institution or university.” Read the rest
NEW: Chairman’s Report from Washington, DC for September 1, 2011.
INTERNATIONAL

FINAL RAMADAN BODY COUNT – As of the 26th day of Ramadan, there have been 180 Islamic terror attacks, with a total of 785 killed and hundreds more wounded. TheReligionofPeace.com keeps a daily body count of victims each year during Ramadan. Islamic assassinations, mass murders and riots often peak during the “holy” month of Ramadan as imams poison the minds of men virtually every day rather than just on Fridays. The site has links to stories from all over the world, about Islamic terror attacks that are not reported in the United States.
CHRISTIAN CONVERTS FLEE ASYLUM CENTER – At the center for asylum seekers in Jaern, Norway, where a Christian convert last week was attacked with boiling water, four other Christians have fled the center because of threats. Muslims at the asylum center told Christians, “This is Jihad, holy war, and we are waiting for at fatwa (license to kill) from the local imam at the mosque in Sandnes.” One young man going by the name of “Arsland” told the newspaper Dagen, “I had to escape and flee the asylum reception center in fear for my life. “Arsland” is from Afghanistan and had converted to Christianity. Read more
CHRISTIAN INTERNET STORE
VISIT OUR INTERNET STORE – Our Internet store has more than books and CD’s. There is everything from candy to jewelry and all of it has a Christian theme. Unlike Amazon and other major Internet stores, we do not sell porn and satanic materials right beside Christian books. Ours is a real Christian store with tens of thousands of items. Please take a look. The store is located at www.rfcstore.com