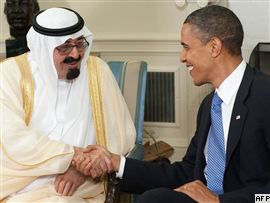 FRIEND OF SHARIAH – “Mr. Obama is pursuing policies favored by those who adhere to the repressive, supremacist and virulently anti-American Islamic political-military-legal program its adherents call shariah,” according to security expert Frank Gaffney. In a recent article on the Egyptian crisis Gaffney went on to explain, “In Iran, shariah is already the law of the land, ruthlessly enforced by the Shiite theocrats of Tehran. In Egypt, the Mubarak regime’s failure faithfully to enforce shariah is one of the principal impetuses behind the Iranian mullahs’ Sunni wannabe counterparts, the Muslim Brotherhood (MB or, in Arabic, Ikhwan).” That is just part of the indictment of President Barack Obama by former Undersecretary of Defense Frank Gaffney. In his latest article Gaffney details how Obama is supporting the advancement of the radical Islamic agenda either by ignorance or deliberate intent. Read more
IS EGYPT THE NEW IRAN – President Jimmy Carter declared that he had helped bring democracy to Iran in 1979. Within a few months the notion of democracy was replaced by a Islamic theocracy. President Barack Obama. much to the displeasure of Saudi Arabian royalty, has now “helped” bring about democracy in Egypt. My take: Within one year any concept of democracy will be gone, replaced by either an Iranian type theocracy of a military government.

THE CONGRESS
DEFUNDING PLANNED PARENTHOOD – Republicans in the House are finally going to try to stop tax funding for the largest abortion mill operator, Planned Parenthood. For decades the federal government has handed Planned Parenthood millions of tax dollars despite the fact that the majority of Americans are pro-life. The move is backed up by new videos of Planned Parenthood “counselors.” who are actually commissioned salespeople, telling pimps how to get abortions for underage “sex workers.” Videos and more information is available at www.exposeplannedparenthood.com
DON’T LET FCC KILL FREE SPEECH – U.S. Congressman Mike Pence (R-IN) and U.S. Congressman Greg Walden (R-OR) introduced the Broadcaster Freedom Act to prevent the Federal Communications Commission (FCC) from reinstating the Fairness Doctrine, which would suppress free speech by requiring the government to monitor political views and decide what constitute fair political discourse. “The American people cherish freedom, especially freedom of speech and of the press. Bringing back the Fairness Doctrine would amount to government control over political views expressed on the public airways,” said Pence, a former broadcaster. “We must pass the Broadcaster Freedom Act and bury the Fairness Doctrine once and for all.”
RELIGION AND CULTURE

“WHITE MALE” THREATENS TO BOMB MOSQUE – just a few days ago the liberal media ran the story of a “white male Vietnam veteran” who attempted to bomb a mosque in Detroit. The Islamic organization CAIR immediately issued a press release stating this proved “Islamaphobia.” OOPS … the man, Roger Dale Stockham, converted to Islam in an Indonesian prison and speaks fluent Arabic. He threatened to bomb the mosque because it was Shiite. Previously he had been arrested for threatening the life of President George W. Bush while he was in office. As soon as it became apparent that Stockham was a Muslim, the mainstream media dropped the story.
SOCIAL CONSERVATIVES AND CPAC – In a full-page ad in the February 7 edition of The Washington Times, a group of conservative leaders, including William J Murray of the Religious Freedom Coalition, said they are deeply troubled by the direction of the Conservative Political Action Conference (CPAC) – which opened on February 10. Click here to see the ad as it appeared in the Washington Times” (including a list of signers). Prominent conservative groups boycotting CPAC include the American Family Association, Liberty Counsel, Family Research Council, the Heritage Foundation, Religious Freedom Coalition as well as such leaders as Gov. Mike Huckabee, Sen. Jim DeMint and Sean Hannity.
NO 911 MOSQUE!
LIBERAL MEDIA HAVING SECOND THOUGHTS – The current edition of The Villager, a very liberal, pro-gay, pro-Obama, pro-anything-but-America weekly in New York City seems to be having second thoughts about the Cordoba House or Park 51 or P51 or whatever it is being called now. Most Americans (but not the Villager) call the project the Ground Zero mosque because it is being built on the human remains of the victims of 9-11. In an editorial this week the Villager looks at the project differently than when it was announced:

“Nine months later, that original presentation seems like a mischaracterization, at best. At worst, it seems like nothing more than the jump-off point for a public-relations spin campaign. The message we applauded and the project this community center has become are now murky and muddled.” (Complete editorial)

Suddenly left leaning journalists are coming to realize that Sharif el-Gamal, the for-profit developer with the credit problems, and party animal Imam Feisal Rauf are not exactly cut from the same cloth. Those of us who understand Islam at its core knew that the project was “murky and muddled” from the beginning because we are familiar with taqiyya. Taqiyya is the allowance in Islam for Muslims to lie to non-Muslims for the purpose of advancing Islam.

INDONESIAN MOBS DESTROY CHURCHES – How often do we hear in the media about the “moderate” Muslims of Indonesia? Well, those moderate Muslims attacked Christians and destroyed several churches because a Christian accused of “blasphemy” was sentenced to only five years in jail. The crowd first attacked the Catholic Church of Saints Peter and Paul and wounded the priest. Father Saldanha was beaten by the mob, which then attacked and set fire to two Protestant churches, Bethel Church and Pantekosta Church, before terrorizing a Catholic orphanage and a hospital run by the Sisters of Providence. Read more
FREEDOM ON TRIAL IN EUROPE – Geert Wilders, the leader of the third largest political party in the Netherlands, is on trial once again for “hate speech.” He is just one of many leaders in Europe facing jail for telling the truth about Islam. Sometimes they are being tried in court for simply quoting the Qur’an. “The lights are going out all over Europe, and it’s because of Islam,” Wilders told a packed courtroom at the beginning of his retrial, “There are no Islamic Mozarts or Bill Gates because they can’t exist where there is no creative freedom. An ideology that comes from the desert can only create a desert.”