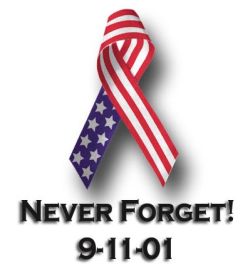 REMEMBERING 9-11 – I was literally passing the Pentagon when American Airlines 77 struck the building. One year after the 9-11 jihad attack I wrote an essay on what I recalled from that day, including the insane pro-Islamic PC from the White House and my efforts to stop it. Each year I republish the essay, Remembering 911. This year an old video was found of a speech I delivered just at the first anniversary of the attack. That video is now at YouTubeIN THIS ISSUE: Special 9-11 update / Remembering the jihad attack / The threat today / The rally at Ground Zero / Congress finds new 9-11 link / More Islamist attacks around the world / More Christians killed in Nigeria / Christian village in Egypt under attack
PRESIDENCY
THE PRESIDENT ON 9-11 – President Obama will attend a service Sunday morning with a Catholic priest, a rabbi and an imam. No evangelical pastors will be permitted to participate. The event has been moved from the National Cathedral because a series of acts of God, an earthquake and floods, have rendered the main sanctuary unusable. The service will now be held at the Kennedy Center and the imam will, of course, pray in Arabic.
THE PRESIDENT IN NEW YORK – President Obama will fly to New York to speak at an event only for “family members” of those killed on 9-11. First responders and those injured that day are not welcome. The restrictions are not new. Ten years ago officials in New York made the decision to make sure that events commemorating the “terrorist attack” would diminish over the years as family members aged.
THE CONGRESS
PETER KING FINDS NEW 9-11 LINK – Congressman Peter King (R-NY), in a letter to Attorney General Eric Holder, said investigators believe it is no coincidence that Anwar al-Awlaki had contact with three of the five hijackers who flew a plane into the Pentagon on September 11th, 2001. The House Homeland Security Committee is investigating to determine “to what extent Anwar al-Awlaki wittingly or unwittingly facilitated the plot of the 9/11 hijackers.” After the attacks, Al-Awlaki was invited to speak at a Pentagon lunch and was also invited by Muslim Congressman Keith Ellison to speak on Capitol Hill. Al-Awlaki also encouraged the attack by Nidal Hasan at Fort Hood. Read more
RELIGION AND CULTURE
RALLY AT GROUND ZERO – This Sunday at 3:00 a massive rally will be held honoring the fallen of the 9-11 jihad attack — a rally that tells the truth about Islamic oppression. This is not the “official” Mayor Bloomberg or Obama political rally. If you are anywhere near New York, please meet me there.Read more
The Constitution or Sharia: Preserving Freedom Conference will be the first national conference on sharia and the Islamization of America, and will be held in Nashville on November 11, 2011. Topics will include: Sharia and Jihad; The European Experience; The Dehumanization and Diminishment of Women in the West under Sharia; The Muslim Brotherhood in America; Sharia and Legal Action, Grassroots Organizing against Sharia and Rabats (including Mega-Mosques); Defending Liberty In Legislatures; and Fighting Islamist Propaganda in the Media
NEW CHAIRMAN’S REPORT BY WILLIAM J MURRAY
Chairman’s Report from Washington, DC for September 1, 2011. IN THIS ISSUE: President Obama’s way of dealing with high unemployment — more high dollar vacations / Why does the First Lady need a separate jet to travel with the President? / Busting the Bible Belt with Somali Muslims / Does TSA hire extremists? / Allen West in Israel / More fraud associated with Ground Zero mosque / Islamic hate speech in Harlem / The London riots caused by lack of morals / Israel under attack / The Ramadan body count: 180 terror attacks kill 785
INTERNATIONAL
SEPTEMBER JIHAD ATTACKS – As of noon today (9/9/11) there have been twenty (20) Islamic terror attacks on innocent civilians in September. On the 7th a suicide bomber killed 13 and wounded 89 in front of a court house in New Delhi, India. Early today a father and his seven young children were hacked to death when Muslims attacked their home in Barkin Ladi, Nigeria. Christians and Hindus are not the only victims. Several attacks have killed Buddhists in Thailand so far this month.
TERROR NOT THE FULL STORY – Although thousands of innocent people are killed in Islamic terror attacks, many more die at the hands of Islamic sharia law. In Iran this past week three men were publicly hanged for homosexuality, as it is forbidden by sharia. In Islamic controlled northern Nigeria, two men had their hands cut off at their wrists for stealing a bull. Many women were murdered by their Muslim fathers this week for family “honor.” A woman in Jordan was shot dead by her father in the hospital shortly after she gave birth to twins. Her crime was not being married.
MORE “ARAB SPRING” FOR 9-11 – Christians in the Upper Egyptian village of Elmarinab in Edfu, Aswan province, have been forbidden to leave their homes or buy food until they remove the dome of St. George’s Church, which was rebuilt in its previous location. Village Muslims, backed by Muslim Salafists from neighboring villages, have threatened to demolish the church today (September 9th) after their Friday prayers and use it as a mosque. Read more
CHRISTIAN INTERNET STORE
VISIT OUR INTERNET STORE – Our Internet store has more than books and CD’s. There is everything from candy to jewelry and all of it has a Christian theme. Unlike Amazon and other major Internet stores, we do not sell porn and satanic materials right beside Christian books. Ours is a real Christian store with tens of thousands of items. Please take a look. The store is located at www.rfcstore.com
https://religiousfreedomcoalition.org/wp-content/uploads/2011/09/911Ribbon.jpg 274 250 Air Spark https://religiousfreedomcoalition.org/wp-content/uploads/2020/03/RFCFinal.jpg Air Spark2011-09-09 17:15:102011-09-09 17:15:10Report From Washington - September 9, 2011