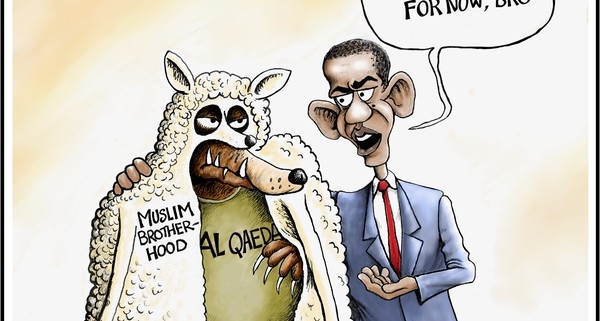 In this Issue: Barack Obama and John McCain created an Egypt that calls for the destruction of Israel / In Oklahoma, Obama is pro-oil? / Congressional Prayer Caucus fights to save Mt. Soledad Cross / Several cities change official seals to say: In God We Trust / Christian neighborhoods in Syria bombed by “rebels” / USCRIF reports on nations that repress religious freedom / Sorry New York Times, the shooter was a Muslim, not a Nazi / Jew hating candidate for mayor of London has sweet words for Mohammed OBAMA’S EGYPT – The “democratic” Eqypt President Obama and his ally Senator John McCain fought for has a new “democratic” parliament. One of its first acts was to declare Israel an enemy, call for a complete boycott of that nation while supporting the terrorists operations of the Palestinian “resistance.” This is just one section from the resolution passed by the new Egyptian parliament: “Post-revolutionary Egypt will never be a friend, partner or ally of the Zionist entity, which we see as the foremost enemy of Egypt and the Arab nation. Egypt will treat this entity as an enemy, and the Egyptian government should reconsider its entire relationship and agreements with this enemy and the threat it poses to the security and national interests of Egypt.” Obama and McCain have created a situation that will lead to a new Middle East war on a grander scale than ever before.
OBAMA IS PRO-OIL? – While campaigning for re-election in Oklahoma, President Obama posed in front of lengths oil pipeline and declared that he was gong to rush through the portion of the Keystone oil pipeline in Oklahoma that he had already rejected as a national project. He then took credit for more oil production in Oklahoma. Republicans promptly pointed out that this is a local pipeline that Obama has no authority over and it was being built anyway, without his OK, and that the increased production in Oklahoma is on private lands because Obama has stopped permits on public lands. Meanwhile Obama is calling on Saudi Arabia to produce more oil so our nation can send the Islamic madmen who rule that nation more money to repress women and deny human rights.
CONGRESS
CONGRESSIONAL PRAYER CAUCUS DEFENDS CROSS – Members of the Congressional Prayer Caucus joined the American Center for Law and Justice in submitting an amicus curiae brief to the Supreme Court, defending the presence of a cross at the Mt. Soledad Veterans Memorial in San Diego, California. The brief urges the Supreme Court to take up the case and reverse a decision by the Ninth Circuit Court of Appeals that held the cross’s presence at the memorial is unconstitutional. Read more
RELIGION AND CULTURE
CITY SEAL – IN GOD WE TRUST – The cities of Chandler, Texas and Ontario, California have something in common. Both have added the words “In God We Trust” to their city seals. Other towns and cities are following suit as the ACLU has forced them to stop praying at meetings and courts have stripped their Bibles away from their kids at school. Since “In God We Trust” is the official motto of the United States the ACLU cannot stop any city, county or state from adding it to official seals which then appear on all documents.
INTERNATIONAL
MORE BOMBINGS AGAINST SYRIAN CHRISTIANS – Whenever you read about bombings in residential neighborhoods in Aleppo, Hamah, or Latakia, Syria, the victims are probably Christians. This week Christian upscale neighborhoods in Aleppo were bombed by the “rebels” supported by President Barack Obama and Senator John McCain. The major rebel city, Homs, is a stronghold for radical Islamists who want all Christians and Jews cleansed from the Middle East. It is no surprise that the EU and the USA support the ‘rebels” who will bring the same kind of democracy to Syria as was brought to Libya: Sharia law.
USCIRF RELIGIOUS FREEDOM REPORT FOR 2012 – The U.S. Commission on International Religious Freedom (USCIRF), has released its 2012 Annual Report and recommended that the Secretary of State name the following nations “countries of particular concern” or CPCs: Burma, China, Egypt, Eritrea, Iraq, Iran, Nigeria, North Korea, Pakistan, Saudi Arabia, Sudan, Tajikistan, Turkey, Turkmenistan, Uzbekistan, and Vietnam.* The vast majority of these nations receive American tax dollars. View full report here.
NEO NAZI ATTACK IN FRANCE – Liberal news outlets in the United States put forward a report that former French soldiers who were neo-Nazi’s had attacked a Jewish school in France killing young children. This was at a time when there was absolutely no evidence this was true. The brutal killer turned out to be a Muslim who had held one seven-year-old girl by the hair while he shot her in the head. The gunman, Mohammed Merah, was so proud of his actions that he had taped a video camera to his own neck, to record the whole event. The continuing story was quickly dropped from the front pages of the New York Times, which now features numerous stories on how “racist” whites are in Florida.
LONDON MAYORAL CANDIDATE LOVES MOHAMMED – London mayoral candidate Ken Livingstone calls Prophet Mohammed’s words an “agenda for all humanity” in a bizarre attempt to buy votes from the Islamic community. Livingstone frequently refers to Jews as Zionists and displays a hatred for Jews. He seeks Muslim votes saying that he does not expect Jews or Zionists to vote for a Labour candidate like him because they all have money. Read more
MORE FROM THE RELIGIOUS FREEDOM COALITION
CONSTITUTION OR SHARIA CONFERENCE DVD – This is the complete set of DVD’s from the November 11, 2011 Constitution or Sharia conference in Nashville

, Tennessee. The Constitution or Sharia: Preserving Freedom Conference, was the first true national conference on Sharia and the Islamization of America sponsored by major freedom oriented organizations! It was not just another educational conference. How do deal with and stop implementation of Sharia law in the United states was outlined by speakers and in panels. Order today
NEW CHAIRMAN’S REPORT – Now available, the Chairman’s Report for March 8th, 2012. IN THIS ISSUE: Obama Apologizes for Qur’an Burning / Don’t Attack Iran? / Obama Targets Tea Party with IRS / Catholic Senators Help Obama Kill Religious Freedom / Resolution on Iranian Death Sentence for Pastor/ U.S. Judge Says Muslim Attack on Atheist OK / Syria: Targeted Killings of Christians.
LEARN MORE ABOUT SHARIA LAW – One of the best locations on the Internet to learn about Islamic Sharia law and its effect on the West is www.shariafreeusa.org FACEBOOK FAN? Sharia Free USA now has a Facebook page with more than 1,500 followers. Join with us at Facebook today!