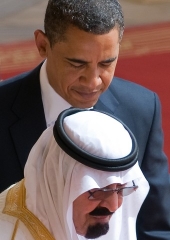 Saudi Arabia’s notorious religious police, known as the mutawa, charged into a private prayer meeting of at least 53 Ethiopian Christian workers in early February and arrested them for praying in a private home.

The arrests were made in the very wealthy Persian Gulf coastal town of Damman. Three of the Christian leaders, all women, were charged with seeking to convert Muslims to Christianity even though no Muslims were present at the prayer meeting.

Arresting Christian guest workers in Saudi Arabia is a common event, and in jail their treatment is usually horrendous, particularly if they are African. For example, during Advent of 2011 there was another arrest of Ethiopian Christians that was brutal. In that case, the mutawa stormed a prayer meeting at a private home in the Red Sea city of Jeddah, arresting 29 women and six men and jailing them for more than seven months. The men were barbarically beaten, and the women were subjected to torture of a sexually intrusive nature.

There was an outcry by some on Capitol Hill, but not from the White House.

Nina Shea, the director of the Washington-based Hudson Institute’s Center for Religious Freedom, told FoxNews.com that the arrests in Dammam are “part of Saudi Arabia’s policy to ban non-Muslim houses of worship and actually hunt down Christians in private homes.”

In a FoxNews.com story run several weeks after the most recent arrest of Christians, Shea said, “The U.S. government does not raise its voice in protest” as part of the U.S.-Saudi strategic partnership. She added the failure to push the Saudis to change their intolerant behavior “has taken the backseat to oil and the war on terror. The Saudis are playing a double game – cooperating with the war on terror and working against the war on terror campaign.”

Nina Shea has been a powerful advocate for religious freedom for many years. She was appointed by President George W. Bush to serve for several years on the United States Commission on International Religious Freedom and is the author of “In the Lion’s Den: A Shocking Account of Persecuted and Martyrdom of Christians Today and How We Should Respond.”

So far only one lawmaker has spoken up about the latest abuse of Christians by the Saudi Arabia monarchy/dictatorship. Rep. Jeff Fortenberry, R-Neb., who sits on the Caucus on Religious Minorities in the Middle East, said, “Nations that wish to be a part of the responsible nations of the world must see the protection of religious freedom and the principles of reason as an essential part of the duty of the state.”

In stark contrast to ignoring the persecution, even torture, of Christians by our Saudi “ally,” the Obama administration and many senators of both parties strongly condemned Russia when an all-female anarchist punk rock band calling themselves Pussy Riot was arrested for demonstrating in a rather foul performance inside Christ the Savior Cathedral in Moscow. (Continued below video)

According to the Obama administration and the mainstream press, Russia should allow this form of “free expression” publicly, on the altar of a sacred church, yet when Saudi Arabia arrests Christians for praying in a private home, it’s not a problem at all. The liberal politicians and liberal press in the United States will stand up to defend the feminist rock band’s defiling of a sacred place, but have no desire to defend Christians who are tortured by the Islamic government of Saudi Arabia.

The Pussy Riot band members were charged with “hooliganism motivated by religious hatred” because of their anti-church, anti-government performance at the altar of Christ the Savior Cathedral, and the leaders were sentenced to two years in jail. In contrast, Christians in Egypt, Pakistan, Iran and Saudi Arabia have been sentenced to life prison terms or even death for “blasphemy,” with no liberal outrage manifested in any Western nation. Indeed, the liberal press often casts the blame on the victims of Islamic violence, as was the case in the attempted assassination this year of Lars Hedegaard the head of the Danish Free Press Society in Europe.

For liberals in the West, there will be a price to pay for their support of Islamic suppression of human rights. As Islam demographically, if not violently, overtakes the West, the radical left will be the first to pay with their heads for their support of drugs, homosexuality, prostitution and promiscuity – that is if God does not render judgment on them first.  – See video version of the article here

See the riveting story of Christians who paid the ultimate price in Islamic Iran: “A Cry From Iran: The Untold Story of Iranian Christian Martyrs.”