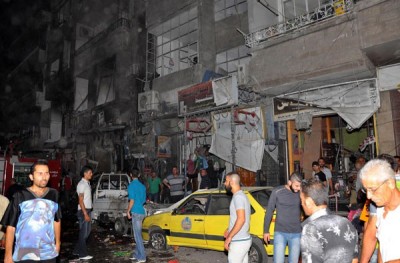 The Jaramana Story – During the Iraq war which officially ended for the United States in 2012, I worked with our Jordanian partners to assist some of the tens of thousands of Christians who were forced to flee. Christians fled Iraq because they were under attack and unarmed. Not too many Americans are aware that because the United States saw Muslim militias, including the Kurds, as useful, Muslims were allowed to keep their weapons. However, when the Iraqi army was disbanded and disarmed, so were all the Christian militias.

The Bush Administration came to the conclusion that allowing Christians to have guns in Iraq would promote the idea that the United States was on a “Christian Crusade.”  In the end, the only unarmed group in Iraq was the Christians. Those Christians who could afford to, fled to other nations to escape the kidnappings, property thefts, rapes and killings.

That feeling of stability and safety began to vanish with the Sunni uprising in Homs Province funded by the Qatar and Saudi governments. There were no “spontaneous” demonstrations for democracy in Syria. The Financial Times reported that Qatar had funded the Syrian rebellion by “as much as $3 billion” over the first two years of the civil war, but in May 2013 reported that Saudi Arabia was becoming a larger provider of arms to the rebels. Qatar at one point was paying a bounty of $50,000 to anyone defecting from the secular government.

Jaramana remained outside of most of the violence until 2012. This city of more than 650,000 is mostly Christian, but other religious minorities such as the Druze, live there as well. There is virtually no native Sunni Muslim presence to cause upheaval.

However, when the Qatar mercenaries, who were paid cash in US dollars, failed to topple Assad in the first twelve months of the uprising, they began to fade away.  They were replaced by Christian-hating jihadists of the al-Qaeda variety, such as the Al-Nusrah Front which is now the dominant “rebel” group.

The first Jaramana car bomb attack I am aware of occurred on August 27, 2012, killing 27 people who were attending a funeral. There were more to come. On October 29th of the same year, 10 were killed in the car bombing of a market area, and on November 28, four explosions (two car bombs and two smaller bombs) killed 47 more.

So far in 2013 the two worst attacks on Jaramana have come in July and August. On July 25, a car bomb attack killed 10 residents. The last attacks came on August 6th with 28 more killed and dozens injured. In the last attack, three children died. There are no military targets in Jaramana, but the jihadist ”rebels” supported by President Obama claim Christians back the Assad government; therefore, killing Christian civilians including children is the will of Allah. Fatwas approve both robbery and rape. No amount of butchery by the “rebels” seems to dissuade Obama from supporting them.

This time the Iraqi Christians who fled Islamic oppression in their home country have no place to escape to. Syria was the last of the Middle East nations with a secular government that was functional. Egypt and Lebanon are no longer stable, and the United States only encourages Muslim immigrants, not Christians from the Middle East. Syrian Christians who have lived in Syria since the time of the great evangelist St. Paul have no place to run, either. Christian enclaves such as Jaramana are where they must stand and fight for survival.

Because the majority religion in Syria is Muslim, the secular government allows the Christian community to operate its own civil court system to deal with family matters, including divorce. This separate system shielded the Christians in areas such as Homs Province where radical Sunni Imams had their mosques. It was in these radical mosques that Qatar and Saudi Arabia found their mercenaries for the original uprising against the secular government three years ago. Khalid Ibn al-Walid Mosque in Homs, the “birthplace” of the revolt against the secular government, was recently recaptured by Syrian troops.

Other Christian areas besides the city of Jaramana are under attack from the al-Qaeda linked “rebels” supported by Qatar, Suadia Arabia, the United States and the European Union. One such area is Latakia, which the media continues to refer to as the place President Assad is from. While the majority in Latakia is Alawite like Assad, a large percentage of the population is Christian, as is most of the ancient center of the city of Aleppo. Officially, not including the hundreds of thousands of Iraqi Christian refugees, there are 2.5 million Christians in Syria.

I have personally appeared on Mike Huckabee’s radio show and a couple of others to discuss the Christians of Jaramana, but by and large the media is not interested in persecuted, raped or murdered Christians if the news offends Muslims in the United States. This attitude can only change if Christians constantly demand answers as to why our government is supporting radical jihadists in Syria, while targeting them with drones in Yemen.  You can see a few of my articles, videos and radio interviews at www.StopKillingSyrianChristians.com.

As chairman of the Religious Freedom Coalition, I am doing whatever I possibly can, both to bring awareness to Capitol Hill of the atrocities against Christians in Syria, and to assist Christian refugees from Syria directly. Currently our office is negotiating to move a large amount of medical supplies to Christian refugees in Jordan. Above all prayer is needed for the protection of the Christians of Syrian. Please add them to your list of those to pray for. Standing with Egypt’s Christians – Congressman Trent Franks (R-AZ) and Congressman Joe Pitts (R-PA) have introduced House Resolution 329 to express support for religious freedom in Egypt – especially for Coptic Christians who are being targeted by Islamists.

The resolution calls for the support of the fundamental rights of all Egyptian citizens, equal access to justice and due process of law. It also calls upon the new government to be transparent and accountable to the people of Egypt.

Coptic Solidarity, a religious freedom group for Egyptian Copts, fully supports this resolution. They note: “The resolution rightly recognizes that far more Egyptians protested to oust Morsi than protested to oust Mubarak. It has a critical focus on supporting democratic institutions, the drafting of a new constitution with broad support from minority groups, transition to an elected government, and respect for human rights and religious freedom.”

The Religious Freedom Coalition is working on Capitol Hill to recruit additional congressmen to co-sponsor the resolution and convince House leadership to allow a vote. We hope to have the resolution passed within two weeks of Congress reconvening in September.

On the home front, threats to religious liberty – Congressman J. Randy Forbes (VA-04), founder and Co-chairman of the Congressional Prayer Caucus, along with Congressman Steve Scalise (LA-01), Chairman of the Republican Study Committee, led 85 members of the House of Representatives in defending legislative prayer before the Supreme Court of the United States.

On August 2nd, 85 members of the House of Representatives filed an amicus curiae brief with the Supreme Court in the case of Town of Greece v. Galloway, supporting the constitutional practice of legislatures opening their sessions with prayer.  The brief points out that, although “Congress opens its daily sessions with legislative prayer, a practice that is fully consistent with the Establishment Clause … Congress’ longstanding prayer practice would fail under the tests promulgated by the Second Circuit in this case, and the Fourth Circuit in previous cases.”

The Second Circuit ruled that, despite a highly inclusive prayer policy, public prayer before town meetings in the town of Greece, New York was unconstitutional.  The court based its decision on perception rather than policy, ignoring the fact that the town’s prayer policy allows any volunteer to provide a prayer before meetings, including individuals of no faith.

The Religious Freedom Coalition stands with and supports congressional efforts such as these to safeguard the rights of Christians in the United States.

The Prentice World History textbook being used by 9th grade students in the Brevard Public Schools in Florida has a 36-page chapter on the glories of Islam, but almost no mention at all of  Christianity or Judaism. The chapter on Islam also refers to Mohammed as the “Messenger of God.” The textbook has been used for the past three years in this Florida school district.

William Saxton, chairman of Citizens for National Security, testified before the school board and warned them that the book rewrites Islamic history and presents an incorrect view of the Muslim faith.

It’s no wonder that the book promotes Islam and ignores Christianity and Judaism. The advisor on religion to the publisher, Prentice Hall, is the Institute on Religious and Civic Values, formerly called The Council on Islamic Education. It is run by Shabbir Mansuri, who also served as academic reviewer on the Brevard County textbook. He immigrated to the United States in 1989 to obtain a degree in Chemical Engineering and immediately set out to change the nation that had invited him in by promoting Islam and denigrating Judaism and Christianity.

Saudi Ad Campaign Continues – The advertising campaign to expose the evils of Saudi Arabia will continue, but on a smaller scale, until the return to Washington of the Congress which is in recess until September 9, 2013. At the beginning, we mainly targeted the congressional districts of Republicans on the Foreign Relations Committee and the Armed Services Committee. In late July we also began to also target Democratic congressmen including some of the more liberal ones. We ran an ad in the district of ultra-liberal Joe Kennedy in Massachusetts.  The ads exposing the brutal treatment of Ethiopian Christian guest workers are targeted to congressmen on the Foreign Relations Committee.

On the Internet please go to www.StopSaudiEvil.org to see the current list of newspaper ads and the videos the Religious Freedom Coalition has produced about Saudi Arabia. If you have a Facebook account, please join us at Facebook.com/ReligiousFreedomCoalition