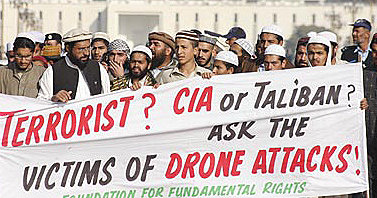 The Imperial presidency is close to crossing the Rubicon President Barack Obama is slowly closing the Guantanamo Bay detention center which once held hundreds of al-Qaeda terrorists because he says it is a “recruiting tool” for groups such as the Islamic State. Yet, Obama does not believe that his “signature” drone strikes, such as the one that killed 12 Yemeni civilians in December, 2013 resulting in the United States paying $1 million in compensation, has any effect on the public image of the United States in the Arab world. But to the contrary evidence points to Obama’s drone war as being a fundamental recruiting tool for al-Qaeda and the Islamic State because of the number of civilians killed.

President Obama has issued many specific “death warrants” ordering the killing of specific individuals including American citizens such as Anwar al-Awlaki and Samir Khan. Al-Awlaki’s teenage son was killed weeks after he was. Although al-Awlaki clearly had terrorist ties, there is something troubling about the president of the United States having a U.S. citizen executed without trial. Those were targeting attacks, but  U.S. citizens, as well as aid workers and innocent hostages have been killed in Obama’s “signature” drone strikes.

Signature strikes differ from targeted strikes in that they are based on profiles of areas or specific buildings where the surrounding activity has a high “likelihood” to be of a terrorist nature. The identity of the individuals or their roles are not known at the time the strike is ordered. Women held as sex slaves by the Islamic State are just as likely to be killed as the fighters themselves. It was this type of signature strike that killed hostages and aid workers in 2015.

An article at FP by Dan De Luce and Paul McLearly stated this about a March, 2016 drone attacks: In March, U.S. drones and other warplanes bombed an al-Shabab training camp in Somalia north of Mogadishu, killing what the Pentagon later estimated were about 150 militants who had gathered for a graduation ceremony. And an air raid a few weeks later on an Islamic State training camp in the mountains of Yemen killed dozens of suspected militants, the Pentagon said. U.S. officials privately acknowledged that they didn’t know the precise identities of who they killed.

In a statement on April 7th President Obama acknowledged civilian drone deaths saying, “There’s no doubt that some innocent people have been killed by drone strikes.” He then went on to excuse the deaths saying, “It is not true that it is this sort of willy-nilly ‘Let’s bomb a village.’ That is not how folks have operated. The rate of civilian casualties in any drone operation [is] far lower than the rate of civilian casualties that occur in conventional war.”  How exactly does he know that?

A major problem that people around the world have with drone warfare is much the same as my objection — it is basically lawless.  It is very concerning that these drone strikes are done in the sovereign territory of nations on which Congress has not declared war, and they are ordered by the President alone, without authority of the Congress. Often Members of Congress learn on the strikes only from media reports.

The ability of President Obama to issue “death warrants” and authorize “signature” drone strikes is a direct result of an imperial presidency growing out of what is becoming a totalitarian democracy like that which I describe in Utopian Road to Hell,  and which Friedrich von Hayek described in his Constitution of Liberty.

Democracy is a process and not a form of government, but sadly this simple fact was ignored by President Obama as it was by President George Bush before him as both attempted to spread “democracy.” But democracy in its pure form is nothing more than mob rule, which is why the Founders of this nation established a Constitutional republic to protect the rights of all citizens regardless of viewpoint.  They did not want a pure democracy, which favors only the majority.

Sadly, elected officials in this media age bow to opinion polls and special interest groups to keep themselves in power, often even ignoring the Constitution. Tax laws and civil laws are crafted to provide for and protect those who keep the elected officials in office, leading to a totalitarian democracy. The Constitution is ignored in favor of the “democratic system” that gives more and more power to central government at a time when individual liberty is becoming even more important to Americans.

Those elected to power often have the ability to create rules to keep themselves in power by manipulating the “democratic process” that got them into power in the first place. Even the rules to get into power may be manipulated, as can been seen by the use of “super delegates” in the Democratic Party presidential nominating process. In Europe, opposition leaders outside the “mainstream” are often simply arrested and charged with “inciting hatred” as was done to Marine Le Pen in France.

We have seen in the last two decades the near total militarization of law enforcement agencies in the United States. Police, not only in large cities but even small sheriff’s departments, now have access to weapons including armored personnel carriers that were designed for the battlefield. Police have the permission of the Supreme Court to shoot an unarmed individual if they “feel threatened” and police are trained on the “21-foot rule” which allows them to use deadly force.

At what point will the “felt threatened” argument be expanded to allow the use of drone strikes within the United States against anyone perceived by a President or other high official to be a potential “threat”? That policy is now in place outside the United States and citizens are not exempt.

In the current 2016 election cycle there are candidates running for office who seek a centrally planned “utopian” like system in the United States where the “needs” of the people are taken care of by the elitist class running the central government.

Senator Bernie Sanders flat out stated that he wants to make the United States more like Denmark, an oil rich nation that has a population half the size of New York City. But the United States does not have the oil wealth to coddle 350 million people. For his plan and those of “it takes a village” Hillary Clinton to work, wealth must be confiscated to provide what elitists deem are the “needs” of the people. Nowhere in the Sanders/Clinton terminology is the concept of the people’s wants or desires.

And how will this redistribution be enforced to provide the needs which the elites decide the people deserve? Will spy drones make sure no one has more than anyone else? At some point do those drones need to be armed to enforce the collectivization of America?

On January 10th 49 BC, the Legio XIII Gemina, led by General Julius Caesar, crossed the Rubicon River from the province of Gaul into Italy proper, an action forbidden by law to any Roman general leading an army. Thus the statement “crossing the Rubicon” is used to describe an action that can never be undone. In the case of Rome, it ended the supremacy of the Senate and ushered in imperial rule.

The use of robotic force, including drones by imperial institutions, even those initially set up by democratically elected leaders, can and will lead to a “crossing of the Rubicon” by some future President.  This “well meaning” President, created by a totalitarian democracy in defiance of the Constitution, will be crowned as what will eventually be an emperor.

It is most likely that the new emperor, or by whatever title he will be called, will promise a utopia providing the “needs” of the people — but the results will be the same as they were in Nazi Germany, Soviet Russia other countries which attempted Utopian governments. William J Murray on ISIS at The Awakening in Orlando on March 5, 2016

Does this sound like an impossible scenario? Compare the unilateral powers used by President Barack Obama versus those of President Thomas Jefferson and for that matter President Theodore Roosevelt. Executive orders carry the weight of law now, and the Congress has given the presidency so much power over the past several decades that it fears attempting to take that power back.

The current central government in Washington, DC controls everything from the sprinkler systems in our backyards, to the education of our children, to the precise religious and moral beliefs we are allowed to express at out places of work. The logical next step is to control how we spend whatever money is not taken from us in unjust taxes. This will be a state in which the government tells us what our needs are and supplies them for us, while we work to support the elites who run the imperial state.

The salvation of the America people from a future centrally planned imperial state can be found only in the federal system established by the Constitution, the system that has been abandoned to central government power in Washington. Principle power must be returned to the States, by force if required, to decentralize and protect the rights of the American people to live in peace within their sphere of liberty, impenetrable by the totalitarian “democracy” taking shape in Washington, DC.