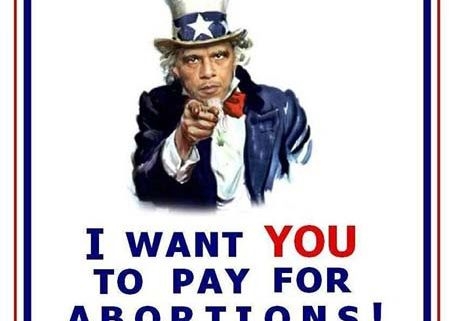 THE PRESIDENCY
OBAMA: GENDER SELECTIVE ABORTIONS OK – Apparently President Barack Obama has never met an abortion he didn’t like. Although virtually every European nation and Canada prohibit abortions done selectively by sex, Obama said he was against any law prohibiting abortions based on the sex of the child. With his support, Democrats defeated a bill in the House that would outlaw abortions for the purpose of sex selection. Undercover videos revealed, and Planned Parenthood confirmed, that it would abort children based on sex except in the four states where doing so is illegal. Read more
“OBAMA, OBAMA, WE ARE ALL OSAMA” – Thousands of Muslims gathered to address “Obama the ape” and chant support for Osama bin Laden. In our politically correct Western society, if an Arab Muslim calls a black man an ape, isn’t it racist? No one in the liberal media, not even MSNBC has any problem with the constant racist comments from Islamic imams. Why is that?

NEW AD POINTS TO MORE OBAMA VIOLATIONS OF RELIGIOUS FREEDOM – The Religious Freedom Coalition has a continuing advertising campaign designed to stop President Barack Obama’s frequent attacks on religious freedom. This past weekend, an ad listing even more of Obama’s egregious insults to religious freedom was placed in the weekly edition of the New York Times which is distributed in Washington, DC and mailed to all 50 states. See ad
CONGRESS
PRENDA VOTE – My good friend Congressman Trent Franks (R-AZ) introduced H.R. 3541, the Prenatal Nondiscrimination Act (PRENDA) after learning that Planned Parenthood would abort babies for the purpose of sex-selection. The bill was considered under suspension, requiring a two-thirds majority to pass. PRENDA failed to reach the two-thirds majority. The final vote of 246 to 168 was because of massive Democrat opposition. A total of 7 Republicans and 161 Democrats did not agree with most Americans, that abortions based on sex-selection are wrong. Read more
RELIGION AND CULTURE
BLACK PASTORS ON SAME SEX MARRIAGE – Shortly after President Obama and the NAACP endorsed same-sex marriage as a civil liberties issue, African-American pastors met in Washington, DC and were interviewed on the issue. The vast majority do not believe marriage rites should be extended to homosexuals and lesbians. Read more
NO SHARIA FOR KANSAS –A bill banning foreign laws, including Sharia Islamic law, from being used in Kansas to determine legal matters was signed by GOP Kansas Governor Sam Brownback recently. Both the Kansas House and Senate had voted overwhelmingly in favor. While opponents say Muslim tenets are unfairly targeted by the legislation, supporters say it is designed to uphold the U.S. Constitution. Read more
NO STRAIGHT SEX FOR CALIFORNIA – The California Senate voted 23-13 in favor of a bill prohibiting counselors and therapists from telling young people it is possible to change same-sex attractions. The bill has sparked outrage from individuals who have overcome unwanted same-sex feelings sparked by childhood sexual abuse. It is also being opposed by Pacific Justice Institute, whose attorneys believe its blanket ban on certain types of counseling is unconstitutional. Read more
MORE FROM THE RELIGIOUS FREEDOM COALITION
ISRAEL FACT FINDING MISSION – A once in a lifetime mission led by William J. Murray, William Federer and Frank Gaffney, all three experts on Israel and Islamic affairs. Not a standard “tour,” the mission includes visits to settlements and military bases plus evening panels. Read more
NEW JUNE CHAIRMAN’S REPORT – Now available, the June 1st, 2012 edition of William J. Murray’s Chairman’s’ Report. IN THIS ISSUE: Updated information on the advertising campaign to expose Barack Obama’s war against religious freedom. Congressman Todd Akin fights to protect the rights of military chaplains. More!
LEARN MORE ABOUT SHARIA LAW – One of the best locations on the Internet to learn about Islamic Sharia law and its effect on the West is www.shariafreeusa.org FACEBOOK FAN? Sharia Free USA now has a Facebook page with more than 1,500 followers. Join with us at Facebook today!
CONSTITUTION OR SHARIA CONFERENCE DVD – This is the complete set of DVD’s from the November 11, 2011 Constitution or Sharia conference in Nashville, Tennessee. The Constitution or Sharia: Preserving Freedom Conference was the first true national conference on Sharia and the Islamization of America sponsored by major freedom oriented organizations! It was not just another educational conference. How do deal with and stop implementation of Sharia law in the United states was outlined by speakers and in panels. Order today
INTERNATIONAL
MORE DEATH THREATS FOR GEERT WILDERS – Police in Amsterdam have arrested the spokesperson of the Islamist group Sharia4Holland on charges of making death threats against the Dutch Freedom Party leader, Geert Wilders. Abu Qasim was arrested after a speech he gave in Amsterdam’s central Dam Square on May 25 (video here), when he warned that Wilders would be “dealt with” once the Netherlands became an Islamic state.
UK PRISON INMATES FORCED TO CONVERT TO ISLAM – Prisoners are under pressure to convert to an Islamic “gang” at a high-security jail, with non-Muslims in fear of violence just for cooking bacon, according to an official report. Muslim prisoners at the top security jail doubled in two years. Muslims represent around a third of all prisoners at Whitemoor Prison in Cambridgeshire. Prison guards said they had a policy of “appeasement” towards the powerful and growing Islamic population, particularly convicted terrorists who were feared to be recruiting future extremists. Read more
SECOND ISLAMIC CONQUEST OF EGYPT – According to the popular Egyptian website, El Bashayer, the Muslim Brotherhood presidential candidate, Muhammad Morsi, has just declared that he will “achieve the Islamic conquest (fath) of Egypt for the second time. Morsi says he will make all Christians convert to Islam, or else pay the jizya,” the traditional Islamic tax or financial tribute required of non-Muslim “dhimmis.” Read more
UNCOVERED WOMEN SPAT UPON – The “democratic” Arab Spring has brought something new to Egypt — spitting on women who are not “covered.” Supported by the United States and Europe, radical Islamists are erasing what few rights women and Christians had in Egypt. Read more