Inside the Church of the Immaculate Conception in Qaraqosh, Iraq, on 30 October 2016. The town of Qaraqosh was freed by NPU (Nineveh Plain Unit) after two years of ISIS occupation. (Photo by Joseph Galanakis/NurPhoto) Posted with permission

Many Christian residents of towns surrounding Mosul that have been liberated from Islamic State’s control have started returning home only to find their homes booby-trapped, in ruins or uninhabitable.

In August of 2014, the Islamic State drove many religious minorities, including Christians and Yazidis from their homes in order to establish their caliphate. Since then, these religious minorities have been subjected to persecution and genocide at the hands of ISIS.

Thus far, the villages of Bashiqa, Bartella, Karamles, Qaraqosh and Tellisqof have been recently liberated from the Islamic State but the Nineveh Plains Units, the Christian militia; and Iraqi Special Forces, but many of the villages were left completely destroyed.

According to FoxNews.com: “In some towns, most of the infrastructure has been reduced to rubble; in others, dangerous chemical compounds have been dumped, polluting the ground. But what all the places have in common is that they are unsafe and nearly impossible for those who fled to return anytime soon.”

One Assyrian from Bashiqa told FoxNews.com, “It’s a catastrophe. We are hearing that the situation at Bashiqa ia terrible… [ISIS] has destroyed it all…. We hope to return with everyone here. God willing, we will return soon.”

An Assyrian from the Village of Karamles said: “Everything is damaged… Houses have been burned by fire. There’s no water, no anything. People will only return if there is some sort of promise of protection.”

Many homes in these villages were either burnt to the ground or looted when Islamic State militants abandoned them. William Murray next to entrance of one of the modified containers used as an office. In some cases these are used as homes for refugees. This is a 20-foot model that is near completion. A 40-foot model is also being prepared.

Robert Nicholson, the executive director of the Philos Project, told FoxNews.com: “The damage to these villages is hard to overstate. In one last act of vengeance, ISIS made sure that returning Assyrian families would find their homes and business shot full of holes, rigged with mines and utterly demolished.”

Nicholson, and many others, believe rebuilding the Nineveh Plain will take years.

The Diapers for Refugees program aims to send 160,000 high quality disposable diapers to these Christian refugee families located in camps around Erbil every three months. Families in these camps are dying from diaper rash because of the inability to wash cloth diapers with soap and clean water. Due to the lack of diapers, mothers are forced to use donated clothing as diapers for their children, which still can’t be cleaned properly.

Christmas for Refugees program helps displaced Christians from Iraq, Jordan and Lebanon that are being ignored by Islamic run charities. In 2013, 2014, Christmas events that included hot meals were served to Christian refugee children in Jordan and Lebanon. In 2015 the program was expanded to Christian IDP’s (Internally Displaced Persons) in Iraq who fled the Islamic State as the city of Mosul and Christians villages nearby were overrun. Much of the Nineveh Plain was also stolen from Christian families who fled to the Kurdish areas in the northeast. In 2016 the number of children served will be increased.

Please pray for the Christmas program this year and the safety of the children. 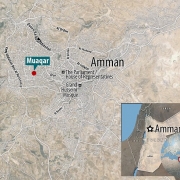