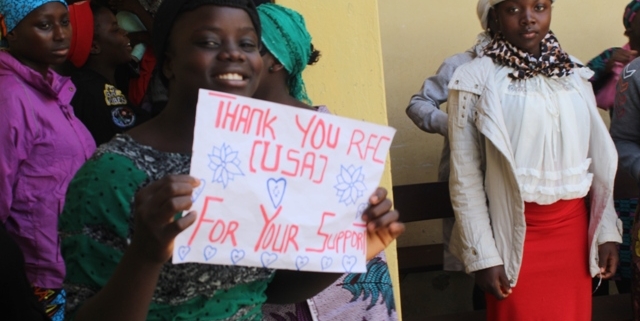 In this issue of the newsletter:
New: Results of 2022 poll of Religious Freedom Coalition supporters
New: Capitol Hill groups demand help to release Christian worker in Niger
Update: More on our visit to the orphanage at Jos and plans for the building
Update: More on visits to locations in Benue State, Nigeria – A school we can’t support

Results of poll of supporters

Led by the Lord: In early February supporters of the Religious Freedom Coalition received a questionnaire asking to rank missions programs by importance. The answers help guide me in what direction to take throughout the year. Sometimes I become so involved in a program that it becomes difficult for me to see the drawbacks.

Does the Lord really want me to continue with everything I am doing in the Middle East and Africa right along with work on Capitol Hill?

Rather than just my judgement I value the direction given by supporters.

The Lord speaks through ministry supporters. It is the Lord who directs the faithful in deciding what ministries to support.

Supporters were asked to rank the main Religious Freedom Coalition programs from one to five with five being the most important to continue or expand.

Many comments on the poll forms indicate rebuilding the orphanage in Jos should be the priority for the ministry in 2022.

The vote totals for the two Nigeria questions were close at first but as more results come in it is becoming very clear that finding a permanent home for Christian orphans and making sure they are well fed has the most support.

Diapers for Refugees and Christmas for Refugees have just about even support so far but comments on the forms returned seem to lean toward the adult diaper programs. Many supporters have written notes hoping that we can expand the adult diaper program. However, many supporters who have backed the Christmas program for the last ten years wrote encouraging notes seeking to return the Christmas program to having large events.

The divide on advocacy support on Capitol Hill may have been influenced by the fact that Speaker Nancy Pelosi is the second most powerful person in Washington after President Joe Biden. Biden and Pelosi spend a lot of their time on issues of race and gender.

In the next newsletter I will give a final report on the poll totals!

Islamists kidnapped Jeffery Woodke on October 14, 2016 in Niger. He is an American humanitarian missionary from California having two decades of experience working in that nation.

Recent information provided to his family and the ransom demand suggests he is still alive and being held in the nation of Mali by Jama’at Nasr al-Islam wal Muslimin (JNIM) which is an affiliate of al-Qaeda operating in West Africa. The group brings constant terror to Mali. But his wife, Els Woodke, is under threat from the U.S. government if she discloses information. This makes it difficult for her to raise funds to obtain his release.

Our letter to the Foreign Minister of Mali states: “We urge that proof of Mr. Woodke’s mental and physical condition be demanded and determined before any negotiations begin. We also urge that his release be unconditional. We ask that updates be provided to both the United States Government and to the Woodke family.”

The signing groups acted because there is little effort from the White House to find and seek the release of Americans held hostage.

The last American captive rescued in Nigeria was 27-year-old Philip Walton, who had been abducted from his home in southern Niger. US special forces including Seal Team 7 conducted a raid that freed him in October 2020 while President Trump was in office.

Vietnam: There is also a failure on the part of the Biden White House to deal with the increasing oppression of Christians and Buddhists in Vietnam by the Communist Party. The Biden Administration ignores abuses by the Communist Party that rules Vietnam as it seeks that nation as part of an anti-China coalition.

Vietnam is ruled by the same repressive communist party as China. There is no difference, except that in Vietnam the Christians are treated worse than the Christians in China.

Then there is the horror in Bangladesh when both Christians and Buddhists are persecuted by Muslims. Buddhist and Christian girls are kidnapped and forced into Muslim marriages and never see their families again.

More on the Nigeria mission

Examining the books: While in Jos, Nigeria a special Board of Directors meeting was held for the orphanage. I had arranged in advance for an auditor to go over the books of the orphanage to calculate losses and costs associated with moving.

I attended the Board of Directors meeting and heard the presentation of the auditor and read his full report. The outcome made me question the viability of staying in the newly rented facility versus finding a better location.

After reading the full audit I made the request that there be some wage adjustments as I did not believe the administrator was making enough money to be able to handle his task for the orphanage full time. There were also adjustments to the feeding program after I examined the books. I also authorized some plumbing and electrical repairs at our cost.

I had already given the go ahead to build temporary classrooms on the grounds. More on that later.

Again … This is why it is important for me to make personal visits to these locations! I have been doing this work for decades to one degree or the other and it is my responsibility to make sure funds of supporters are being used for the best effect.

Feeding program continues: The current program to provide protein for the orphanage in Nigeria will continue for at least the next six months. I have authorized payments of $2411.00 per month for food. This is a slight reduction in American dollars because we are getting a much better exchange rate of Nigerian Naira.

The program provides the protein for two meals a day for all the children and workers including the teachers. The orphanage is continuing to run a full time Christian school for the orphans despite the forced move to smaller quarters. Jesus is the center of everything at the orphanage and our support continues to allow the children to have a protected atmosphere.

The funds to build temporary classrooms on the grounds of the building we leased have already been transferred and the construction is complete.

These classrooms are not permanent structures as was the school building, we built at the IDP camp in Benue State. The temporary classrooms at the orphanage are made of thin board and the floors are dirt. No cement was used.

There is no way to know right now if the location will be permanent, but I just don’t think it will work.

The owner is asking a ridiculously high price for the building, but we have signed a two-year lease and we have time to negotiate or find a better location.

First, we need a structural engineer to evaluate the entire building.

While Nancy and I were at the new location in January we found plumbing and electrical issues. The plumbing is a real problem as the design was for perhaps 25 people not 150. Extensive work must be done. We have already added toilets and fixed showers that did not work. Because we have the two-year lease, we have time to look for other options.

For what the owner wants we can buy land and build out as many buildings as we had at Miango. We are looking. Please pray the best option for the children can be found.

There are a variety of partners we can work with in Benue including the TIV Tribe which built the school building at the Daudu IDP camp.

While in Benue State we visited Christian orphanages and schools that needed assistance. Some needed basic aid and others needed some advanced aid such as computers.

There is a reason I personally visit with local ministries in the Middle East, Nigeria, or wherever the Religious Freedom Coalition works. There are sometimes difficult questions to be asked that are best asked in person as you will see.

A school we can’t support! We visited one private Christian school in Makurdi that had the types of needs we have worked on before in Nigeria. I visited the classes and noted that there were a few Muslim students. Did they receive the same Bible instruction as the Christians?

Before leaving I asked the school superintendent if the Muslim students attended the same religious classes as the Christian students and I got this odd response:

“The Muslims have an Imam religious instructor, but they are taught the same moral values and conduct as are taught in the Bible programs.”

I will not authorize any support for an educational project for children that includes having an Imam on the school grounds to teach out of the Quran. If Muslim parents want their children to go to a superior Christian school for education, then they should accept that their children will receive the true Word of God while at that school.

Diapers for Refugees
Scroll to top