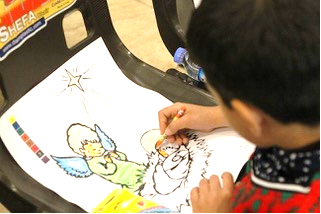 Update:  Christmas in Qaraqosh … Taking Jesus back to an ancient Christian town

Update:  More about our mission to the West Bank – Dinner with tortured Christians

New:       Can we do more in northern Nigeria to help persecuted Christians?

Iraq:  In the first newsletter of 2018 I briefly described Christmas celebrations for Christian refugee children in four nations: Nigeria, Lebanon, Jordan and Iraq. I supplied very little detail for the events in Iraq because for the first time since the program began there, I was not present. For the previous three years I attended every Christmas event in Iraq, but was unable to this year because of airport closures in the Kurdish region of Iraq. I have now received full reports from our ministry partners in Iraq. Of particular interest are those concerning the three Christmas for Refugees events in the town of Qaraqosh.

On Christmas Day 2016, not a single Christian child was in Qaraqosh. I know this because just before Christmas that year, I led a convoy of trucks with food and water from Erbil to Qaraqosh to bring badly needed aid to the Christian militia guarding the town.  When I again visited Qaraqosh in June 2017 only a handful of families had returned because of the level of destruction and the unsanitary conditions made living there nearly impossible.

Just one year later in December of 2017, there were about 5,046 families, but the exact number is variable because some give up after a short period there.  Living in a burnt out home with no major appliances such as stoves or refrigerators is difficult, especially for those with young children or family members having special medical conditions. Below is a report on just one of the three events in Qaraqosh as I received it from our ministry coordinator in Iraq. In all nearly 1,000 children attended events in Qaraqosh.

This town has been free of Christian people and controlled by ISIS troops for more than three years and now unfortunately, we can see many of the houses destroyed by coalition forces airstrikes reportedly aimed at neutralizing a car bomb. Nearly all of the buildings were burnt, severely damaged and filled with garbage and dirt. The civilians are still waiting for the reconstruction efforts they need so much, generators, electricity, water, …etc.

In spite of all these bad conditions in Qaraqoush many civilians decided to return back to their houses, they are concerned about the lives of their children and it was really a great privilege and tremendous blessing to have an opportunity to reflect Jesus light and show the love of Jesus to all poor children surrounding us and we felt the reaction of  gratitude and glee that appear in the faces of these children due to the blessed time we spent with them in worshiping, praying, distributing gifts and sharing food all together.

We celebrated the birth of our lord Jesus with 447 Christian kids from ages 10 to 11 years. The responsible pastor in the local church at Qarakoush told us 440 children and we were surprised that this number was increased rapidly to 447. I would happily like to inform you that five members from our team cooperating with four pastors and 28 members belonging to the local church acting as the hands and feet of Jesus to provide Christmas for the children.

We prayed before we started that this Christmas will be filled with peace, joy and grace of God. The points below are a brief description of this Christmas for Refugees event

1- Worship time: we had a blessed time with these humble kids and the most amazing thing is that when we look back at the pictures we feel that we returned to our childhood when we were singing Christmas worship songs with this huge number of lovely kids.

2- Sketch about Jesus birth: It teaches them how to be able to live the joy of Jesus birth through this holy occasion regardless of their bad current conditions.

5- Coloring time: Its favorite time for kids according to their ability to express their deeply inner feeling through it. They were coloring picture of Jesus as new baby born in a manger and thank God for the food that He himself provided to them. Praise the lord!

6- Lunch time: they have lunch altogether which contains sandwiches with juice and fruits. And they listen to the worship songs.

7- Zeal time for kids (Santa Claus arrival): They were very excited to see Santa and wonder what did he bring for them.

8- Distribution of gifts: every one of them received a box gift plus a small booklet named (Talk with me about God) that’s been donated by our brothers and sisters in Christ. The reaction of lovely kids there was super helpful, they have been so grateful to what we have done for them. (Some gifts supplied by Samaritans Purse)

The fact is that God, is the one who wanted us to be in this position and he is the one who created this opportunity. The reality of Christmas was the blessing of the means by the Christmas for Refugees organization.

NOTE: I received one report from our partner ministry in Iraq for each of the three events in Qaraqosh and the other events in the Ankawa / Erbil area. I also received edited videos that are available at www.Christmas4Refugees.org

The West Bank:  In the first newsletter of the year I mentioned briefly that we could not enter Iraq to help coordinate Christmas programs there that my wife Nancy and I visited our older missions in what is most often referred to as the West Bank.

We visited Hope School which the Religious Freedom Coalition supported for over a decade until the head master Solomon Noir died and contact was lost. We had paid to refurbish the kitchen of this Christian school in Beit Jala and supplied many other enhancements. While visiting Beit Jala, which is just north of Bethlehem, I had the opportunity to meet and pray with the new Head Mater of the Hope School.

We stayed in the apartment of our good friends David and Leah Ortiz who have served an evangelistic ministry in Israel for decades. David served in the Israeli Defense Force as did all but one of his children. The youngest son, Ami, was severely wounded in a bombing of the Ortiz apartment in 2008 …. Yes … This is the same apartment we stayed in. Sadly, it was not a Muslim but rather a Jewish extremist who bombed the apartment. Ami spent a full year in the hospital and still today needs some surgeries.

In the last newsletter I mentioned travelling to Bethlehem and other areas in “Area A” and having lunch with a Palestinian Christian family. Area A is the zone controlled by the Palestinian Authority under the agreement reached during the Bill Clinton Administration. After this agreement the vast majority of Christians were run out of Bethlehem which is in Area A.

While there we visited Arab majority town of Tayibe which is in Israel proper. Only Arabs who have Israeli citizenship live in Arab towns such as these. My wife and I had dinner with a former Muslim who had converted to Christianity under the Ministry of my friend David Ortiz. The Muslim convert invited a friend of his that he had won to Christ while they both served time in a Palestinian jail for the crime of “colluding with our enemy Israel.”

Since their time in jail both men have managed to obtain Israeli citizenship. This does not mean they are out of danger. Former Muslims who converted to Christianity are persecuted among their own people even in Israel. They recounted the torture to me that they had endured while jailed and showed me their scars. They could have stopped the torture by renouncing Jesus Christ, but both choose Salvation through Him and endured the physical torture.

I rarely write about our ministry efforts in the West Bank for various reasons. Some of the work we will be doing there over the next year I simple cannot write about because it would jeopardize our efforts.

While in Bethlehem I visited an old friend, who owns a wonderful shop that sells Olive wood carvings and Jerusalem stone. I have in my home a Last Supper carving in Olive wood that I and my wife cherish. We have had it since we led a tour to Israel in 1994. In 2002 the shop was nearly destroyed along with a small hotel the family owned during fighting between the Israeli Army and PLO fighters. The shop was closed for some time. I had visited twice hoping to see my old friend only to find the shop closed while his family took refuge in Cyprus.

When I arrive at his shop at Christmas time and saw buses parked out front my heart leaped with joy for the family. I met and talked for some time with my old friend and promised that I would once again send tours his way. Over the years I led may tours to Israel, but my work in the Middle East since the Second Gulf War has led me do most of my work with Christians in the Levant.

Sometime this year I hope I will be able to discuss a project I am working on in the West Bank, but now is not the time.

Nigeria: I cannot begin to tell you how great the need is in northern Nigeria. More than a dozen Christians have been murdered there for their faith just since I mailed you the January 9th edition of the Chairman’s Report. The number of Christian orphans is astounding as Christian parents are slaughtered by Muslim terrorist groups at an alarming rate.

Most in America did not know about the persecution of Christians until the night of April 15th, 2014 when 276 Christian female students were kidnapped by the Boko Haram which is now affiliated with the Islamic State. I have written about the Boko Haram and Nigerian Christians numerous times and have wanted to do more to help.

We must expand our efforts in Nigeria if we are able, but we cannot jeopardize our programs in the Middle East. The Christmas for Refugees programs have become a tradition in churches that assist refugees in Lebanon, Jordan and Iraq. The programs must continue and expand to help families return to normal lives as much as possible. Please pray for the direction of God for the Christmas for Refugees program.

Original HR-390 language must be reinstated
Scroll to top