(But an Iranian with $500,000 to invest is welcomed in with his family) More than 100 Iranian Christians who were pre-screened by the State Department before traveling from Iran to Vienna, Austria may now be forced to return to Iran. They sold their property, cars and other belongings before leaving Iran, because they had received assurance they qualified for Green Cards under the Lautenberg Amendment.

This 1989 law was originally written to help Jews in the former Soviet Union after the fall of that nation.  It was expanded to include Christians and other minorities from former Soviet states and from Iran. From 1989 until President Donald Trump entered office, refugee cases under the Lautenberg Amendment had an approval rate of almost 100 percent.

The Lautenberg Amendment requires the government to explain a denial of refugee status “to the maximum extent feasible.” But in the case of the Iranian Christians, they are being told that denial is a matter of discretion.

Hans Van de Weerd, vice president for U.S. programs at the International Rescue Committee said, “The hypocrisy of this administration has no boundaries. It criticizes the Iranian regime, encouraged the protests, but now refuses to provide safety to those who flee and are not safe from the Iranian government.”

There is a big question here: Is President Trump aware of the policy under Secretary of State Tillerson to refuse refugee status to persecuted Christians from Iran? Within days of his swearing in as President, Trump ordered a stop to all entries into the US from Iran, Iraq and Syria in an effort to stop would-be terrorists, he said. Surely he did not intend to stop endangered Christians from entering the USA!

However, the State Department under a Trump appointee, Secretary of State Rex Tillerson, has continued to allow immigration for Muslims from nations such as Saudi Arabia. This despite the fact that 15 of the 19 terrorists who attacked us on 9-11 were from Saudi Arabia — and the four who were not, still had some ties to Saudi Arabia.

Of course, Iranians are still welcome to come to America for a large enough cash investment, despite President Trump’s constant verbal attacks on Iran as a sponsor of terrorism.

A half-million bucks buys a Green Card: Most Americans are not aware that a Green Card can be purchased for an “investment” of $1,000,000. And for a mere $500,000 a Green Card can be obtained if the individual intends to “actively work” in a business in a “target economic zone.” The Green Card is a path to citizenship. Overseas it is called the “Golden Green Card” by those who can afford it.

Under the Trump Administration in 2017, a total of forty Iranians and their families were handed Green Cards under the EB-5 program that sells resident status for an investment. Of those, only four put up $1,000,000 and the other thirty-six, along with their immediate families, received Green Cards for an investment of $500,000.

To me this is a double standard. Our State Department is basically saying, “If you are an Iranian with cash you are welcome no matter what your religion, but if you are a persecuted Christian or Jew, go back to Iran.” The State Department, however, is now blaming the Department of Homeland Security, saying the mass denial mentioned above was caused by a “change to the refugee vetting process.” Is it the same vetting for EB-5 applicants?

While most of the Iranian families seeking refuge are Catholic, there is also one Jewish family in the group stranded in Vienna. These families had received prescreening assurances from the United States while President Obama was still in office. If each of these families had the cash, they could all just buy their way in from Iran. This is wrong! 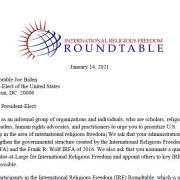 Christmas in the West Bank