Senator Corker gutted the aid bill for Iraqi and Syrian Christians:  The Religious Freedom Coalition’s 2017 post card program resulted in hundreds of thousands of petitions being mailed to Congress, resulting in the passage by voice vote of the Syria and Iraq Genocide Relief and Accountability Act (HR-390).  Then, in the Senate, the chairman of the Senate Foreign Relations Committee held up the bill authored by Congressman Chris Smith for months.

By the time Senator Corker finally presented the bill to his committee for a vote, the actual aid language had been gutted and replaced with bizarre anti-Russia rhetoric that had nothing to do with assisting Christians.  Rather than rush aid to those in need in the Nineveh Plain, Senator Corker’s version set up a committee to examine, among other things, Russian interference in Syria and the “atrocities” of the Syrian government.  The atrocities of the Islamic State came in a distant third.

Most of Senator Corker’s version of HR-390 is centered on the creation of a “Syria Study Group” to “review the current situation with respect to the United States military and diplomatic strategy in Syria, including a review of current United States objectives in Syria and the desired end state in Syria.”

The Group is then to “develop recommendations on a military and diplomatic strategy for the United States with respect to the conflict in Syria.”

What do “recommendations on a military and diplomatic strategy” have to do with the original purpose of HR-390 which was to assist Christians and other minorities in Iraq and Syria who had suffered persecution by Sunni Muslim militias to the extent of genocide?

The original language of HR-390 must be reinstated — and you can help!

Our 2018 postcard campaign is aimed only at Senators, and at Senate Majority Leader McConnell in particular.  Over the next few weeks you will be receiving new post cards to mail to your Senators and to Majority Leader McConnell demanding that the HR-390 language be restored, and that a vote be held to bring real aid to the Christian victims of genocide.  Please mail the new cards even if you have sent previous cards demanding passage of HR-390.

While President Trump has reached out to the Christian victims of Sunni Muslim terror,  now the Congress must act to direct funds and resources to help Christians.

What is going on at the State Department?

So why is the State Department denying refugee status to 100 Iranian Christians who were actually invited to apply for asylum under a 27-year-old law granting persecuted religious minorities special refugee status?

Nearly all are Assyrian and Armenian Christians who have family members in the United States.  They applied for asylum under the Lautenberg Amendment, and were approved by the United Nations High Commission on Refugees (UNHCR) for refugee status.  They traveled to Vienna, Austria at their own expense where they underwent vetting by the U.S. Department of Homeland Security.  And they have been living in shelters in Austria ever since!

Austria is paying the room and board of these refugees, but is now threatening to deport them because the U.S State Department is refusing to issue them visas.  If they are returned to Iran, they will probably be charged with “acting against national security” because they criticized the government of Iran by asking for asylum.  And, they would have nowhere to live in Iran, because they sold all their property prior to leaving, in order to have funds for the trip.

The last word came not from the State Department but from the refugees’ attorneys, who said that it “appears” the Trump administration is trying to relocate them to third countries.  The question is why?!

Can Ambassador Sam Brownback bring sanity to State?  Senate Democrats fought hard to derail the appointment of Governor Sam Brownback as Ambassador for International Religious Freedom.  They were angry with him because as Senator, he voted for the same Defense of Marriage Act that President Bill Clinton signed into law.  Since then the tide in the Democrat Party has turned to the point it seems that, regardless of qualifications, any nominee’s record on “gay rights” is the deciding factor in whether or not he will be approved for a position.

In the end, the Senate vote was a tie of 49-49, with all Democrats (even the “moderates”)  voting against this good man whom I have known for decades.  The hatred against him is due to his outspoken Christian faith and values.  Vice President Pence had to rush over to the Senate to cast the vote that broke the tie and allowed the confirmation of Ambassador Brownback.

Some history on Sam Brownback:  On that horrible day of the 9/11 attack, I was on my way to a press conference in support of the Sudan Peace Act sponsored by Senator Sam Brownback and Senator Bill Frist.  This bill, which the Bush Administration opposed, would have punished the Sudan for genocide of Christians in the South.

The press conference of course had to be called off.  It was only one example of my work with and support for Senator Brownback.  Along with Peggy Nienaber, who was the RFC Legislative Director at the time, I continued for many years to work with Senator Brownback, not only on the Sudan Peace Act, but also on his other projects to help persecuted Christians through the Senate Values Action Team, of which he was chairman.

I personally recruited Senator Roy Blunt to replace Senator Brownback as chair of the Senate Values Action Team.  Senator Blunt did take over, but then, unexpectedly and unfortunately, he decided to drop the international issues that were so important to Sam Brownback and myself, and instead focused solely on domestic policies.

Senator Lankford takes over VAT:  There is even more really good news for organizations such as ours that work on religious freedom issues at the international level, such as with Christians in the Middle East.  Senator Blunt is stepping aside as chairman of the Senate Values Action Team, and Senator James Lankford is taking on that role.

Under Senator Lankford’s leadership, the Senate VAT will once again become involved in issues of religious freedom in the Middle East and in areas of Africa where Christians are persecuted and attacked.  Currently I am working with Senator Lankford’s office to arrange a reception for Ambassador Brownback to meet with representatives of organizations such as the Religious Freedom Coalition that work within the Senate VAT.

Praying on the steps of the Supreme Court. William J. Murray is at far left as Capitol Hill Christian leaders pray during annual live Nativity

with congressmen and senators who share our values.  I am a member of the Capitol Hill Club which is very difficult to join, requiring the recommendation of members and a vote.  Democrats are not allowed. I often meet with  congressmen there and with leaders of other social conservative organizations.

I regularly participate in events such as the National Day of Prayer, and often accept invitations for prayer meetings with congressmen.  And each year, just before Christmas, I participate in a live Nativity, in which volunteers dressed as the Holy Family, shepherds, and Wise Men walk in a procession through the streets of the capital.  A camel named “Junior,” some sheep and goats are also included.  At the Supreme Court and at the Capitol Building, we stop and pray that this nation, our Supreme Court, and our leaders in Washington will recognize the truth and authority of the Gospel.

Our Aid Programs: Diapers for Refugees, and Easter at Nigerian Orphanage

Nigeria:  I will be traveling to Nigeria for Easter.  As of now my plans are to arrive in Nigeria on Good Friday.  I will fly directly into Abuja which is the capital, located in the center of the country.  By vehicle I will then travel further north to Jos, located in Plateau State.  Twelve of Nigeria’s states have Sharia law which discriminates against all non-Muslims and against women.  Some history:  All of Nigeria was once Christianized by evangelism, but slowly over the past few hundred years, Christians have been violently driven from the north of the country.  Plateau State is in the middle of Nigeria with Muslim controlled Sharia law states to the north and secular, more democratically run, states to the south.  Violent clashes have occurred in Plateau State, particularly in Jos, as Muslim groups have tried to force the area to become Sharia compliant.  The state contains many Christians who have fled from more northern areas, and as a result has the highest number of displaced persons of any state in Nigeria.

My first task will be to visit and ascertain the needs of the orphanage outside of Jos where our first Christmas for Refugees event in Nigeria was held this past December.  Most of the children in the orphanage lost their parents who were murdered either by the Boko Haram which is associated with the Islamic State, or by Sunni Muslim Fulani tribesmen who terrorize Christians in that area.  (NOTE:  The current president of Nigeria is a member of the Fulani Tribe.  He was elected in 2015 despite the fact that he previously led a military coup that ruled Nigeria from December 1983 to August 1985).

As part of my visit to the orphanage, I want to plan a trial-run Easter program.  In my last letter to you, I asked for your advice on starting Easter for Refugees.  If you haven’t responded, please do so — or you can respond to this newsletter with support for Easter in Nigeria.  I will report in more detail soon.  While in Nigeria, I will also visit with other local ministries that care for Christian victims of Islamic terror.  Please pray for the success of the Easter mission trip.

Doubling the Diaper Program in Iraq:  Currently we deliver 160,000 diapers every three months to displaced Christian families with infants or toddlers.  That sounds like a huge number of diapers — and it is a full truck load — but in reality, it is enough for just 6 diapers per day for 300 families.  Christian families moving back to rebuild their devastated towns and villages have no sanitary facilities.  There is still no running water in Qaraqosh, as an example.

The need is urgent to double the program to 600 families for 2018.  That would require 320,000 diapers each quarter or two full truck loads.  This expansion, along with needed sanitary pads for the mothers, will increase our costs from about $18,000 per delivery to at least $36,000 per delivery.  And shipping and managing multiple deliveries in multiple villages will increase costs even more.  In December of 2017, we were only able to increase the delivery about 10%.

However, the number of supporters of the Religious Freedom Coalition has increased over the past two years and I believe that with much prayer the Diapers for Refugees program can be doubled in 2018.  Let us all pray that as Christians return to rebuild their homes in the devastated villages of northern Iraq, that running water will be restored by 2019, so that the need for disposable diapers will decrease.  Please pray with me for these persecuted Christians. 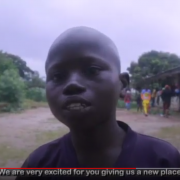