Update:  Meeting with our new Ambassador for International Religious Freedom

Update:  Christian refugees sent back to Iran – but rich Iranians can buy a Green Card 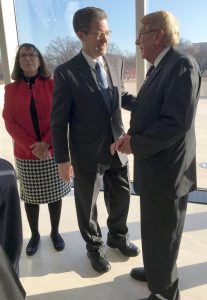 Prior to becoming governor of Kansas, Sam Brownback was an activist senator supporting social conservative causes and religious freedom.  Democrats in the Senate pulled out every trick in the book to derail his confirmation.  Minority Leader Chuck Schumer ran out the clock in 2017, forcing President Trump to reappoint Sam Brownback again this year.  The main complaint of Democrats was Brownback’s support for the traditional family.  They wanted an Ambassador for International Religious Freedom who would work primarily to promote the gay agenda.

Senator Schumer has plainly stated that he wants to force nations such as those in Africa to disregard their religious heritage and accept gay marriage.  That is his idea of “religious freedom.”  Of course, he has no evident concern for the many persecuted Christians in the Middle East, Nigeria or Indonesia.

Every single Democrat, including the “moderates,” voted against Sam Brownback’s confirmation.  Because of the absence of Republican Senator John McCain, the vote was tied, and Vice President Pence had to travel to the Senate to cast the deciding vote for confirmation.

Simply put, the Democrats in the Senate did not want those holding traditional religious beliefs to be represented by an effective Ambassador for International Religious Freedom.

Ambassador Brownback has so many fans among conservatives in Washington that 450 people showed up for his reception.  The event actually had to be moved to a hall across from the State Department because of the number of people who RSVP’d that they would be there to congratulate him on his appointment.

All of us in Washington who work on issues related to religious freedom look forward to working with Ambassador Sam Brownback and we pray he is able to change attitudes at a State Department that is overwhelmingly against Christian values.

(But Iranian Muslims with $500,000 are welcome):  More than 100 Iranian Christians who were pre-screened by the State Department before traveling from Iran to Vienna, Austria may now be forced to return to Iran.  They had sold property, cars and other belongings before leaving, because they had received assurance they qualified under the Lautenberg Amendment.

This 1989 law was originally written to help Jews in the former Soviet Union after the fall of that nation.  It was expanded to include Christians and other minorities from former Soviet states and from Iran.  From 1989 until President Donald Trump entered office, refugee cases under the Lautenberg Amendment had an approval rate of almost 100 percent.

The Lautenberg Amendment requires the government to explain a denial of refugee status “to the maximum extent feasible.”  But in the case of the Iranian Christians, they are being told that denial is a matter of discretion.

Hans Van de Weerd, Vice President for U.S. Programs at the International Rescue Committee said, “The hypocrisy of this administration has no boundaries.  It criticizes the Iranian regime, encouraged the protests, but now refuses to provide safety to those who flee and are not safe from the Iranian government.”

There is a big question:  Is President Trump aware of the policy under Secretary of State Tillerson to refuse refugee status to persecuted Christians from Iran?  Within days of being sworn in, President Trump ordered a stop to all entries into the U.S. from Iran, Iraq, and Syria to stop terrorists.  Surely, he did not intend to stop endangered Christians from entering the USA!

However, the State Department, under Tillerson, has continued to allow the very liberal Obama policy of allowing immigration for Muslims from nations such as Saudi Arabia.  This despite the fact that 15 of the 19 terrorists who attacked us on 9/11 were from Saudi Arabia — and the four who were not, had ties to Saudi Arabia.

Under the Trump Administration in 2017, a total of forty Iranians and their families were handed Green Cards under the EB-5 program that sells resident status for an investment.  Of those, only four put up $1,000,000 and the other thirty-six, along with their immediate families, received Green Cards for an investment of $500,000.

To me this is a double standard.  Our State Department is basically saying, “If you are an Iranian with cash you are welcome no matter what your religion, but if you are a persecuted Christian or Jew, go back to Iran.”  The State Department, however, is now blaming the Department of Homeland Security saying the reason for the mass denial mentioned above was meant to “change the refugee vetting process.”

While most of the Iranian families seeking refuge are Catholic, there is also one Jewish family in the group stranded in Vienna.  This family had received prescreening assurances from the United States while President Obama was still in office.  If they and all the Christian families had the cash, they could just buy their way in from Iran.  This is wrong!

110 girls taken:  The Sunni Muslim terrorist group, Boko Haram, which has pledged loyalty to the Islamic State, has kidnapped more young girls in Nigeria.  This time 110 girls, some as young as 13, were taken from the Government Girls’ Science and Technical College in Dapchi.  The head of the parents’ association said his 16-year-old daughter was one of those taken.

In April 2014, in the town of Chibok just 170 miles southeast of Dapchi, 274 girls, almost all Christian, were kidnapped by the Boko Haram.  Of those kidnapped in Chibok, 100 remain missing and are probably in forced marriages to jihadists.

There is one news report that the newest group to be kidnapped has already been taken out of Nigeria and into neighboring Niger by the Islamic terrorists.

Crimes against humanity and nature itself continue to be committed in the name of Allah by the Boko Haram in Nigeria, just as is done by various Sunni Muslim terrorist groups in Iraq and Syria.  Sadly, some groups in Syria were armed in the past by Saudi Arabia and the United States in order to bring about the downfall of Assad’s secular government.

Supporter poll confirms plans for Easter program trial in Nigeria:  Launching an Easter for Refugees program received strong support in our recent supporters’ poll, although responses are still coming in.  For specific programs, Diapers for Refugees is first, but there was a lot of support for an Easter program as well.

There will be a trial Easter program this year at the orphanage where we held the Christmas program last year.  This is a pilot program for Easter as there are a lot of unknowns in preparing a more solemn event.  Christmas is more widely and openly celebrated than Easter in Nigeria, just as in the Middle East.

The program must be carefully planned.  At this point there will be hymns, a play and a meal.  Each child will also receive a gift basket to be used for the remainder of the year.

In the next Chairman’s Report, which I will mail out immediately before I leave for Nigeria, I will be able to give you full details about the program we are planning.

Please pray for our mission in Nigeria!

The need is critical. Despite attacks on Christians on a daily basis, the Western media is silent unless there is something like a mass kidnapping.

Doubling the Diaper Program in Iraq:  Our recent poll of supporters currently gives the Diapers for Refugees program first place among our programs, but it is still number two overall.  Most of those responding to the January poll so far have told me to “Do it all / Whichever you think is best” which includes Diapers for Refugees, Christmas for Refugees, the Nigeria Easter program and our advocacy programs on Capitol Hill.

That is a tall order.  The current isolated status of the Kurdish region of northern Iraq where our mission on the Nineveh Plain is located makes the tall order even more complicated.

However, this significant increase was only made possible by one very generous supporter whom the Lord has blessed who donated $8,000 toward the March diaper delivery. I am worried we may not be able to maintain this growth for the June diaper delivery.

Please pray that once again we will meet our goal in June of expanding the diaper program.  The need is so great for these refugee families!

So far this year we have mailed 250,000 personalized postcards supporting the original language of HR-390 to concerned Christians in all 50 states.  You should have received one already or will in the coming days/weeks.  The original purpose of this bill was to aid persecuted Christians.  Senator Corker changed the language, making the goal  to form some new committee to come up with a strategic American plan for Syria and shifting the blame away from ISIS and onto Russia in an attempt to score political points against President Trump.

We can’t get into the military aspect; that is not the role of the Religious Freedom Coalition.  But what we can do is urge Congress to help the Christians of Iraq and Syria who have been persecuted to the point of genocide by Sunni Muslim terror.

By now you should have received new post cards to mail to your Senators and congressmen.  If you have not mailed them, please do so today.  These are not the same as the ones I sent to you before.  The new cards call for the original HR-390 language to be restored.