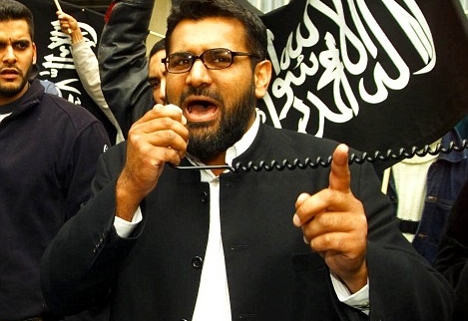 The White House and Sharia / Was it a terror attack Mr. President? / Money rolls in to the Obama campaign / WOW: $4 billion cut from $1.5 trillion! / US government paid out record one trillion dollars in February / The church and the 2012 candidates / Feisal Rauf’s sharia whitewash / Only Christian Pakistani cabinet member assassinated

SHARIA AT THE WHITE HOUSE – Imam Anjem Choudary, whose group has been banned in the U.K., announced a pro-sharia law rally in front of the White House for March 3, 2011. Choudary said that by force the Islamic flag would fly over the White House and that sharia, or Islamic law, would replace the Constitution. Numerous leaders of the anti-Sharia movement including William J. Murray of the Religious Freedom Coalition held a news conference in front of the White House at noon on the day the demonstration was to occur. Read full statement.
TERROR ATTACK ON OUR TROOPS – This week a Muslim from Kosovo walked onto a bus carrying US airmen at an airport in Germany, and while screaming “Allah Akbar!” he killed two airmen and wounded two others. It is reported that he was a civilian employee of the air base — otherwise he would not have had access to the bus. President Obama’s statement about the attack was very much like the statement he made when Major Hassan killed 13 fellow soldiers in the Ft. Hood massacre. The President made no mention of terror. He opened his remarks by referring to the Islamic attack on unarmed airmen as “a tragic event that took place earlier today in Frankfurt, Germany.” It took seven weeks for the White House to admit that Major Hassan, who also screamed Allah Akbar while killing unarmed servicemen and women, was indeed a terrorist. The final report on Hassan never mentioned that he was a Muslim. We can expect the same from the White House concerning this attack.
AND THE MONEY ROLLS IN – During the 2008 election Barack Obama’s campaign committee officially raised $745 million dollars. After the election, at the end of 2008, Obama’s committee still had $15 million on hand. As Obama starts his run for re-election he is seeking over $1 billion dollars. In contrast his last opponent, Senator John McCain, raised only $380 million and that included federal matching funds.
THE CONGRESS
THE $4 BILLION CUT – Right now the government has to borrow 40 cents of every dollar it spends. This year alone the federal government will rack up another $1.5 trillion in debt. So far, the Congress has managed to cut $4 billion of that. The Republicans want to cut another $60 billion, including funding for Planned Parenthood. The Democrats say it is impossible to cut more that $6 billion more. The proposed Democrat cuts represent less than 1% of the deficit spending and the Republican proposal is less than 5%. Under either plan the government will still borrow nearly $1.5 trillion this year alone.
ONE TRILLION IN CHECKS IN ONE MONTH – In the month of February the government wrote over $1 trillion in checks for the first time ever. But wait, isn’t’ the budget just $3.83 trillion for the year? Yes, but that does not include debt service. Of the $1 trillion outflow in February $585 billion was to pay off debt, both principal and interest. To do this the government had to borrow $660 billion in February. While most of the borrowed money went to pay debt the rest was needed for Obama’s various programs the Congress approved. It is all on the Treasury balance sheet, read it and weep for the nation.

Please help this blog site this month with a donation.

WARNING TO MUSLIMS: DON’T THREATEN SOUTH PARK – It may be OK to build an offensive mosque at Ground Zero or to call for sharia law being forced upon women — but threatening the purveyors of violent profane filth can get a Muslim tossed into jail. A 21-year-old convert to Islam who threatened the creators of the ‘South Park’ cartoon has been sentenced to 25 years in prison. The college drop-out, Zachary Chesser, was sentenced by a U.S. District Court in Alexandria, Virginia. He pleaded guilty to supporting the al-Shabab terrorist group in Somalia and posting online threats against the South Park creators. The threats of physical harm were made, he said, because of an episode of South Park insulting to Muhammad. NOTE: When conservative leaders who are critical of Islam in the United States have their lives threatened, law enforcement agencies never take the threats seriously and often refuse to take a report.
THE CHURCH AND THE 2012 CANDIDATES – I was stunned by a poll done by the Barna Organization on favorable/unfavorable ratings for the GOP candidates for president. Among Catholics and Protestants, former Governor Sarah Palin’s unfavorable ratings are 64% and 50% respectively. Newt Gingrich’s unfavorable ratings are nearly as high among Christians. On the favorable side, former Governor Mike Huckabee is the leader, with Mitt Romney a close second. See poll results.

NO 911 MOSQUE!
FEISAL RAUF’S SHARIA WHITEWASH – Despite all the suffering caused every day by Sharia law, mostly to Christians but also to Muslims, Imam Feisal Rauf actually claimed during a Tuesday panel that “the fundamentals of Islamic law insist that there be freedom of religion.” Rauf and Denver Archbishop Charles Chaput disagreed over the role of Sharia in society during a panel discussion held Tuesday at George Washington University’s Berkley Center for Religion, Peace, and World Affairs. Read more at the Washington Examiner NO 911 MOSQUE – Visit the RFC site dedicated to the Ground Zero mosque controversy at www.no911mosque.org
INTERNATIONAL ONLY CHRISTIAN PAKISTANI CABINET MEMBER ASSASSINATED – Shahbaz Bhatti, who was the minister of religious minorities, was the second high-level Pakistani government official to be assassinated in the past two months. Both officials had opposed Pakistan’s “blasphemy” laws that impose the death penalty for insulting Islam. He had been assigned police guards, but did not use them because it was a bodyguard who had killed the other official, Punjab province Governor Salman Taseer. Tens of thousands of Muslims flooded the streets to celebrate the murder of Taseer, showing the true nature of this “moderate” Islamic nation that is an ally of the United States. Read details
CHRISTIAN INTERNET STORE