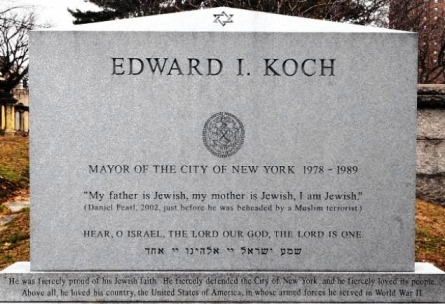 “My father is Jewish, my mother is Jewish, I am Jewish.” Those were the final words of Daniel Pearl, a reporter for the Wall Street Journal before he was beheaded in 2002. The beheading was filmed and proudly distributed in the Islamic areas of the world as proof of the good deed of following the way of Mohammed. In the Islamic Hadith the example is given:

Then the stones or trees will call: ‘Oh Muslim, servant of Allah, there is a Jew behind me, come and kill him.’”

Mayor Edward Koch, who was Jewish, was an old fashioned Democrat, the kind that used to exist before that Party was taken over by the radical left. He served as an infantryman during World War II and later as both a congressman from New York and the mayor of New York City for three terms. As mayor he cut spending and taxes and actually reduced the city payroll. He crossed party lines to endorse President George W. Bush in 2004. The endorsement of Bush had much to do with his understanding of the peril faced by Israel from its Islamic neighbors and his knowledge of the threat of Islamic expansionism.

When he died the Jewish Times said of him: “Originally a crusader against Communism and eventually against what he viewed as Muslim extremism, Mayor Koch was a one-man anomaly: a self-declared secular Jew who harbored a strong belief in God and embraced the trappings of the faith on his own terms.”

The New York and national media did not report on much of what he had to say about “Muslim extremism.” While saying Muslims had a right to build a mosque where they pleased he said the construction of one at Ground Zero was insensitive.

The heart of Mayor Koch’s concern over the expansion of Islamism is probably best exemplified by his tombstone. On it are the final words of Daniel Pearl and beneath those words is an explanation of the circumstances in which they were uttered:

Many things I did not agree on with Mayor Edward Koch, but his final statement, the one he chose for his own tombstone, should be a reminder to us all of the threat facing Western civilization from those who truly believe the words of Mohammed.

Obama Administration blocks UN resolution against car bombing – On February 21st four car bombs were detonated at various locations inside Damascus. There were no clear strategic targets and the vast majority of those who died were civilians. If police are counted as civilians, then everyone who died was a civilian. The largest bomb was detonated near a school, killing 60 people including children. In that one bombing alone 200 were injured, many severely. Al-Qaeda and its associated organizations claimed responsibility for the bombings.

Apparently some car bombings that kill and maim civilians are worse than others in the eyes of the Obama Administration. President Obama’s UN Ambassador wants UN resolutions condemning car bombings in Afghanistan and Iraq. The Obama Administration also wants UN resolutions condemning the secular government of Syria for bombing bases of “rebel” forces supported by the United States — but none against the abuses by those “rebel” forces.

After some discussion the United States finally agreed to a resolution on the bombing but only if it stated that the Syrian government caused the Al-Qaeda bombing of its civilians by refusing to surrender Damascus to the Islamist rebels. That idea was vetoed by the Russians who said the United States was practicing a “double standard;” Russia asked why resolutions condemning bombings in Afghanistan don’t blame the presence of the United States Army.

Here is the bottom line for Obama: If Islamists setting off car bombs are supported by the United States, there will be no condemnation. Is this a double standard? Of course, but the USA and the British are acting as proxies for the Saudi and Qatar governments in the Syria war.

Saudi Arabia and Qatar have invested over $2 billion in the war against the secular government in Syria. By destroying the government in Syria, they hope to block a natural gas pipeline from Libya to Europe through Syria that would cut revenue to Qatar and Saudi Arabia by billions of dollars a year.  At the same time, installing a “moderate” Muslim Brotherhood government, which was the original goal, would reduce the influence in the region by Saudi Arabia’s main antagonist, which is Iran.

The United States wants the “omelet” of a curtailed Iran as well, because that nation is viewed as a “main enemy” of the United States. As one State Department official said, “To make an omelet you have to break eggs.” Unfortunately the broken eggs in Syria are the Christians, who will be forced to live under a Sharia government if the Saudi Arabia financed jihadists win.

The vast majority of car bombs detonated by the “rebels” in Aleppo, Syria are in Christian neighborhoods. The Christian families, who have lived in Aleppo since the time of Christ, live mostly in the “old city” which is under constant attack by the jihadists supported by the United States and the European Union.

Catholic priests and nuns cannot wear their habits in the streets because they are targeted by snipers supplied with modern British sniper rifles. This is the reality of Syria today.

Obama sees no Saudi evil – Two full weeks after I ran the news on our two Facebook pages, Fox News finally picked up the story of the arrest of 53 Ethiopian Christians for praying in a private home in Saudi Arabia.

Saudi Arabia’s notorious religious police, known as the mutawa, charged into a private prayer meeting of at least 53 Ethiopian Christian workers this month, arresting them for merely practicing their faith.

The arrests came in the coastal town of Dammam, the capital of a wealthy oil province in eastern Saudi Arabia. Three of the Christian leaders, all women, were charged with seeking to convert Muslims to Christianity.

Arresting Christian guest workers in Saudi Arabia is a common event, and in jail their treatment is horrendous, particularly if they are African. For example, during Advent of 2011, the mutawa stormed a prayer meeting at a private home in the Red Sea city of Jeddah, arresting 29 women and six men for more than seven months. The men were barbarically beaten and the women were subjected to torture of a sexually intrusive nature.  There was an outcry by some on Capitol Hill, but not from the White House.

Nina Shea, the director of the Washington-based Hudson Institute’s Center for Religious Freedom, told FoxNews.com that the arrests in Dammam are “part of Saudi Arabia’s policy to ban non-Muslim houses of worship and actually hunt down Christians in private homes.”

In a FoxNews.com story that ran several weeks after the arrest, Nina Shea said,“the U.S. government does not raise its voice in protest”as part of the U.S.-Saudi strategic partnership. She added that the failure to push the Saudis to change their intolerant behavior “has taken the backseat to oil and the war on terror. The Saudis are playing a double game — cooperating with the war on terror and working against the war on terror campaign.”

I have worked with Nina Shea on various religious freedom projects in the past. She served for several years on the United States Commission on International Religious Freedom and is the author of In the Lion’s Den: A Shocking Account of Persecution and Martyrdom of Christians Today and How We Should Respond.

So far only one lawmaker has spoken up about the latest abuse of Christians by the Saudi Arabia monarchy/dictatorship. Congressman Jeff Fortenberry (R-Neb) who sits on the Caucus on Religious Minorities in the Middle East said, “Nations that wish to be a part of the responsible nations of the world must see the protection of religious freedom and the principles of reason as an essential part of the duty of the state.”

The contrast to ignoring the persecution, even torture, of Christians by our Saudi “ally” is the condemnation of Russia by the Obama Administration and many Senators of both parties when members of a feminist, anarchist punk rock band called Pussy Riot were arrested for demonstrating in a rather foul performance inside Christ the King Orthodox Church in Moscow.

According to the Obama Administration and the mainstream press this “free expression” should be allowed by Russia, but arresting Christians in Saudi Arabia for praying in a private home seems not a problem at all.  The liberal politicians and liberal press in the United States will stand up to defend the radical feminist band’s defiling of a sacred place, but have no desire to defend Christians who are tortured by the Islamic government of Saudi Arabia.

All the members of the punk rock band were charged with “hooliganism motivated by religious hatred” because of their anti-church, anti-government performance at the altar of Christ the King Church, and two leaders were sentenced to two years in jail.

Meanwhile, Christians in Egypt, Pakistan, Iran, Saudi Arabia and other Muslim dominated nations have been sentenced to life prison terms and even death for blasphemy — with no liberal outrage manifested in any Western nation. Indeed the liberal press often casts the blame on the victims of Islamic violence, as was the case with the attempted assassination this year of Lars Hedegaard the head of the Danish Free Press Society in Europe.

For liberals in the West there will be a price to pay for their support of Islamic suppression of human rights. As Islam overtakes Europe, the radical left will be the first to pay with their heads for their support of drugs, homosexuality, prostitution and promiscuity — that is if God does not render judgment on them first.

Congressmen demand action on Iranian pastor – My good friend Congressman Trent Franks (R-AZ) is the chairman of the International Religious Freedom Caucus and one of the few voices on Capitol Hill fighting to protect religious minorities in Islamic dominated nations.

Congressman Franks recently authored a letter calling on the new Secretary of State, John Kerry, to “exhaust every possible option to secure U.S. citizen Saeed Abedini’s release from Iran.” Franks was able to obtain the signatures of 80 other congressmen on the letter.

Saeed Abedini is a convert from Islam who is now a Christian pastor. He studied in the United States, became a citizen and married an American. He has three children. Abedini made several trips to Iran in recent years to work with Christian pastors there, but the Islamic Republic has repeatedly harassed him. Pastor Abedini was arrested on his last trip to Iran and is being tortured in one of Iran’s most notorious prisons after a mock trial on charges of blasphemy.

Congressman Franks and other members of Congress are demanding the Obama Administration find its voice when it comes to defending Pastor Abedini’s religious freedom. I applaud their efforts, but I won’t hold my breath waiting for Obama or Kerry to stand up and help any Christian pastor persecuted in any Islamic dominated nation. Please contact your congressman and Senators and ask them to help Congressman Franks free Pastor Abedini.

The Religious Freedom Coalition is working on other issues on Capitol Hill as well, but there is simply not room in this letter to report on them this month. Almost daily I post updates at two of the Facebook pages I edit. Check Facebook.com/ReligiousFreedomCoalition.org and Facebook.com/ShariaFreeUSA. All of the Chairman’s Reports as well as my weekly updates from Capitol Hill are located at ReligiousFreedomCoalition.org. At that site there is a rotating globe that shows the location of visitors our main site has had since December, 2012. You may be surprised, as we have visits from every continent except Antarctica.