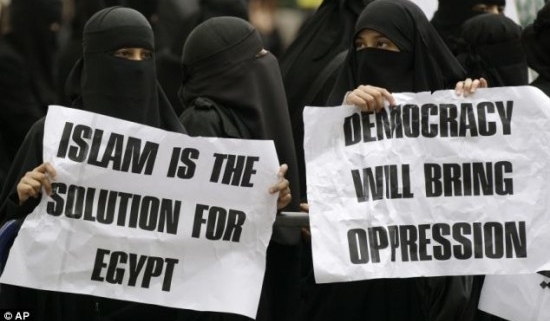 ABOUT EGYPT MR. PRESIDENT – The number of dead and injured Christians in Egypt grows each day. Apparently the “democratic revolution” that Barack Obama and Hillary Clinton supported in that nation just does not include any human rights forChristians. Hosni Mubarak was a dictator, but he was a secular dictator. Without that secular presence the imams of Egypt are directing the wrath of their faithful virtually every Friday toward the minority Christian population. What do we hear from the White House or the State Department about these murderous attacks on Christians? NOTHING!


ABOUT DEMOCRACY MR. PRESIDENT – President Barack Obama has a very strange view of democracy, as do all liberals. Obama’s definition of democracy goes something like this: “If we win an election, we pass whatever laws we want to and we enforce them. If conservatives win the election, we use force and mass demonstrations to stop them from passing and enforcing laws.” In the liberal mind any law that is passed which they do not like, even if it is passed by a majority of the people at the ballot box, is fascist in nature; therefore, stopping its enforcement by any means, even by force, is justified.
THE CONGRESS
ISLAMIC TERROR HEARING – Congressman Peter King, the chairman of the Homeland Security Committee, began hearings this week on the “radicalization” of American Muslims. The goal of the hearings is to determine the cause of the dozens of arrests during the last two years of American Muslims who were planning terror attacks. The liberal media, including the New York Times, the Washington Post, CNN and NBC, have whipped up such hysteria and hatred against Congressman King because of his honesty on the subject of Islam, that 24 hour security had to be put in place to protect him and his family. Yesterday I wrote a letter to Congressman King thanking him for shining a light on extremism in American mosques. My letter to Congressman King
RELIGION AND CULTURE
WISCONSIN’S FASCIST LEGISLATORS – The liberals’ definition of a fascist is a democraticly elected official who will not bow to the wishes of a violent mob. Last November the people of Wisconsin elected a governor and legislators who said, in advance, that they would reduce the debt of the state by cutting union benefits and wages of state employees. Unwilling to accept the election results, the left has staged mass disturbances, vandalized state property and made death threats against the governor and Republican legislators. While the media painted the peaceful gatherings of Tea Party members as dangerous, the violence of union members in Wisconsin for the most part goes unreported.
SCHOOL BACKS DOWN, ALLOWS TEN COMMANDMENTS – On February 23, Jacob Agee and other students who are members of the Fellowship of Christian Athletes posted copies of the Ten Commandments on their assigned lockers. Very quickly thereafter, Principal Barry Hollandsworth and Assistant Principal Tony Deibler removed each copy. The Liberty Counsel then sent a letter to the Floyd County High School administration, requesting the reversal of their censorship of religious material posted by school students on the front of the students’ own lockers. Liberty Counsel gave school officials two weeks to reverse course or face a federal lawsuit. As a result, Floyd County High School officials did reverse course and will now allow students to display the Ten Commandments on their own lockers. Read more
NO 911 MOSQUE!
IMAM FEISAL RAUF RALLIES HIS ATHEIST TROOPS – On Sunday, March 6th, Imam Feisal Rauf and his wife, Daisy Khan, rallied together leftwing nuts of all kinds, including atheists, for what was billed as an “I am a Muslim, too” protest against Congressman Peter King’s efforts to investigative radical Islam. Imam Rauf, who was at one time the lead publicist for the Ground Zero mosque, refuses to refer to the Jihad attack on 9-11 as terrorism. He spoke to a crowd of what the NY Times claimed was about 300 people. Read more at no911mosque.org
NO 911 MOSQUE – Visit the RFC site dedicated to the Ground Zero mosque controversy at www.no911mosque.org
NTERNATIONAL
MORE ATTACKS ON EGYPTIAN CHRISTIANS – Violence against Christian Copts in Egypt escalated this week. A mob of 15,000 armed Muslims using Molotov cocktails, guns, and clubs, attacked Christians just outside Cairo. The Egyptian army, rather than restoring order, joined in the attack, shooting the Copts with live ammunition. So far ten Christians are known dead with hundreds injured. This attack came after Christians protested earlier attacks and church burnings in Christian neighborhoods. (See below)
MAN MURDERED BECAUSE HE REFUSED TO MURDER DAUGHTER – This is Islam, this is a true story. Last week the father of a Muslim woman was killed by his cousin because he refused to kill his daughter to preserve the family’s honor. (The daughter had a romantic relationship with a Christian man). The woman’s brother then killed the cousin to avenge the death of the father. Got that so far? Imams then blamed both murders committed by Muslims on Christians. Hundreds of Muslims then attacked a Christian village killing innocent people, burning down homes and churches. When Christians near Cairo protested the attacks on the village and the murder of Christians they were attacked by the army (see above.) Read more
EGYPT, CHRISTIANS, REVOLUTION AND PERSECUTION – I urge you to read this full background report on the situation in Egypt at Family Security Matters.
CHRISTIAN INTERNET STORE