by Bob Unruh (From WND.COM)

Prayer is needed in America’s schools, not just for the moral teachings, but because it represents the authority of God, according to William Murray, son of the nation’s most famous atheist, Madalyn Murray O’Hair.

“Prayer in the schools 50 years ago had little to do with morality and a lot to do with authority. The speaker of the House of Representatives, the second most powerful man in America, has the words ‘In God We Trust’ engraved over his chair in the House Chamber,” said Murray, the author of “My Life Without God.”

“This is more than the national motto; it was meant to be the real source of authority for our government. If rights come from God they cannot be taken away, but if they come from government, a simple majority vote can void those rights,” he continued. “Fifty years ago prayer and Bible reading represented the authority of God over the school, the teachers and the students. Bowing of heads in the morning for prayer was much more about surrendering to the authority of God than about learning ‘morals.’

Murray was reacting to a promotion for a new book called “Revitalizing Christianity” by Charlie Webster, who runs New Century Ministries.

His goal, according to his web site, is to reveal the real Christianity, not the system associated with “boring sermons and rituals … fluffy pep rallies.”

Read William Murray’s reaction to the idea that Christians should give up and acknowledge secularists have won in schools.

“New Century Ministries started in 2000 with a goal to help Christians find out more about the exciting and motivating message of Christianity that far too many Christians do not see,” the website explains.

But a promotion dispatched yesterday by the Florida-based News and Experts on behalf of the book said “This summer marks 50 years since the Supreme Court ruling that effectively banned official prayers in public schools. Ever since, wave after wave of proposed bills and amendments have sought to undo that ruling – or at least circumvent it.”

The promotion continued, “And now, a former minister says prayer as government-sanctioned religious training never had a place in public school classrooms anyway.”

Sorry Charlie, Murray writes in a commentary on the subject, “secularization does not ‘revitalize Christianity.’”

“It seems Webster contends that since America is now a ‘pluralistic’ society, the reading or teaching of ‘sacred writings’ in schools should not be done. He urges Christians to just accept the 50-year-old Supreme Court decision that removed prayer and Bible reading from America’s public schools.”

Murray said, “If rights come from God they cannot be taken away, but if they come from government, a simple majority vote can void those rights.” 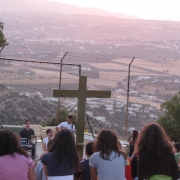