$400 OFF PER COUPLE ON ISRAEL FACT FINDING TOUR – A once in a lifetime mission led by William J. Murray, William Federer and Frank Gaffney, all three experts on Israel and Islamic affairs. Not a standard “tour,” the mission includes visits to settlements and military bases plus evening panels. Limited time for $400 discount! Read more Obama’s Prophet – To non Christians Jesus is simply Jesus, he is not the Savior. To non Muslims Mohamed is simply Mohammed, he is not the Prophet. Only Christians call Jesus “the Savior” and only Muslims call Mohammed “the Prophet.” These were President Barack Hussein Obama’s words at the United Nations this week: “The future must not belong to those who slander the prophet of Islam.” In the next sentence he referred to Jesus Christ without using the term Savior. Many found this very odd, particularly in light of the United States backing a UN resolution supporting blasphemy laws, a resolution all previous American administrations have opposed.
Obama ordered arrest of film maker – Federal authorities have jailed without bail the individual who made the anti-Islam film clip that Obama and his Administration falsely claimed caused the murder of one of our ambassadors. Federal authorities claim the man was arrested not for the video, but for violating his parole in a bank fraud case dating back to the year 2000. If the arrest was not because of the video, why did prosecutors in demanding he be held without bail, use language nearly identical to Obama’s concerning the film clip. The Wall Street Journal has called Mr. Nakoula’s jailing a First Amendment affront. Read more
Congress
Resolution Reaffirming Importance of Faith and Supporting Free Exercise of Religion – Rep. Stephen Fincher, a Member of the Prayer Caucus, recently introduced H.Res.789 to reaffirm the importance of faith in the lives of Americans and to support the free exercise of religion. The measure recognizes the important role that Judeo-Christian principles played in the development of our nation, and rejects efforts to remove religious faith from the public square.
Group Letter on Religious Freedom – The Religious Freedom Coalition and numerous other groups wrote a group letter to Congressman Robert E. Andrews (D-NJ) asking for an apology and for a clarification of his position on the NLRB’s violations of the First Amendment and harassment of religious educators. Read more.
Senate candidate arrest record – Congressman Todd Akin, who is running for the Senate in Missouri, was arrested 25 years ago, just as his Democrat opponent claims. However, his arrest record is getting him more support not less. When a left wing reporter asked him if he had ever been arrested he proudly responded, “Yeah, well, certainly. Probably about 25 years ago or so I was involved in some peaceful protests. As I’ve made very clear I don’t apologize for being pro-life. I stand up for the things I believe in.”
Religion and Culture
Bloomberg has 275 sq ft for you! – Mayor Bloomberg, who has just banned anything larger than a 16 oz drink at a restaurant, now wants people to live in a 275 square foot apartment, an area half the size of a subway car. He says single people need the apartments in New York and they will be cheap at $2,000 a month. Mayor Bloomberg’s current mansion, which is just one of eleven homes he owns, including one in Bermuda, is reportedly 41 times larger than the proposed apartments. Read more
International
UN chief Ban Ki-moon wants to ban free speech – Shortly after President Barack Obama declared at the United Nations that “The future must not belong to those who slander the prophet of Islam,” the Secretary General took to the podium to denounce freedom of speech. In remarks clearly designed to back Islamic blasphemy laws Secretary Ban made this remark about freedom of speech: ” When some people use this freedom of expression to provoke or humiliate some others’ values and beliefs, then this cannot be protected in such a way.” We pay this jerk’s excessive salary with taxpayer dollars. Read more
Sweden: Jewish Center bombed – On Friday, the Jewish Center in Malmo, Sweden was bombed. Malmo Jews say they are routinely harassed in the city of 300,000 residents, which has a large immigrant community from the Middle East. Earlier this year, a rabbi was physically assaulted and in 2010, a group of Jews were attacked by Swedish Muslims during a peaceful protest in support of Israel. Read more
Spain: Pope must apologize for Christians freeing Spain from Muslim invaders – A communique from the International Union of Muslim Scholars (IUMS) – The “moderate” scholars loved by Barack Obama and Hillary Clinton declared that the Pope must apologize for the Christian victory over the blood thirsty Islamic invaders who enslaved Spain for hundreds of years. Read more
Morocco: Force Arabic on European schools – The Moroccan minister Abdellatif Mâazouz is pressing governments in Europe to make the teaching of Arabic a standard part of the European school curriculum. Morocco is one of those “moderate” Islamic nations that liberals love to point to.
Australia: Eight year old girl calls for jihad – Eight-year-old Ruqaya yesterday was put on stage at a congress of Islamic fundamendalists in Sydney to espouse her love for jihad. Addressing a 600-strong crowd at the Australian chapter of Hizb ut-Tahrir in Bankstown in the city’s west, the young girl urged all Muslim youth to fight for the restoration of the Islamic caliphate, a single global government for all Muslims established under strict sharia law. Read more
UK: Video of UK Muslims: “Bomb England”, “Free Palestine” and “White People Die In Hell.” recorded by a well know BBC broadcaster, probably without BBC permission.

New Chairman’s Report –Now available, the September 14th, 2012 edition of William J. Murray’s Chairman’s’ Report. This issue contains several stories dealing with the current election cycle. Read it here!
Constitution or Sharia DVD – This is the complete set of DVD’s from the November 11, 2011 Constitution or Sharia conference in Nashville, Tennessee. The Constitution or Sharia: Preserving Freedom Conference was the first true national conference on Sharia and the Islamization of America sponsored by major freedom oriented organizations! It was not just another educational conference. How to deal with and stop implementation of Sharia law in the United states was outlined by speakers and in panels. Order today 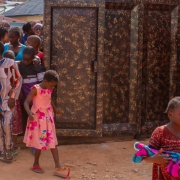 Children at home in our new orphanage!
1 reply