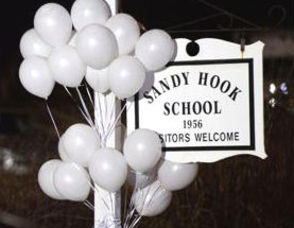 In this issue: Obama and the Newtown massacre / A “commission” of violence? / RINO to run Pentagon? / Anti-war activist to take over State Department / Anti-tax king Grover Norquist calls to raise taxes / The AMT is about to bite taxpayers / Churches not preaching about Hell caused Newtown shootings? / CAIR leaders calls for destruction of Israel / Muslims kill nine giving out polio vaccine / Child killer Mohammed Merah a “hero” of Islam / Thai Muslims hunt Buddhist to kill
The Presidency
The President and the Newton massacre – America is a violent society and if you don’t believe that just watch the prime time TV shows each evening that depict gruesome murders and masked militarized police invading homes. (My personal favorite was a real-life show in which over twenty heavily armed masked police invaded the three room house of an unarmed obese female shoplifter.) Human bodies are dissected on detective shows as people watch and eat sandwiches. There is virtually no respect for humanity in our national media and the liberals are all more concerned about tadpoles that may go extinct than feeding poor kids. In response President Obama asks “why” the Newtown shootings occurred and appointed a commission to look into the “problem.” The problem is obvious: The problem is liberal public schools that teach situational ethics and no moral absolutes. Read William J Murray’s column
RINO to run Pentagon? – Barack Hussein Obama, a Muslim Brotherhood sympathizer, is expected to nominate “Republican” former Nebraska Senator Chuck Hagel to run the Pentagon after Secretary of Defense Leon Panetta leaves. Hagel once advised the Republican Party leadership that it should have a “big tent” policy that avoids social conservative issues. According to Hagel: “The Republican Party “shouldn’t be a philosophy about morals.” Hagel has supported by a wide range of anti-Israel forces around the world. Among those are radical Islamists who recently appeared on Press TV, Iran’s official government television network to praise Hagel. Read more
Senator John Kerry replaces Hillary – President Barack Hussein Obama nominated Sen. John Kerry as his next secretary of state, saying Kerry’s entire life “has prepared him for this role.” I wonder if getting “prepared” included demonstrations against our armed services during the Vietnam War and tossing the citations he received while serving in the trash?
Congress

The Norquist factor – “Conservative” icon Grover Norquist, who agrees with George Soros on just about everything except taxes, endorsed Speaker John Beohner’s plan to raise taxes on those making over $1 million a year. The Boehner tax bill, called Plan B, was pulled from the floor because Democrats didn’t think it raised taxes far enough and Tea Party Republicans thought it raised taxes too much. Oddly Norquist just a few days earlier threatened to campaign against Republicans who “violated” his ATR tax pledge which he then violated himself. We are witnessing the self-destruction of a political party that doesn’t have a clue as to who voted them into office. Read more
Alternative Minimum Tax – No one is talking on Capitol Hill about the AMT which will increase taxes on the average family by more than $4,000 in 2013. The tax set up in the 19060’s to stop the “wealthy” from paying no taxes by using deductions has never been set to adjust for inflation. Because Congress took no action to raise the income trigger in 2012, as it has each year in the past, those earning as little as 33,750 will be forced to pay higher taxes.
Religion and Culture

The Newtown school massacre – The mainstream media immediately blamed guns and mental illness for the attack that killed so many young children. ABC nightly news asserted that 20% of children in the United States are mentally ill and that huge sums of money must be directed to help them. (ABC News stated that 23% of American women and 17% of American men are mentally ill as well.) It is ridiculous to state that one in five American children is mentally ill, but it would be right to state that more than one out of five children has no exposure to Christian teachings or morals and that is the real problem. I wrote a very lengthy column at WND.COM in which I place a lot of the blame on the churches of America for failing to preach the wrath of God and the existence of Hell. I explained the column and my positions on Mike Huckabee’s national radio show. Listen to my segment with Huckabee here.
CAIR leader supports destruction of Israel – Cyrus McGoldrick is the Civil Rights Manager and spokesman for the New York chapter of the Council on American-Islamic Relations or CAIR in New York. At his Facebook page he repeated has used the slogan “From the river to the sea, Palestine will be free,” which of course means the destruction of Israel and the death of all the Jews there. During the November missile attacks by HAMAS on Israel he set up a link at a CAIR site to transfer funds to a terrorist organization. Any criticism of his behavior is, of course, Islamophobia. Read more
International
Pakistan: Nine medical workers killed by Taliban – A ninth medical worker was killed during a wave of attacks on polio-vaccination teams. All have died at the hands of the Muslim Taliban since December 17. All have been killed while distributing free polio vaccine drops. Five of the nine health workers killed were women.
France: Victimhood caused Mohammed Merah to kill kids – “Mohammed Merah, you know, he’s a hero, he’s a martyr of Islam.” That is what the cold blooded killing who shot Jewish kids in the face is called in his olde neighborhood. The New York Times investigated the “whys” and discovered it was not Islam but poverty. The liberal mind is just amazing.Read more
Thailand: Muslims hunt down Buddhist to kill – According to the liberal media in the West the only reason Muslims kill Christians and Jews in because of the existence of Israel. Why then are Muslims hunting down and killing Buddhists? Angry they could not find a Buddhist to kill at a government office the Muslims burned it down. Read more
More from the Religious Freedom Coalition

New Chairman’s Report – Now available, the December 6th, 2012 edition of the RFC Chairman’s Report is now online. In the current issue: A politician who robs Peter to pay Paul can always count on the vote of Paul. The new central planning machine in Washington will run over the GOP / Obama has a vision of an American utopia not of equal opportunity, but of centrally planned equal outcomes / Jihadists target Christians in Syria / Saudi Arabia financing war on Syria / Obama’s lesbian wedding at West Point / Benjamin Franklin: “When the people find that they can vote themselves money that will herald the end of the republic.”
Constitution or Sharia DVD – This is the complete set of DVD’s from the November 11, 2011 Constitution or Sharia conference in Nashville, Tennessee. The Constitution or Sharia: Preserving Freedom Conference was the first true national conference on Sharia and the Islamization of America sponsored by major freedom oriented organizations! It was not just another educational conference. How to deal with and stop implementation of Sharia law in the United states was outlined by speakers and in panels. Order today
Books by William J Murray here
https://religiousfreedomcoalition.org/wp-content/uploads/2012/12/sandyhookschool.jpg 228 294 Air Spark https://religiousfreedomcoalition.org/wp-content/uploads/2020/03/RFCFinal.jpg Air Spark2012-12-21 15:37:562012-12-21 15:37:56Report From Washington - December 21st, 2012

The Magna Carta:  Celebrating Our foundation of Freedom
2 replies