s a petition demanding that congressmen speak out against the arrest and brutal treatment of Christian quest workers in Saudi Arabia. In February 53 more Ethiopian Christians were arrested as they held a prayer meeting at a private home. In the past Christians working in Saudi Arabia have been tortured. Christian women arrested have been subjected to sexual tortures. The Religious Freedom Coalition has arranged through FaxCongress.com for the petition to be faxed free of charge to your congressman asking him to speak up against the arrest and torture of Christians in Saudi Arabia. By entering your zip code in the form provided at FaxCongress.com the petition will go to your congressman with your name at the bottom.

This petition is to respectfully ask you to join Congressman Jeff Fortenberry in speaking out against the Kingdom of Saudi Arabia for its brutal treatment of Christians, and especially those who are African. In February, 53 Ethiopians attending a prayer and Bible study meeting were arrested and jailed when Saudi religious police stormed a private home. Please use your influence to call for their release, because they are in great danger of torture and sexual abuse while in jail. That was the experience of another group of 29 Ethiopians who were released last year after months of abuse in jail, for the same “offense” – private Christian worship.

Of course the Saudi Kingdom is so intolerant that it has no known Christian citizens, yet there are many Christians among its over six million guest workers, and they are persecuted for their faith. Such radical intolerance will not stay within the borders of Saudi Arabia because the country has so much influence in the world. Recently their Grand Mufti called for all Christian churches to be destroyed in the whole Arabian Peninsula. And let us not forget that Saudi Arabia was the birthplace of 15 of the 19 hijackers of 9-11 and also of Osama Bin Laden.

For Congress to remain silent and ignore cases in which people are hunted down in their homes just for private worship, will only make the situation more dangerous by encouraging the religious police in Saudi Arabia. Please speak out for religious freedom and human rights. Call for a Resolution condemning this Saudi Arabian intolerance and violence toward Christians.

Click here to go to FaxCongress.com to fax your copy of the petition to your congressman today.

Read more about these arrests of Christians here! And PLEASE share the video below with your friends and family! 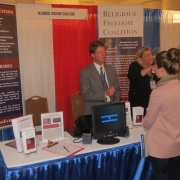 Stop support for terrorists in Syria