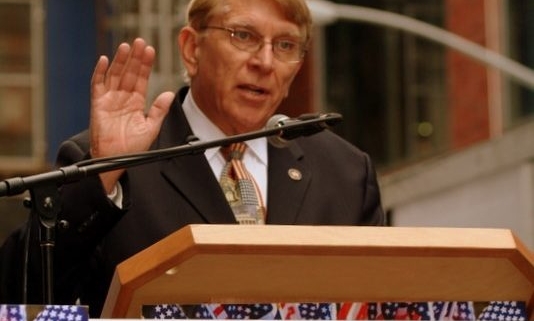 Note: The commentary is running front page news at WND.COM as of 3/13/13

Today I received a series of video clips from Russia and Turkey showing the progress of the “rebel” army in Syria, which is supported by the European Union, the United States and NATO.

In the first three-minute video clip, two men in civilian clothes, and with their hands and feet bound, were dragged to the edge of a trench. With victorious music playing in the background and the encouragement of a cameraman speaking Turkish, one could see the two men shudder as their brains were blown out, one at a time. As the bullets were fired, a cheer went up in Russian from the Chechnya fighters, and the flag of al-Qaida was waved back and forth for the cameraman. As each victim was shot, his body, with hands and feet still tied, was kicked into the trench. As the camera panned to the trench, headless bodies of civilian men could be seen within it. (The beheading was edited from this copy of video [warning: graphic footage]).

None of the dead men had a visible beard, which indicates that all of them had probably been either Christians or secularists. In Syria, as in other Middle Eastern nations, for the most part only the Muslim men have beards.

I was not watching secretly made videos of the murders, but rather recruitment videos for jihad fighters to come to Syria and help overthrow the secular government of Syria. Showing the murder and torture of men who are bound and helpless while being shot or beheaded is apparently a good jihadist recruitment tool.

After watching the Russian-speaking jihadists kill civilians, I watched the next video of an American jihadist, an Army veteran, brag of his exploits of murder and mayhem with an al-Qaida flag behind him. Then I moved on to a third video – not public – of beheadings, again of apparent civilians in plain clothes and without beards. But this time the killers consisted of a Libyan brigade of jihadists. In the fourth video no one died, but it contained graphic beatings of women who were referred to as “Assad’s whores.” I had seen such tapes before from the Mujahideen, in the 1980s. Those, too, were recruitment videos, but the purpose then was to raise an Islamist army to fight the Soviet Union in Afghanistan.

Of course, the NATO nations only support the “moderate, democratic” rebels who are fighting with the jihadists to topple the secular government of Syria. But don’t look for a prison camp where these “moderate rebels” hold enemy prisoners. No prisoners are taken in this war, except by the “totalitarian” government of Syria.

On the “rebel” side of the battle lines in Syria, the black flag of jihad and the flag of al-Qaida fly visibly everywhere. Western media have to go to great lengths to shoot video or take photos that do not show the jihadist flags. When that is not possible, the flags are simply not explained in the story. The media do not want to expose the fact that Europe and the United States have switched sides in the War on Terror so that a strategic “omelet” can be made – more on the omelet later.

Incredibly, less than 12 years after al-Qaida fighters from Saudi Arabia flew civilian aircraft into two World Trade Center buildings and the Pentagon, the United States is supporting an al-Qaida-backed insurgency in Syria, the goal of which is to create an Islamic state free of Christians. In Washington, D.C., there is bipartisan support for the fighters waging the war to rid Syria of its secular government. Not only does the Democratic president, Barack Obama, support the Islamic “rebels,” but so do hawkish Republican senators such as John McCain and Lindsay Graham.

The trend did not start with Barack Obama, as much as some would like to put the entire blame on him for the Arab Spring fiasco that has become an Islamist Winter. President George W. Bush set one precedent by invading the secular nation of Iraq and sending hundreds of thousands of Christians who had lived there safely and prosperously into chaos, death and refugee status.

To complete the work of Bush Obama is cleansing the remainder of the Middle East of secular governments. Those in Tunisia, Egypt and Libya are gone; all have been replaced with repressive Islamist states masquerading as democracies, and all of them support the goals of Saudi Arabia in Islamizing the world.

Not too long ago an unnamed State Department official (probably a student of Lenin) said, “To make an omelet you have to break eggs, and in Syria the Christians are the eggs.” The omelet in this case is of a strategic nature; it is the isolation of Iran, which is considered a “main enemy” of the United States and Europe. Thus any friend of Iran (like Syria) is an enemy of the United States. The “main enemy” strategy is a holdover from the Cold War, a strategy that helped create the tragedy of 9/11.

The United States during the Clinton and Reagan administrations armed the predecessor of al-Qaida in Afghanistan to help defeat the occupation of that nation by our “main enemy” at the time, the Soviet Union. During the Reagan era, the Mujahideen were viewed as friends of the United States and were even glorified in the James Bond movie “The Living Daylights.” Indeed they were visitors to the White House, and I was personally at a reception with Mujahideen “freedom fighters” and then-Vice President George H.W. Bush.

Murder, including the beheadings of Soviet soldiers and civilians by the Mujahideen, was acceptable to the United States and its NATO partners at the time. At one point a platoon of captured Russian soldiers had their heads removed and placed on stakes without a word of complaint from then-Secretary of Defense Caspar Weinberger or anyone else in the Reagan administration or the Congress. I saw those videotapes at the time, as chairman of Freedom’s Friends in the 1980s. They were not much different from those on LiveLeaks, MRC and YouTube today showing the jihadist fighters in Syria.

The United States supported terrorist jihadists in the 1980s, long before 9/11, just as easily at it does today – so long as the purpose was the strategic aim of defeating a “main enemy.”

The problem with supporting mass murderers and terrorists in Afghanistan in the 1980s, and of supporting them in Syria today, is that they are not going to reform when America changes course and goes on to a new “main enemy.” Al-Qaida, the Mujahideen, or whatever will be the name of the Islamist group in the future, will always keep their goal the same – to kill infidels. When not killing infidels on behalf of the United States, they will simply kill infidels on their own, including, of course, American infidels.

Jimmy Carter, Ronald Reagan, Bill Clinton, George W. Bush and Barack Obama shared a core failing of not understanding the nature of the Islamists. All these leaders believed they were dealing with some level of rationality, which they were not. The Islamists are not rational and pragmatic in their thinking. Signing a treaty with France to defend Europe from the Soviets does not have the same outcome as arming and training Islamists, as we learned on 9/11. American leaders should have realized the defect in their logic of supporting jihadists after two attacks on the World Trade Center, numerous embassy bombings and the sinking of a naval vessel during the 20 or so year period after the Soviet retreat from Afghanistan.

The videos showing the murders of civilians and the brutal treatment of women by our “allies” in the war against Syria’s secular government are a testimony to the fact that the lesson has not been learned. The current strategic thinking against the “main enemy” in Iran has led to the consolidation of an Islamist power base in the Middle East that threatens world peace. For the sake of world peace and the survival of Christians and other religious minorities in the Middle East, the United States and the EU should abandon picking one Islamist group of infidel killers over the other and instead support the secularization of the region.

William J. Murray is the chairman of the Washington, D.C.-based Religious Freedom Coalition and the author of seven books.

Nigeria – Much accomplished in a very dangerous situation
3 replies