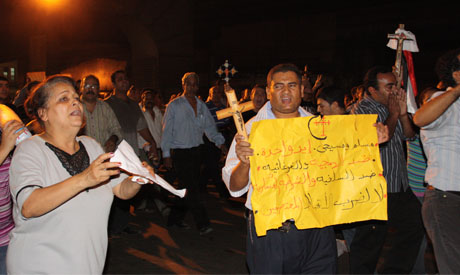 This article first appeared in the Boston Jewish Advocate.

Why is the West so shamefully silent in the face of the onslaught against Christian peoples and communities throughout the Islamic realm?

If the reasons for this are not understood – and if the silence continues – we are almost sure to witness bloody religious/ethnic “cleansings,” if not actual genocides.

The Syrian Christians in Damascus, whose church has just been bombed by anti-Bashar al-Assad rebels, know their community will be wiped out if Assad is toppled. The Christian Copts in Egypt can see what the Salafists have in store for them as the Muslim Brotherhood assumes more and more control. The Copts’ daughters are already being raped, their priests beaten, their churches set aflame. From Nigeria to Malaysia, from Pakistan to Iraq, from Uzbekistan to Tanzania, Christians are arrested, harassed and threatened. Murder is in the air.

Obama has not spoken out. But neither have the “human rights” community and other “caring and compassionate” people who endlessly talk about social justice. And sadly, neither have Christian pastors and priests. Why are both the left and the Christians abandoning these people to their fate? I can see 10 reasons.

1. Crime by non-Westerners distracts from the left’s message.

For many Western progressives, guilt over past Western crimes of colonialism and slavery narrows their focus to horrors committed by Westerners. This enables them to cast themselves as “the good whites” and be exonerated of Western sin. Apartheid committed by South African whites moved them greatly; to protest Arab/Muslim attacks today on Christians would distract from their message and blunt their purpose.

2. Christians cannot be seen as victims.

Progressives perseverate on the notion that Christian missionaries were an arm of Western colonialists, and tricked Asian and African natives with religious mumbo jumbo. Also uppermost in their minds: Christians allowed – and Christian teachings abetted – Hitler’s genocide of Europe’s Jews. The progressives’ history, however, omits centuries of Islamic conquest (by the sword, not the work of missionaries), slaughter, and enslavement of pagans and subjugation of Jewish and Christian communities – which, by the way, preceded Islam in Egypt and of course Israel. Few progressives ever understood that “the tragedy of Sudan” was a murderous anti-Christian (and anti-tribalist) jihad.

Apart from their incomplete and biased view of history, progressives have a PC/therapeutic view of peacemaking: Discussion of Islamist human-rights crimes is barred as “unhelpful” at best and “racist” at worst. To make peace, their theory goes, we must appease and not offend “the other,” and we must think of our adversaries as no different from ourselves. One should not describe cultures that wish only to dominate, encourage men to rape, and force others to reject their own religious faiths. In other words, progressives would object to reporting on what is happening to the Christians in the Muslim world.

4. Many progressives see themselves in a culture war with Christians.

Many progressives may not wish to help persecuted Christians in the Middle East and in Asia because they are at war with Western Christians here over such things as gay marriage, women’s clergy inequality, and abortion. Why help your “enemies?”

5. Ignorance, which is sometimes willful.

For the sake of peaceful relations, the media (see “progressives” above) fails to fully inform Christians about Christian suffering at the hands of Muslim radicals. Christian pastors, some of whom have been told by their Muslim “dialogue partners” that any such talk threatens to harm interfaith harmony here, opt for a similar silence. The Diocese of Worcester recently cancelled a talk on Christian persecution by renowned scholar Robert Spencer of JihadWatch.org for precisely that reason.

The Christian communities in the Islamic realm are effectively hostages. Popes and preachers have known for centuries that Western agitation for Christian rights under – and protection from – their Muslim overlords pose threats to the very lives of the people they wish to help.

Christians here don’t identify with other practitioners of their faith as “family” – in the way, for example, that Jews do. Recently, Christian students at Gordon College, a Christian school in Wenham, Massachusetts, explained to me that unlike the Jews who mobilized throughout all their communities when one Jew – Gilad Shallit – was kidnapped, Christians are not “a family like the Jews who all come from Abraham and who carry his blood.” (I suggested that the global jihad might cure them of this viewpoint – that their fate was tied now to all Christians.)

When the American Anti-Slavery Group organized mass American support for freeing the slaves of Sudan, our effort was helped immeasurably by escaped slaves who told their personal stories eloquently in English at American churches, synagogues and on campuses. Without such powerful voices here, awakening and mobilizing the Christians – and all Americans – will be much more difficult.

9. Christians cut off from their history.

In the American psyche, as Henry Ford suggested, “history is bunk.” Among American Christians there is not much interest in keeping foreign, ancient Christian communities alive, even the cradles of Christian civilization. In Bethlehem, Christians are disappearing at an alarming rate due to Arab/Islamist pressure, with no audible protest in the West.

Christian Zionists know more than most about Christian suffering under the Islamists. But, strange as it may seem to us Jews, they are motivated overwhelmingly by the duty they feel toward the Jewish people. They have not been convinced that mobilizing here for their own Christian brethren in the Middle East would do more for Israel (I believe it just might) than continuing to “just” be the amazing Zionists they are.

Eibner put it this way in his letter to President Obama: “At the Holocaust Museum, Mr. President, you repeated a truth of which American policymakers must never lose sight: “Preventing mass atrocities and genocide is a core national security interest and a core moral responsibility of the United States of America.”

Americans of all political stripes and religious denominations need to remind ourselves of whom we are – and ask ourselves whom we would be if we leave the Christians to what so clearly seems a terrible, terrible fate.

Charles Jacobs is President of Americans for Peace and Tolerance (www.peaceandtolerance.com)