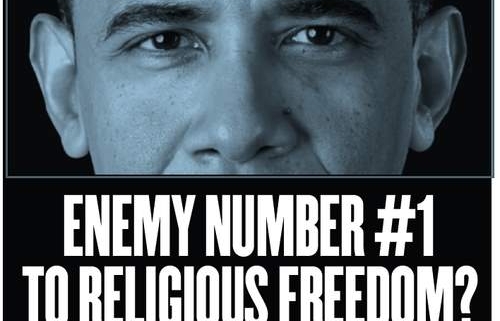 Obama’s War on Christians – The Obama Administration’s HHS Secretary Kathleen Sebelius has put a price on the head of any religious employer who dares to violate Obamacare’s abortion/sterilization/contraceptive mandate. Sebelius has issued thousands of pages of regulations for Obamacare. Among these regulations is a stiff penalty for any religious employer who refuses to supply abortion pills, sterilization services, and contraceptives. Read more
Congress
Dem Senator attacks pro-family group – World Congress of Families Managing Director Larry Jacobs said he was appalled that U.S. Senator Mark Kirk (R, Il.) bowed to the demands of sexual radicals and cancelled the use of the Dirksen Senate Office Building for a pro-family symposium. Read more
The Muslim congressman and the Nazi – Minnesota Congressman Keith Ellison will be on the roster with Obama’s Muslim advisor Dalia Mogahed and Ramy Jan, one of the founders of the Egyptian Nazi Party at an event in December in Georgetown. Read more
Religion and Culture
Liberals go nuts to stop anti-war nun – Mother Agnes was recently invited to a “Stop The War” conference, but liberals are going crazy over the invitation and have launched a vicious smear campaign against her. Mother Agnes is being vilified as an “Assad apologist,” “Assad’s favorite nun,” and called the Syrian equivalent of one of Adolf Hitler’s Nazi priests. Read more
International

Turkey: Wrong outcome for helping terrorists – A Turkish official has said, “This was not the outcome Turkey wanted,” according to a report in The Washington Post. This is one of the under statements of all times. Read more
Syria: Liberal news outlet says Christians are persecuted – The Daily Beast reported today that Syrian Christians who have fled from their homeland into Turkey, are telling reporters that soldiers with the Free Syrian Army are kidnapping, raping, and killing Christians who remain in Syria. The Free Syrian Army is the so-called “moderate” group supported by Obama and Senator John McCain. Read more
More from the Religious Freedom Coalition
New Chairman’s Report – Now available, the edition of the Chairman’s Report for the Religious Freedom Coalition. In this issue William J. Murray discusses the feral youth who congregate mostly in the coastal cities of the United States / A full report on the vandalism of the Ten Commandments monument on Capitol Hill is discussed. Chairman William Murray spoke at the re-dedication of the Ten Commandments. Read it here