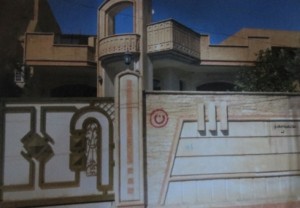 By RFC Chairman William J. Murray, who recently returned from the Middle East

This article was first published in WorldNetDaily. A 74-year-old man who would not give his name because of relatives still in Iraq showed me this picture of his home with the Arabic “nun” letter indicating it was a Christian home. The black writing at right says “Property of the Islamic State.” (Photo: Religious Freedom Coalition)

“I had a 600 square meter home in Mosul. now I live in 6 square meters,” said the 74-year-old science professor who now lives in what can best be described as a booth in a church basement. For those not familiar with metric, his 6,400 square foot home was stolen by the Islamic State, and he now lives in an area of about 64 square feet. He was not exaggerating. He had photos of his home with the Arabic letter “nun” painted on it, and over the door written “Property of the Islamic State.”

I looked at his new home in the basement of the Syrian Orthodox Church in Amman, Jordan, and it was clearly about 9-by-6 feet, about 10 square feet less than he had estimated in meters. The “walls,” which did not reach the ceiling, were veneer panels furnished by CARITAS, the Catholic relief agency. His door and the doors of the other homes were curtains made of light cotton fabric. Twenty Iraqi families, a total of 58 people, live in the basement with one common kitchen and one common bathroom. I estimated the entire basement at 25 by 50 feet, or around 1,250 square feet – for 58 people including adults and children.

During a nearly one-hour-long interview, I learned of the suffering these Christians had gone through to get this far in the journey to escape the brutality of the Islamic State, or ISIS. They told me that the invasion of Mosul in July 2014 consisted of 20 cars of Islamic State fighters, maybe 80 men in all, yet the heavily armed Iraqi army fled as they approached. Within days of taking over Mosul, more fighters arrived, and implementation of Shariah law was announced. The Christians were told to convert, give up your house or die. Some did convert, some did die, but the majority gave up their homes and ran for the Kurdish-held areas to the east.

Christians were allowed to take their cars, but not valuables. The Sunni Muslim rebels are thieves who stole all of the money, jewelry and even clothing of the Christians who chose to leave. The one hour or so drive to Irbil took 13 hours for the caravan of cars as they dodged conflicts. In Irbil they received no aid, but a few of the luckiest were able to receive airline tickets to fly to Amman, Jordan, and claim refugee status that had been granted by King Abdullah. But that refugee status did not come with permission to work or for children to attend Jordanian schools. The parents and children are idle in the basement of St. Ephraim’s Syriac Orthodox Church, reflecting upon their loss.

One of the churches they attended in Mosul has been turned into a mosque by the ISIS fighter, who also blew up St. George’s Church and a nunnery dating back 1,800 years. The fighters, they said, were 80 percent Iraqi and had the support of the Sunnis who lived in Mosul. These Christian Iraqis said it is their Sunni neighbors who now own their homes and their businesses. They said that only 20 percent of the Sunni fighters were foreign, unlike in Syria where well over 95 percent of the Islamic State fighters are from outside of that nation. The Iraqis from Mosul told me that the foreign fighters were mostly from Pakistan and Saudi Arabia, with a few that came from England, France, Germany, Russia and at least one from China.

Of course, these Christian families were not the only ones forced to hand over their property and leave. All Shiites had their homes and belongings stolen from them as well and were forced to flee with just the clothing on their backs. The hardest treatment, however, was reserved for the Christians. In all, 25,000 Christians are known to have fled Mosul in July. At the time of the U.S.-led invasion in 2003, Christians numbered 60,000 in that city.

When I asked the assembled group if they would ever consider returning to their homeland where their families had lived for perhaps 2,000 years, the resounding answer was, “NO, NO, NO.” These were descendants of the diehards, the families that had survived the first sweeping invasion of Muslim armies 17 centuries ago, then the occupation of the Ottoman Turks and most recently Saddam Hussein. Now, after the harsh reality of an American-led effort to bring “democracy” to the Middle East, they have given up. Many hope to make it to Europe or Canada. Some would even be willing to live in the United States. But none were willing to go back to their ancestral homes on the Nineveh Plain. The city of Mosul, built on and around the ruins of the biblical city of Nineveh, is now officially fully Islamic even if it were to be retaken by the Iraqi army at some future date.

I departed St. Ephraim’s with the heavy knowledge that the Central Intelligence Agency (CIA) had been training Sunni ISIS fighters in Jordan not far from this very location just two years ago, in the mistaken belief that they were more “moderate” than the Sunni al-Nusra organization that was part of al-Qaida. Now the United States is training a new group of “moderate” Sunni fighters in Jordan, to take on the Islamic fighters Americans trained just two years ago.

After the efforts to “democratize” Libya, it no longer exists as a nation state. Virtually every Christian who lived there is dead or run off. In Syria, hundreds of thousands of people have died, and 2 million were displaced by the joint American-Saudi effort to “democratize” that nation. The social order and economy of Egypt have been severely damaged by American efforts at “democratization.”

Oddly, the most stable nation in the Middle East is Saudi Arabia, the vicious dictatorial monarchy supported by the United States. Nations where women had equal or near equal rights and Christians could live freely have been destroyed by efforts to “democratize” them. But the United States stands by Saudi Arabia, which has no elections, no rights for women and a brutal secret police force under which people vanish from their homes in the middle of the night. Critics of the king are whipped nearly to death, as President Obama takes occasion to bow to him.