The Christian children of Syria are suffering, not only those facing jihadists, but those that are in deep poverty in Lebanon. What happened?

Syria had a higher per capita number of college graduates than did the United States before the invasion of Western-supported Jihadists through Turkey beginning in Islamic terrorists from all over the world travelled through Turkey to do Jihad in secular Syria for the purpose of establishing a Sunni Muslim Caliphate.

Syria was an advanced nation with large manufacturing areas. It had one of the largest pharmaceutical industries in the world. Many of those companies were owned by Christians.

Because of a Russian military presence, including a Russian naval base located in Syria on the Mediterranean, many Western nations including the United States, jumped at the chance to support al-Qaeda rebels and later the Islamic State, claiming them as “legitimate opposition” to the secular Syrian government.

It was not until the Islamic State controlled large areas of Syria and Iraq and began attacks on American and European interests, that Western nations moved in and reluctantly began bombing campaigns against the very groups that they had armed beginning in 2011.

The jihadists supported by Western nations had targeted the Christian population. Entire villages of Christians were wiped out. Tens of thousands of Syrian Christians fled to Lebanon and Jordan. Meanwhile, Iraqi Christians fled as the Islamic State troops from Syria took over much of the traditional Christian homeland in northern areas including the Nineveh Plain.

As Western and Russian air forces destroyed jihadist targets, the Syrian government took back territory the Jihadists had controlled and discovered hundreds of tons of arms made in the United States, the UK, and Israel. Many of those arms had been used to kill and displace Christians, despite promises made by Sunni Muslim “rebels” not to harm religious minorities.

March 2021 will mark the tenth year of Syria and Iraq fighting Jihadists, and it is not over. Despite the lack of news in the mainstream media there are still areas in Iraq held by the Islamic State while “moderate” jihadists supported by Turkey hold areas in northern Syria.

The amount of suffering by the Christian populations of Iraq and Syria was greater than any other group. As I have reported before … I have been there, and I have been in the destroyed homes and churches and I have talked with and prayed with the survivors.

Christians have suffered in the Middle East ever since the 633 invasion of the Fertile Crescent which includes most of Iraq, Syria and Lebanon, but somehow they held on and continued the Christian faith in the Middle East. Christians live in towns Paul and the other Apostles walked through and preached in during the first century after the Ascension of the Lord.

The Holy Land is not just Israel. The Lord intervened and changed the life of Saul on the Road to Damascus. The ministry of Saint Paul began in Syria!

The programs I began in the Middle East were designed not only to help the beleaguered Christians materially but most importantly — spiritually. The Christmas for Refugees program reinforces the knowledge of the Lord in Christian children who have seen their homes destroyed and in some cases their parents murdered.

The programs of the Religious Freedom Coalition, including the Christmas for Refugees program, help Christian ministries in the Middle East survive. With the dwindling number of Christians, some ministries would be forced to shut down without programs like ours. 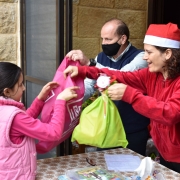 The Chairman’s Report for January 8, 2021
Scroll to top