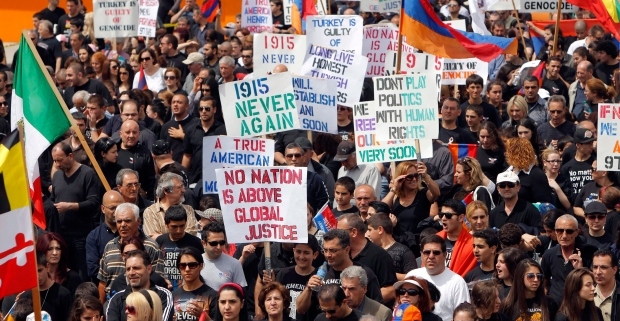 Church blown up on Easter Sunday: Sunni fighters from the Islamic State in Iraq and Syria (ISIS) blew up the Church of the Virgin Mary in Tal Nasri village in Hasaka province, northeastern Syria. The destruction of the church happened while Christians of many denominations around the world celebrated the resurrection of Christ. Built in 1934 the Church of the Virgin Mary in Tal Nasri village was destroyed by the ISIS on Easter Sunday, 2015

The original reporting came from the SANA news agency which is in Syria. Western media for the most part ignores the atrocities of Sunni fighters in Syria. The few outlets that did report the destruction of the church, such as the Daily Mail in London, introduced the story with the words “SANA claimed” despite the fact that the ISIS terrorists had placed a video online bragging of the demolition of the church.

The Church of the Virgin Mary was built in 1934 – keep that date in mind – and is considered one of three main churches in Tal Nasri village, which is located to the south of Tal Tamr town which was earlier overrun by ISIS.

The revolt against the secular government of Syria was originally financed by the governments of Saudi Arabia and Qatar, both of which are Sunni dominated nations with strict Sharia law. Saudi Arabia uses the Koran as its Constitution, and as a result the ruling royal despots will not allow the construction of any churches. There are NO churches in Saudi Arabia. Christian “guest workers” who have been caught praying together in private home meetings in Saudi Arabia have been arrested, tortured, imprisoned and then deported.

According to both Democrat and Republican leaders on Capitol Hill the monsters who rule Saudi Arabia are good friends and allies of the United States, while the secular governments of nations such as Syria in the Middle East are enemies and must be overthrown. Senator Rand Paul is the only one on Capitol Hill with the guts to call Saudi Arabia out for its vile treatment of women and minorities. He called for an actual boycott of Saudi Arabia, just the way the United States boycotted South Africa for not giving blacks rights equal to those of whites.

On April 7th Senator Rand Paul announced his run for President. I fully expect the entire media machine in the United States, which is influenced by Saudi money, to pound relentlessly on every word that comes from the Senator’s mouth for the next eighteen months. Forget the so called “Jewish controlled media.” In the West today wealthy Saudi royals pull all media strings.

Garissa University Killings: Just a few days before Easter, 147 Christian students at the Garissa University College in Kenya were murdered by Sunni terrorists from Somalia. Because of the size of the massacre, Western media were forced to report on the attack. In many newspapers, however, the story was not front page news. In my local newspaper the story appeared half-way down page five. This massacre of Christians was conducted by the Somalia-based Al Shabaab which was also responsible for the attack on the upscale Westgate shopping mall in Nairobi, the capital city of Kenya. Just as was done during the mall attack in 2013, Christians were separated out from Muslims at Garissa College and then executed. While the media reported that students were asked if they were Christians or Muslims before shooting them, that is not accurate in most cases. As with the mall shootings the victims were told to state the name of Mohammed’s mother, or some other fact of Islam that Christians would not normally know.

Nearly 20% of the students were murdered at the small technical college. Kenya is a majority Christian nation, with just 11% of the population Muslim. Of course Muslim groups there claim Kenya is 35% to 45% Muslim. Keep in mind that truth is not a strong suit of Islamic leaders. In the United States, Islamic leaders claim Muslims are nearly 10% of the population and well outnumber Jews. While that figure is currently preposterous, the Obama Administration is moving as many Muslims into the nation as quickly as it can with the idea that this will somehow make Islamic fighters in the Middle East and Africa suddenly love the “Great Satan.”

Michelle and I join the American people in expressing our horror and sadness at the reports coming out of Garissa, Kenya. Words cannot adequately condemn the terrorist atrocities that took place at Garissa University College, where innocent men and women were brazenly and brutally massacred.  We join the world in mourning them, many of whom were students pursuing an education in the pursuit of a better life for themselves and their loved ones.

Nowhere in the statement did President Obama mention the name of the Islamic terror group Al Shabaab. Nor did the statement mention Islam, Muslims or Christians. The fact that the Muslim terrorists specifically targeted Christians was never mentioned. Oddly, Al Shabaab translates to English as “the youth” or “the Youngsters”.

In Pakistan during the same Holy Week period, two Christians were murdered in front of a Children’s Hospital and the brother of a Christian human rights attorney was shot. There are currently four Christians imprisoned on death row in Pakistan for the crime of “blasphemy.” The charges are false, of course. Often these charges are brought against Christians because of a personal disagreement, or a Muslim neighbor simply wants to steal their property.

There was no reaction from the White House on the continued attacks on Christians in Pakistan or the arrests for “blasphemy.” But the same week as the attack on the family of the Christian human rights attorney, Obama’s State Department announced it had approved of a transfer to Pakistan of fifteen AH-IZ Viper helicopters and 1,000 hellfire missiles manufactured by Lockheed Martin. The total package of military hardware, including communications equipment, will cost American tax payers $952 million. That is just shy of one billion dollars.

Meanwhile in Syria, Sunni fighters supported by the United States fired mortar rounds into Christian neighborhoods of Damascus from Good Friday through Easter Sunday. In areas of Iraq and Syria controlled by ISIS (or ISIL) many more Christians were probably killed as well. More churches were destroyed as mentioned above, and graves desecrated.

This Easter, however, there were fewer attacks on Christians than in previous years. In the past few years there have been church bombings with fatalities on Easter Sunday in the Philippines, Indonesia, Nigeria, Pakistan and Bangladesh. Virtually all the overt attacks against Christians during Easter are by Sunni Muslims … yes … the Saudi variety. “I fear we are already in World War III,” Pope Francis said this week, explaining that genocides such as happened to the Armenians in World War I and were repeated with the atrocities of Hitler and Stalin in World War II are being repeated today. His comments angered the Turks, who have rewriten history to erase their slaughter of 1.5 million Armenian Christians.

April 24th is the official Armenian Genocide Remembrance Day and I urge you on that day to pray for the Armenian Christians who still today are persecuted in Turkey, a nation which  is becoming more radically Islamist and tyrannical each and every day.

The high cost of Saudi friendship: The media looks the other way as Saudi Arabia finances the teaching of Wahhabism which is a radical version of Sunni Islam. All over the world, including in the United States, more than 90% of the textbooks in Islamic Schools and mosques come from Saudi Arabia and over 90% of mosques in the United States receive some type of funding or support from the radical Sunni royals who rule Saudi Arabia with the Koran as their Constitution.

Virtually all the Islamic terror groups of the Sunni variety are, or were at one time or another, financed at least in part by Saudi Arabia; that includes the Taliban, al-Nusra and yes, the Islamic State (ISIL or ISIS). The Saudi’s just can’t learn that radical Islamic groups cannot be controlled by governments, and some of those groups the Saudi’s have financed in the past are now a threat to them, which is the case with the Islamic State.

Why are Western leaders silent about Saudi sponsored terror? The hard reality is that the Saudi Royals just about own downtown London and have invested in most of the western financial markets and major media outlets with their ill-gotten oil profits since World War II.

Sit back a minute and just imagine the outcry if Russia, which is the third largest oil producer in the world, began to pump oil at the fastest rate it could and then dumped it cheap into the markets. Senators would be calling for boycotts and perhaps even war.

Beheaded Coptic men had families: There should by now be no Christian in America who does not know that 21 Coptic Christian men from Egypt were beheaded on a beach in Libya when they refused to renounce their faith in Christ.

All 21 of these were in Libya because they needed work to provide for their families. A member of my church requested that I find a way to support at least one of the families of those men. In the process of trying to obtain that information, I learned that 13 of the 21 men came from one village in Egypt.

There was a commemorative Coptic mass held for all 21 Christians beheaded by ISIS on the 40th day after their deaths in the village of Al Our in the Minya region of Upper Egypt. A mob identified by witnesses as Muslim Brotherhood members attacked the home of one of the martyr’s families, set fire to the car of one of the mourners, and later lobbed Molotov cocktails at the site of the church being constructed in their memory. Al Our village was the home of 13 of the Egyptian Coptic martyrs.

I am still working to learn how the families may be helped individually and if a program has been set up to help in the construction of the church.

Remember – You must always sign on at www.smile.amazon.com, not just at Amazon.com. This does not affect the cost of the products to you. You can help our mission projects to persecuted Christians by signing up before making one more purchase at Amazon.

In April we have stretched our mission budget to help a ministry in Jordan move some   young Iraqi children of martyred Christian parents, to adoptive Christian homes in Jordan and Lebanon. If you have not assisted our programs this year so far please consider a gift at this time.

With Malice Toward Nun
Scroll to top