Cancelled programs reinstated: Most of the Christmas for Refugees events in Lebanon and Syria were reinstated. One of the Christmas programs for Syrian refugee children was held in Akkar which is in the far north of Lebanon. It is a small governorate (Similar to a state in USA) of only 304 square miles. The major city of Homs, Syria lies just to the East.

About one out of every three people now living in Akkar are Syrian refugees, many of them Christians from Homs. There were more than 100,000 Christians in Homs before the current plague of conflicts.

We held three Christmas programs in Homs, Syria, two at the Homs Baptist Church and one at The National Evangelical Church and many more events in other Syrian cities.

Most of the children now attending our Christmas programs are refugees from Syria. Many of the Syrian Muslim refugees are returning to Syria because of the bleak economic conditions in Lebanon. Many Christians are unable to return to Syria because their homes have been destroyed. Still, hundreds of thousands of Christians did stay in Syria.

Nativity scenes were played out by the children at most of our Syrian events. Live nativity plays reinforce the divinity of Christ to the children as they portray the birth of our Lord. The center of all Christmas programs isn’t gifts or games, the center of the programs is Jesus. The goal is to remind the children of the central place of Jesus in their lives while providing for them at the same time. 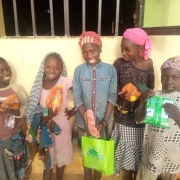 The Live Nativity on Capitol Hill