I recently received a group letter asking me to attack Senator Rand Paul:  It seems that suddenly Senator Paul had come under attack as the “bad guy” who was blocking HR-390, the Iraq and Syria Genocide Emergency Relief and Accountability Act of 2017 which the Religious Freedom Coalition has been working to pass. That accusation is simply not true!

Senator Paul supports HR-390 as written by Congressman Chris Smith and passed unanimously by the House. But — the language in the bill was completely changed by Senator Corker to do little more than set up a “study group” to determine the “strategic interests” of the United States and how to “counter” Russia.

The original House bill as written would have given aid to persecuted Christians who have been the victims of genocide by Sunni Muslim jihadists. Senators never got the opportunity to vote on that bill.  Under the language added by Senator Corker, Syrian Christians fighting with their government against the same Sunni Muslim jihadists who attacked them would be labeled “war criminals.” Christians in Syria who received aid from the government of Russia or the Russian Orthodox Church would not meet the vetting process to enter the United States or to receive American aid. That would include just about every Christian remaining in Syria.

The bill was on hold by the Senate Leadership until the last week of April, when it was suddenly put on  a “fast track” as an election tool to get Christians to vote Republican this fall. But it simply was not the same bill that passed the House last year and Senator Rand Paul was right to put a hold on it until Senator Corker’s language is removed. Senator Paul wants a bill that helps Christians — not one that could endanger them.

The United States now occupies 35% of Syria and has over 20 military bases. Senator Paul believes this bill would allow even more military action in Syria, which he is against.

The group letter to Senator Paul was the subject at the May 1st meeting of the International Religious Freedom Roundtable chaired by Ambassador Sam Brownback. Groups had been convinced to attack Senator Paul by being told that HR-390 had passed the House unanimously. The old bill was … but no Senate vote has been held on the old version. I made sure a representative was there from Senator Paul’s office. Both the Senator’s representative at the meeting and I presented reasons why the bill’s original language.

I will continue to work to restore the language of HR-390 to help all the persecuted Christians of Syria and Iraq. Situations such as this are a part of our continued work on Capitol Hill, and help illustrate why we need to have a presence here. [su_button url=”https://diapersforrefugees.org/helping-christian-refugees/#DonateLanding”]Please help this month.[/su_button] 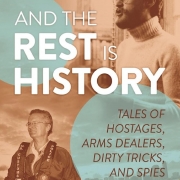 Nigeria – Much accomplished in a very dangerous situation
0 replies

The April mission trip to Nigeria – Part 2
Scroll to top