Christmas for Refugees in the Middle East (Part 1)

William J. Murray pictured with 19 of the 22 volunteers at the first Lebanon Christmas event for 2018.

In the photo at right I am standing with nineteen of the twenty-two volunteers who helped with the first Christmas event in Lebanon. The Christmas program, including a dinner and a gift, required that many adults for just 100 children. That is a ratio of one adult to five kids.

Some were involved in transportation, others put on the puppet show and still others were concerned with music. The meals had to be distributed, and the order and safety of the children had to be watched as well.

Keep that figure in mind … there were twenty -two adults needed for a program for 100 children. In all, the Christmas program for 2018 will serve nearly 10,000 children. For large groups such as we have in Jordan and Iraq, there is one adult standing every five rows of seats to manage behavior and assist with snacks, drinks, coloring contests and fun games the children play. We have had up to two hundred volunteers for just one event in Iraq and about that same number for large events in Jordan. In the larger events, contract personnel such as caterers and bus drivers are not counted because they are hired.

Of the 100 children at the Lebanon event mentioned above, 98 of them were Syrian and just two were Iraqi. Four women who came along to either watch or volunteer had recently accepted the Lord, but were still wearing the traditional Islamic hijab head covering because of personal situations. This time, as in the past, I have tried not to include any of the new Christians in the photos because I do not want to cause them family or safety issues.

As I was leaving, two different women wearing hijabs requested to take photos of their children with me displaying the gifts they received for Christmas. It is always a blessing for me to see those from a Muslim background who have recently accepted the Lord at the Christmas for Refugees events. This happens often in Lebanon and Iraq. However, photos of women wearing a hijab can confuse American supporters and are not published.

Toward the end of the program the chairs were moved out of the way and children sat in small groups, each with an adult leader, to learn more about the Lord

The first four events: There were four Christmas events for children the first week of December, but I was only able to attend two of those while in Lebanon.

Of those four, two were held by brand new churches founded by Syrian refugees. The events the first three photos depict were in a church in Mansouri which is a district of Beirut where many refugees live.

The Christmas programs are conducted differently in Lebanon than in the other nations because of the sheer number of events and the distances between them. This year there will be a total of 18 events for the children in Lebanon.

Rather than using strictly our example program, in Lebanon each church develops a proposal for an event with the condition that (1) the program must center on the true reason for the coming of Jesus Christ, and (2) that our safety requirements are met. The proposals are evaluated, and recommendations made if needed. The churches provide the bulk of the volunteers, and our ministry furnishes the meals, gifts and other funds that may be needed.

The horrid persecution of Christians in Iraq and Syria has almost totally erased the divisions between denominations, as all struggled to survive the brutal persecution of the Islamic State’s Sunni version of Islam. Christmas for Refugees events have been held with the cooperation of all denominations.

It is not unusual for volunteers to be present at the same event for the children from both Evangelical and Catholic churches.

Hope restored: The purpose of the Christmas for Refugees program is to restore joy and hope in children who have been robbed of their homes and their childhoods. Families living in one room of a basement or worse, in a tent in an open field in the Bekaa Valley in Lebanon, were formerly middle class in Iraq and Syria. With their homes and churches destroyed, they can still find the reassurance of their relationship with Jesus Christ.

Christmas for Refugees is about the hope that comes through Jesus Christ!

Children on one side of the room hold up coloring they did of the Nativity. On the wall in the back is a poster with the goal. Ten were chosen and those children put their hand prints on the poster that now hangs in our office.

Christmas parties in Iraq: The first Christmas for Refugees Christmas party was held on December 14 in Qaraqosh, also known by its Assyrian name of Baghdida. Unlike in Lebanon, these are not “events”, they are parties.

In one word, Iraqi Christians celebrate Christmas ‘loud.” Every child shows up in the best clothing their families can find which is often donated. The common theme is the colors red and white, and Santa Claus is displayed even in churches at Christmas time. This is done because Christmas is theirs, it is the one thing that cannot be taken from them.

Of the first event in Qaraqosh, I can honestly say that my ears rang at the end of the party for Jesus’ birthday. The Religious Freedom Coalition supplies the funding and direction, but the flavor of the Christmas parties is determined by the local ministry that provides the service. They understand the children of their community far better than we do and know best how to reach them for Jesus. In Iraq there are lots of clowns at Christmas parties as well.

Here are some numbers from the first Christmas party in Iraq that may surprise you, but should give the scope of the events Christmas for Refugees is responsible for:

The room we used was too large to capture in one photo. Here my wife Nancy and I stand near the center of the room. In all 546 children were at this one Christmas party that lasted almost four hours.

The length of each event varies depending on location and the difficulty in returning children to their homes. In Qaraqosh this process was relatively simple and the party lasted almost four hours, with different types of entertainment and of course the real reason for Christmas, the coming of our Lord, Jesus Christ.

More than 1,500 children attended the three events held in Iraq while I was present. Every event was centered on Jesus, from coloring contests to puppet shows. Even traditional line dances for Christmas were about the Lord. Christmas for Refugees is about hope, and considering the devastation that has been done to Christian towns on the Nineveh Plain, these children really needed the hope and joy that can come from events such as these.

School one block from building where Qaraqosh Christmas party was held

Celebration in the midst of devastation: In Qaraqosh and Bartella the rooms we used for the Christmas parties were in recently renovated commercial centers. The rooms were built for weddings and other social events. Just on the other side of the street from both locations, other buildings still lie in rubble.

Our ministry driver, Karam, was formerly a wealthy businessman in Qaraqosh. He owned a large machine shop with his brother. The brothers had beautiful attached homes next to each other. Every machine was stolen and the shop buildings for the business destroyed.

Hundreds of children attended this Christmas party in the Erbil / Ankawa area. All were displaced from their homes in the Nineveh Plain

Karam’s family home was lived in by Islamic State fighters until they were forced to retreat. The last thing they did was start a fire in his home fueled with C-4 that melted the metal beams in the walls.  His business and home destroyed, he now drives a van for our ministry partner, one that is used for diaper distributions.

The Christmas parties in Iraq are so large it is difficult to get one photo that shows all the children attending a Christmas party. In Erbil we had rented a room with a balcony and I was able to get a photo that showed most of the kids. The tables at right and left were later used for games and for the meal.

This banner was displayed over the stage at every event in Iraq. At the top in Arabic is Luke 2:11 “Unto you is born this day in the city of David a Savior, which is Christ the Lord”. Below is a Christmas greeting and the names of the ministries.

There are hundreds more great photos of the Christmas parties and events in Lebanon, Iraq, Jordan, Syria and Nigeria at our special Internet site at ChristmasForRefugees.org. Just click on “mission photos” in the navigation bar.

There are also articles posted that include videos, at both Christmas4Refugees.org and ReligiousFreedomCoalition.org sites. Many of the best photos and videos are also posted at  Facebook.com/ChristmasForRefugees.

Jordan and Syria: There is just not enough room in four pages for all that happened this Christmas. In the next newsletter I will report on our Christmas events in Jordan and Syria. 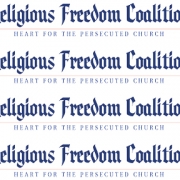 Christmas in the West Bank
Scroll to top