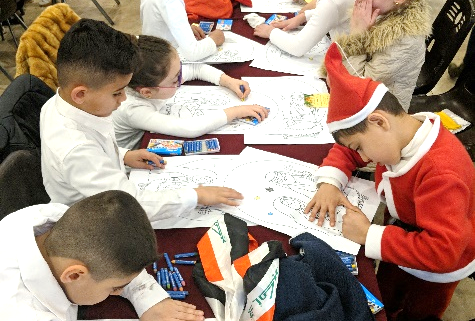 Christmas for Refugees 2019 begins amidst strikes and demonstrations

The problems in Lebanon: My wife Nancy and I were scheduled to leave for Beirut, Lebanon on December 5th on Air France as part of an 18-day inspection tour of Christmas for Refugees events. The day before we were to leave, I received a notice from Air France of a nationwide transportation strike in France beginning on our departure date.

In the email Air France noted that it would “try” to operate all “long-haul” flights including those to and from the United States. We were given the option to change flight dates without a penalty. To do so I would have had to change all transportation and hotel arrangements for four nations.

Trusting the Lord always brings out the best results. After some prayer I decided to just head to the airport on December 5th. Fortunately, the flight did operate to Paris but then there was some question as to the connecting flight to Beirut. Again, the Lord provided and the connecting flight to Beirut did operate. The employees that cater the flights were on strike so there were cold sandwiches served which the crew picked up at a store on the way to the airport.

We arrived in the late afternoon of the 6th which was great, but there was another issue. Nationwide demonstrations had shut down streets, and in some places, entire areas of cities. The massive demonstrations had forced the Prime Minister to resign. At virtually every corner of major streets in Beirut there were armed Lebanese soldiers.

Our ministry partners in Lebanon had been forced to change plans for several of the Christmas for Refugees events. At some we could no longer serve a hot meal, but these, as well as all the events for 2,000 children will be held this year.

Because of the schedule changes Nancy and I would only be able to attend two events in Beirut before leaving for Iraq. Both Christmas events were a blessing to the children who attended and a blessing for Nancy and me to participate in. It is always a joy to watch the children as they forget, at least for a few hours, the situations they have been forced into as refugees. The Christmas programs in Lebanon continued until Christmas week, and were a blessing to many.

The majority of the children at each of the events were Syrian refugees. At the first eventat a refugee center all the planning and presentation was done by Syrian volunteers who have fled jihad attacks in Syria.

Often at the Christmas events for the Christian refugee children in Lebanon there are women, including volunteers, who show up in either a hijab or a full black burka. These women love the Lord and are sometimes the most vocal in singing praises to the Lord.

Sadly, over the years I have felt it necessary to edit out the ladies wearing hijabs or burkas from pictures and videos for their own protection and because of misunderstandings that supporters may have seeing the photos. This year we will show some, but not their faces.

Please don’t look at a photo and say to yourself, “What are Muslims doing there?”

Some of these saintly women are in family and other situations such as living arrangements that make it impossible at least for now to shed traditional Muslim type clothes.

One lady in particular told me how her son was cured of a serious illness by the Lord after she prayed with a pastor. She now works in the church, constantly volunteering, but still in a full-length burka.

It was miraculous at one event where several of the mothers wearing burkas at the back of the room stood up and sang praises to the Lord with the children. God has His hand on, and is moving many of the families we help to the Lord.

The first event in Lebanon was held in a space rented by a church for Syrian Christian refugees to meet and held only about 90 children.

The second Christmas event for children in Beirut was held in a Baptist church and we had 160 children present. Because there was more space, there was room for a more sophisticated puppet show exploring the birth of Jesus and what it means to each of us. In all, there will be as many as twenty Christmas for Refugees events in Lebanon as circumstances allow, in many different church denominations including Catholic, Orthodox, and Wesleyan.

We are trying to reach as many children from traditional Christian families as we can, particularly those with broken faith who no longer attend church. There are follow up programs by the individual churches to reach children whose families have broken bonds with the church as a result of war.

Some realities of Middle East ministry

Just about anything can happen when traveling in the Middle East. We were to fly directly from Beirut, Lebanon to Erbil, Iraq on the 10th of December. When we got to the check in counter at the Beirut airport the agent told us that our reservations had been canceled.

Oddly the agent told me, “Nothing to worry about” and sent us to a ticket counter. Many years of working in Third World countries and war zones has taught me that it is far better to hand these situations over to the Lord rather than to argue.

Thankfully at the ticket counter the reservations were reinstated, and we ran with suitcases in tow back to the check in, just about the time the last bags were being accepted.

Normally Nancy and I only take carry-on bags on these trips but this Christmas the trip is 18 days long because of scheduling issues, making it just about impossible to live out of a carry-on bag.

We stayed at a very secure hotel in Erbil. The hotel has a twelve-foot high blast fence, guard towers at each of the four corners of the property and bags are checked at a secure location outside of the hotel building itself. All guards are armed with AK-47s. Our ministry partner picked the hotel after some security issues.

Oddly, I have before left this hotel and traveled unarmed to areas that were not secure such as Mosul. Now, to go as far as Bartella for our Christmas programs we must pass through four military check points. Some are operated by the Iraqi army, some by the Kurds and one by a Shia Muslim militia. The Shia militia controls the entrance to the Christian town of Bartella.

I could not begin to attend and review all the Christmas programs held by our Christmas for Refugees program in the Middle East. There are simply too many. For Lebanon, Iraq, Jordan and Syria combined more than fifty programs were planned. So far Nancy and I have attended two in Lebanon and three in Iraq. In the next newsletter I will report on events in Jordan, Syria and the West Bank.

The first Iraq Christmas event we attended was in Bartella which is a majority Orthodox Christian community. The Bishops and priests are very friendly to other denominations including evangelicals. Unlike Catholics, the Orthodox priests can marry. Two of the priests brought their children to the Christmas event in Bartella.

The daughter of one priest was the lead singer of a hymn by a choir for her age group and another priest’s wife worked with our staff to coordinate events.

In all 570 children attended the first Christmas event in Iraq. That is a lot of children to watch over, so they are separated out by age and gender at different tables. No church there is large enough, so we rented a large wedding hall.

The halls are so large that taking a photo of an entire event is very difficult.

The Christmas event in Qaraqosh was attended by over 500 children as well and was extremely orderly. For the most part the program was organized by volunteers from the church. The Christian community is very different from the majority Muslim culture that surrounds them. In the Christian culture women are an important part of the society. Both the Bartella and Qaraqosh events for the children were managed by women. The overall organizer of each event was a woman.

At both the Bartella and Qaraqosh events virtually all the children were associated with churches, and their behavior was very good for the number of children present. When the Gospel message was presented many prayed to be closer to Jesus.

At our event in Erbil there were some behavior issues as many of the children were Syrian refugees who were far from their churches and pastors. Church discipline was obviously lacking but overall the event went well with a great number of the children praying to be closer to Jesus.

In Iraq our ministry partner is working on ways to better reach out to families that participate, and to provide them spiritual support. The same is true of our Diapers for Refugees program. We want to do more than just provide a service; we want to help families get connected to a local church and develop a lasting relationship with the Lord.

This year we had to reduce the age range to between 5 and 10 because of the increased number of refugees from Syria. In the next issue I will cover our programs in Jordan, the West Bank and Nigeria.

Christmas for Refugees program at Nigeria Orphanage
Scroll to top