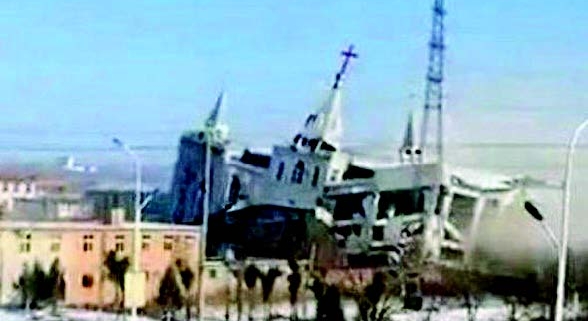 Joe Biden can’t tell the whole truth: I work constantly to advocate on Capitol Hill for persecuted Christians. One of the most important aspects of that work is getting politicians to admit that Christians have been and continue to be persecuted, particularly by Muslims.

I was overjoyed when I learned that President Joe Biden was going to issue an official statement recognizing the Armenian Genocide. He had made that promise during his campaign.

Then I read President Biden’s statement.

In his statement that did not even mention the word “Christian,” Biden just said the American people honor “all those Armenians who perished in the genocide that began 106 years ago today.” He also did not mention that the murderers were Muslims.

Without ever saying that the Armenians who were murdered and chased out of Turkey were Christians, President Biden managed also to forgive the killers by saying: “Over the decades Armenian immigrants have enriched the United States in countless ways, but they have never forgotten their tragic history… We honor their story. We see that pain. We affirm the history. We do this not to cast blame but to ensure that what happened is never repeated.”

I have the photos from 1915 of the Christian women who were raped and then crucified. The photo shows a line of crosses with the naked bodies of the young women hanging on them. I was going to place the photo here, but it is so disturbing that I decided not to. I was afraid that some seeing it would become physically ill.

President Biden can, however, use the word “Muslim” to declare that they are victims of genocide in China. There is no mass murder of Muslims in China. The treatment of Muslims there is harsh, but nothing like what happened to Armenian Christians. Yes, the Communist Chinese Party runs mandatory “re-education” centers in Xinjiang to secularize Muslims. They are forced to recognize the Communist Party as supreme and to renounce jihad.

Christians are also persecuted in China and forced to accept the official state version of Christianity.

Pastors and elders of underground churches have been sent to prison for many years. Under President Xi, church buildings have been demolished – and not just small ones. One church with over 1,000 seats was bulldozed down.

The Christians in China are never mentioned by President Biden. America’s only concern is China’s crackdown on Muslims. WHY? Because it is a strategic issue. The goal of the Biden State Department, and Trump’s before it, has been to turn Muslim nations against China. In reality neither Biden nor Trump cared about the Muslims, they just wanted trouble for China.

Saving a Life
Scroll to top