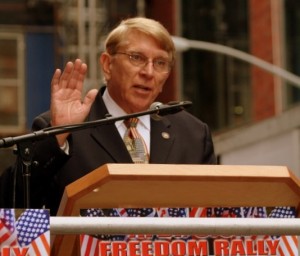 Remembering 9-11: Our leaders want us to forget it because of the involvement of Saudi Arabia and our other Sunni Muslim “allies.” I wrote my remembrance of 9-11 exactly one year after the attack, and each year it is placed here at our website.

There are many new supporters of the Religious Freedom Coalition who have never read my observations from that time, so I have included here today. The following is what I wrote in 2002.

It was just after 9:30 when I got off the phone with the White House official and was passing the Pentagon on my way into Washington. It was literally at that instant that American Airlines Flight 77 slammed into the south side of the Pentagon. I never saw the airplane hit, but literally felt the explosion rattle the windows of my Jeep. I can honestly say I did not know what had happened as I saw the smoke and flames rise from the Pentagon in my driver’s side outside mirror. I thought it must have been a truck bomb, since I was not willing to believe that Islamic madmen had managed to hijack more than two jets. The irony of my personal journey that day was the cancellation of the news conference on the Sudan Peace Act. That act was written for the sole purpose of stopping the slaughter of Christians in the Sudan by its Islamic government. During the Clinton Administration the

Sudanese Muslims had been given a free hand at killing Christians as had the Islamic government of Indonesia. Clinton’s only foreign intervention to “save” a religious group was the bombing of Christian Yugoslavia. The destruction of Yugoslavia by Clinton led to the construction of terror bases in Europe for the first time. Without the Yugoslav army to intervene, terror cells were free to launch attacks against the West from Kosovo.

Within days of the Jihad attack , the Bush Administration was proclaiming Islam as a “religion of peace” and America’s left-wing media launched into a “blame America and defend Islam” politically correct agenda that amazed even me. Not a single news outlet would place the blame for the attack where it belonged … Before the end of September, I had written and placed advertisements in major newspapers including the Washington Times, clearly showing that there was no difference between the Taliban of Afghanistan and our Saudi Arabian “allies”. In fact the Saudi princes had financed Bin-Laden and his terror cells.

Saudi Arabia and its royal families financed the Jihad attack against the United States by paying Osama Bin-Laden not to overthrow their corrupt regime. The tide of truth is rolling over the politically correct. Not even the National Education Association (NEA) can stop the truth. The NEA has presented a “blame America” curriculum to be taught by teachers this September. The NEA suggested that teachers point to the internment of Japanese citizens during World War II and other acts of American “intolerance.” The NEA’s official position is that “…no one group is to blame for 9-11.” The vast majority of America’s teachers have rejected the NEA “guidelines” and will tell the truth about what happened on 9-11 to their students.

There is blame to every evil deed and there is plenty of blame to go around for what happened on 9-11. We can blame our politically correct leaders for refusing to follow up leads to terrorist activity for fear of being “insensitive” to Muslims. We can blame a press and educational system that equates the vile deeds of Mohammed with the peace of the Gospel of Jesus Christ. The real blame in America rests in the failure of our civil and religious leaders to understand Islam. Terrible things have been done in the name of Christianity over the years, but we always had the words of Christ to return to. Some good things have been done in the name of Islam over the years, but unfortunately, men such as Osama Bin-Laden can always go back to the words of Mohammed. Mohammed was a vile murderer and a thief. The first massacre of Jews was conducted by him personally at Medina in the year 627.

Muslims have no fear of lying. In the Washington Times, Faiz Rehman of the American Muslim Council had the gall to claim last month that 16% of those killed on 9-11 were Muslims. He claims that 500 of the 3,000 killed were Islamic and that America has a debt to Islam. American newspapers have printed this lie without challenge. What is our defense? Truth rather than political correctness is our only defense. We need leaders who will tell the truth about Islam, tell the truth about Islamic nations, and tell the truth about the reality of Islam in America. We need leaders who are willing to take action against those who attack us and that includes those like the Saudis who finance the terror. Until then America will have no security and our families and descendants will be at risk. (First published September 11, 2002)