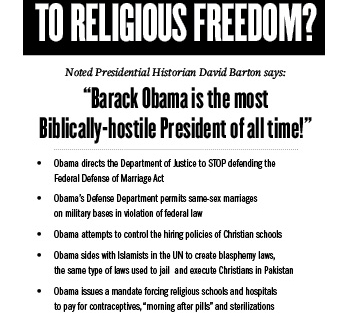 EXPOSING OBAMA’S WAR ON FAITH – Religious Freedom Coalition newspaper adstelling of the Obama Administration’s threats to religious freedom begin running on May 13th. The first newspaper to accept the ad was the Panama City News Herald. This newspaper is in the Panhandle of Florida, in an area that has a large military presence. Many of those living in the area fought for religious freedom in Iraq and Afghanistan, only to see Christians persecuted by the predominantly Muslim governments there.On May 16th the ads will appear in the Washington County News in Chipley, FL and the Holmes County Times Advertiser in Bonifay, FL. The ads’ schedule will start to move south along the Florida Gulf Coast with areas around Tampa and Naples in the next few weeks. We will not advertise in the very liberal Tampa and St. Petersburg, Florida newspapers. It is not our goal to anger liberals, but to encourage social conservatives to contact their congressmen and Senators to demand that Congress block President Barack Obama’s continued attacks on religious liberty. Read more
OBAMA’S GAY AGENDA – Obama has moved back to the position he had on same-sex marriage in 1996. In a typed and signed statement, Obama said: “I favor legalizing same-sex marriages, and would fight efforts to prohibit such marriages.” Then, when he ran for the Senate in 2004 he said marriage should be between a man and a woman. While running for president he said he was against same-sex marriage, but this week he declared he was for it. What changed his mind back to his 1996 position? Money. Several gay “super-pacs” informed Obama that unless he backed same-sex marriage they would spend no money on his reelection. A man of principle Obama is not.
GOVERNMENT RATHER THAN GOD – Just what Obama ordered: One in five Americans-the highest percentage in the nation’s history-relies on the federal government for benefits, ranging from housing, health care, and food stamps to college tuition and retirement assistance. That’s more than 67.3 million Americans who receive subsidies from Washington. The federal government spent more taxpayer dollars than ever before in 2011 to subsidize Americans. The average individual who relies on Washington could receive benefits valued at $32,748, which is more than the nation’s average disposable personal income ($32,446). Read more
CONGRESS
PROTECTING CHAPLAINS – Rep. Todd Akin (R-MO) added an amendment to the FY2013 National Defense Authorization Act, which protects the rights of conscience of military chaplains. Akin, who is a member of the Prayer Caucus, announced that he will offer an amendment to the bill to provide specific conscience and religious freedom protections for military chaplains and other service members. Akin said, “Chaplains and service members should not face recrimination or persecution in the military for standing strong on their religious beliefs in opposition to homosexuality. A military chaplain is charged with meeting the religious needs of all of those under his or her care, but that chaplain must also remain true to their own faith.” Rep. Akin’s amendment draws from the Military Religious Freedom Protection Act (H.R. 3828) introduced by Rep. Tim Huelskamp, which would provide similar protections for service members. The bill was passed out of committee with Congressman Akin’s amendment being approved. Read more
CAPITOL HILL PRAYER EVENT – A prayer event was held in U.S. Capitol this week. On Tuesday in the U.S. Capitol, a ceremony took place commemorating the 223rd anniversary of President George Washington’s first inauguration. The event focused on America’s Judeo-Christian heritage, specifically highlighting our first President’s reputation as a man of prayer. Rep. Louie Gohmert noted, “Preachers of every Christian denomination preached Christian doctrine in this chamber – right here where we sit.” Read more
RELIGION AND CULTURE
CAIR ATTORNEY TRASHES USA IN EGYPT – Palestinian-American Lawyer Lamis Deek accuses the major corporations and the US Department of Defense of financing films vilifying Arab and Muslim communities. Deek is associated with CAIR, the same CAIR that helps pick Muslim chaplains for our military. The CAIR lawyer accuses American corporations and the Defense Department of being “racist” against Muslims. More at MEMRI

HILTON HOTEL PROMOTES PRO-SHARIA CONFERENCE – The Florida Family Association released an email alert and online article on May 1, 2012 which reported that the Islamic Society of North America is planning a conference at the Hilton Airport Tampa Westshore on May 11-12, 2012. Thousands have protested the conference which will promote sharia law for the entire United States. Read more
MORE FROM THE RELIGIOUS FREEDOM COALITION
CONSTITUTION OR SHARIA CONFERENCE DVD – This is the complete set of DVD’s from the November 11, 2011 Constitution or Sharia conference in Nashville, Tennessee. The Constitution or Sharia: Preserving Freedom Conference, was the first true national conference on Sharia and the Islamization of America sponsored by major freedom oriented organizations! It was not just another educational conference. How do deal with and stop implementation of Sharia law in the United states was outlined by speakers and in panels. Order today
NEW MAY CHAIRMAN’S REPORT – Now available, the May 10th, 2012 of William J. Murray’s Chairman’s’ Report. IN THIS ISSUE: Religious Freedom Coalition begins advertising campaign exposing Obama’s war on religious freedom / Congressmen demand Secretary Clinton add Boko Haram to State Department terror list / Special on National Day of Prayer events on Capitol Hill / Report on the continued support of Christians in Syria by the Religious Freedom Coalition. Read more
LEARN MORE ABOUT SHARIA LAW – One of the best locations on the Internet to learn about Islamic Sharia law and its effect on the West is www.shariafreeusa.org FACEBOOK FAN? Sharia Free USA now has a Facebook page with more than 1,500 followers. Join with us at Facebook today!
INTERNATIONAL
MUSLIMS ELECT SOCIALIST PRESIDENT IN FRANCE – Atheists and Muslims overwhelmingly voted for French socialist Francoise Hollande. Believing Catholics and practicing Jews, on the other hand, voted for Sarkozy. Put another way: Those who want to hang homosexuals and those who want same-sex marriage voted for the socialist who will impose more taxes on the few who still actually work in France. Read more
KUWAIT: FINAL DETAILS ON DEATH FOR BLASPHEMY – Kuwait’s parliament passed a bill authorizing the death penalty for Muslims who curse God, the Qu’ran and its prophets, including the wives of the Prophet Mohammed. Non-Muslims face a jail term of not less than 10 years; defendants who repent will be spared capital punishment in lieu of five years imprisonment and a fine of $36,000. Read more
REBELS WE SUPPORT KILL CIVILIANS – The so called rebels supported by President Obama and Senator John McCain exploded two car bombs in Damascus, Syria killing 55 innocent people and wounding hundreds more during morning rush hour. Read more Syrian church leaders condemned the bombings as another suicide car bomber was stopped by Syrian forces in Aleppo which has a large Christian population.
ISRAEL FACT FINDING MISSION – A once in a lifetime mission led by William J. Murray, William Federer and Frank Gaffney, all three experts on Israel and Islamic affairs. Not a standard “tour,” the mission includes visits to settlements and military bases plus evening panels. Read more
BOOKS BY WILLIAM J. MURRAY
Now available at our online store. Books by William J. Murray
https://religiousfreedomcoalition.org/wp-content/uploads/2012/05/RFCenemyFINAL.jpg 720 352 Air Spark https://religiousfreedomcoalition.org/wp-content/uploads/2020/03/RFCFinal.jpg Air Spark2012-05-11 22:46:242012-05-11 22:46:24Report From Washington - May 11, 2012