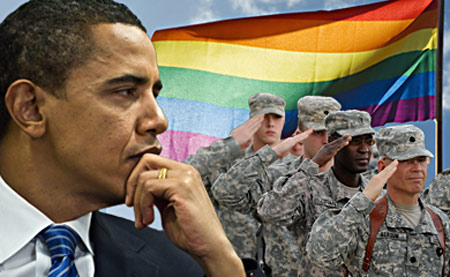 THE PRESIDENCY
CHAPLAINS MUST RECOGNIZE SAME- SEX MARRIAGE – President Obama has informed the Congress that he will veto the military authorization bill because of an amendment added by Congressman Todd Akin (R-MO) that would allow military chaplains to refuse to participate in same-sex marriages. Obama said he would veto all funding for the military unless chaplains can be forced to violate their faith. Read more
OBAMA ORDERS VIOLATION OF LAWS – DOMA, the Defense of Marriage Act, is the law of the land. DOMA defines marriage as between one man and one woman and specifically states that the federal government will not recognize any other type of union. President Barack Obama has now ordered the military to preform same-sex marriages, even in states where same-sex marriage is constitutionally forbidden. As president, it is Barack Obama’s duty to uphold the now, not to order others to violate it.
NEW AD POINTS TO MORE OBAMA VIOLATIONS OF RELIGIOUS FREEDOM – The Religious Freedom Coalition has a continuing advertising campaign designed to stop President Barack Obama’s frequent attacks on religious freedom. This weekend, an ad listing even more of Obama’s egregious insults to religious freedom was placed in the weekly edition of the New York Times which is distributed in Washington, DC and mailed to all 50 states. See ad
CONGRESS
PROTECTING CHAPLAINS – As mentioned above, President Barack Obama has threatened to veto the entire military authorization bill unless chaplains can be ordered to violate established law. Below is the exact wording of Rep. Todd Akin’s amendment to the FY2013 National Defense Authorization Act, Section 536 of H.R. 4310 states in part that no member of the armed forces may “direct, order, or require a chaplain to perform any duty, rite, ritual, ceremony, service, or function that is contrary to the conscience, moral principles, or religious beliefs of the chaplain, or contrary to the moral principles and religious beliefs of the endorsing faith group of the chaplain.”
GROUPS HELP FIGHT INTERNET GAMBLING – The Religious Freedom Coalition and 12 other of the nation’s leading pro-family advocacy groups submitted a letter to the leadership of the U.S. Senate and House of Representatives calling for them to act immediately to stop the massive expansion of internet gambling enabled by Attorney General Holder’s surprise reinterpretation of the Wire Act. Holder’s action would allow states to sell lottery tickets on the Internet. Read more
TAXPAYERS ARE PAYING FOR ABORTIONS – Congressmen Bill Huizenga and Dan Boren introduced H.R. 5646, the Homeland Security Respect for Life Act, which closes loopholes that allow taxpayer funds to be used for abortions for illegal immigrants in detention by the Department of Homeland Security. The bill mirrors language that is currently included in the annual Commerce, Justice, Science Appropriations bill which prohibits taxpayer funding of abortions for federal detainees, but not those under DHS jurisdiction.
RELIGION AND CULTURE
UNIVERSITY DROPS INSURANCE BECAUSE OF OBAMACARE – Franciscan University in Steubenville, Ohio, announced that it is cancelling its health insurance policy for students and will not offer any plan that “requires us to violate the consistent teachings of the Catholic Church on the sacredness of human life.” But beyond the contraception mandate, the university also cited skyrocketing costs associated with ObamaCare. Read more
MORE FROM THE RELIGIOUS FREEDOM COALITION
CONSTITUTION OR SHARIA CONFERENCE DVD – This is the complete set of DVD’s from the November 11, 2011 Constitution or Sharia conference in Nashville, Tennessee. The Constitution or Sharia: Preserving Freedom Conference was the first true national conference on Sharia and the Islamization of America sponsored by major freedom oriented organizations! It was not just another educational conference. How do deal with and stop implementation of Sharia law in the United states was outlined by speakers and in panels. Order today |
NEW MAY CHAIRMAN’S REPORT – Now available, the May 10th, 2012 edition of William J. Murray’s Chairman’s’ Report. IN THIS ISSUE: Religious Freedom Coalition begins advertising campaign exposing Obama’s war on religious freedom / Congressmen demand Secretary Clinton add Boko Haram to State Department terror list / Special on National Day of Prayer events on Capitol Hill / Report on the continued support of Christians in Syria by the Religious Freedom Coalition. Read more
LEARN MORE ABOUT SHARIA LAW – One of the best locations on the Internet to learn about Islamic Sharia law and its effect on the West is www.shariafreeusa.org FACEBOOK FAN? Sharia Free USA now has a Facebook page with more than 1,500 followers. Join with us at Facebook today!
INTERNATIONAL

MUSLIM VOTERS ARE BALANCE OF POWER IN EUROPE – Muslims cast the deciding votes that thrust Hollande into the Elysée Palace. He also pledged to change French electoral laws so that Muslim residents without French citizenship would be allowed to vote in municipal elections as of 2014, enabling the Socialist Party to tighten its grip on political power. Read more
BOWING TO ISLAM, NO PORK FOR NEW FRENCH PRESIDENT – Not even in office for a week, Francois Hollande has banned all dishes containing pork products from all government offices, in deference to France’s demanding and perpetually offended Muslim population.
ISRAEL FACT FINDING MISSION – A once in a lifetime mission led by William J. Murray, William Federer and Frank Gaffney, all three experts on Israel and Islamic affairs. Not a standard “tour,” the mission includes visits to settlements and military bases plus evening panels. Read more
BOOKS BY WILLIAM J. MURRAY
Now available at our online store. Books by William J. Murray
https://religiousfreedomcoalition.org/wp-content/uploads/2012/05/GayMilitaryObama.jpg 277 450 Air Spark https://religiousfreedomcoalition.org/wp-content/uploads/2020/03/RFCFinal.jpg Air Spark2012-05-18 21:39:312012-05-18 21:39:31Report From Washington - May 18, 2012