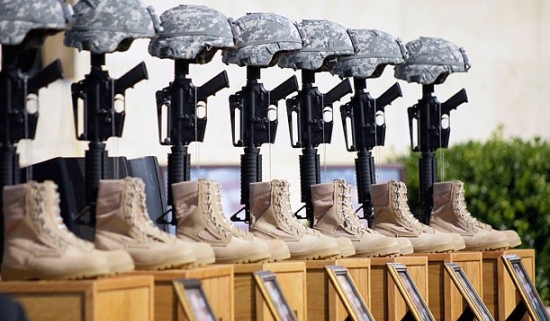 The Presidency
Rubio’s response to Obama – I am not going to join the thousands of others examining the list of Obama’s promises in the State of the Union address, promises he claims will cost nothing. As a social conservative I do want to point our the fourth paragraph of Senator Marco Rubio’s response to Obama: “But America is exceptional because we believe that every life, at every stage, is precious, and that everyone everywhere has a God-given right to go as far as their talents and hard work will take them.” This strong pro-life statement that life is precious “at every stage” has been ignored by the conservative media. Why?

Obama says they are victims of workplace violence

Ft. Hood hero says “Obama betrayed us” –Three years after the White House arranged a hero’s welcome at the State of the Union address for the Fort Hood police sergeant and her partner who stopped the deadly shooting there, Kimberly Munley says President Obama broke the promise he made to her that the victims would be well taken care of. Read more
Obama stunned at Prayer Breakfast – Dr. Benjamin Carson, holder of the Medal of Freedom, shocked President Barack Obama as he spoke against political correctness and the horrendous debt facing our nation at the National Prayer Breakfast. Obama sat emotionless just a few feet from Dr. Carlson as he tore apart the President’s agenda. Video of speech here.
Congress
McCain rationalizes arming Islamists – To make an omelet, eggs have to be broken. In Syria the Christians are the eggs and the omelet is the containment of Iran. In an interview with Chris Wallace, Senator John McCain explained his reasoning behind wanting to arm the jihadists in Syria this way: “There is a national security component; it would be the greatest blow to Iran, in the last 25 years, if Bashar al-Assad fell, not to mention Hezbollah.” In other words it is good to bring al-Qaeda to power in Syria if it means our “greatest enemy,” Iran, is damaged by that action. How did that work for us in Afghanistan when we armed the Islamists to oust our “greatest enemy” at the time, the Soviet Union?
Religion and Culture
MovieGuide Gala – This evening I will be participating in the MovieGuide Gala at the Universal City Hilton Hotel. For decades MovieGuide.org has given families reviews of movies that can be counted on, by evaluating language, sexual and violent content. The spiritual worldview of films is also examined. Founded by Ted Baehr, the MovieGuide.org organization has helped Hollywood reduce the number of R rated movies by half in the last two decades. I will be offering the closing prayer at the Gala which will be shown on the Hallmark Channel later this year.
Violence proves the weakness of Islam – Islamic scholar Dr. Mark Durie exposes the apostasy laws as proof of the weakness of the religion of Islam. Muslim leaders must literally kill people to stop them from converting to other religions. The growth of Islam since Mohammed has been through violence. Read more
Christian Bookstore and more – books, CD’s, DVD’s, cards and much more available at the Religious Freedom Coalition Internet Store. Please visit today!
International
UK: “Moderate” mosque hosts fund raiser for terrorist – Britain’s biggest mosque is under investigation after it scheduled a fundraising event for a convicted would-be killer. The event is in support of Aafia Siddiqui who is serving 86 years for the attempted murders of US soldiers and FBI agents in Afghanistan five years ago. Read more
Germany: Churches converted to mosques – The gradual proliferation of mosques housed in former churches reflects the rise of Islam as the fastest growing religion in post-Christian Germany. In the most recent case, the church would be the first converted into a mosque in the second-largest city in Germany. Read more
Thailand: 16 Muslims die attacking army base – In a huge escalation of Islamic violence in Thailand, sixty armed jihadists in fatigues attacked an army base in Narathiwat province at 1:00 AM. They were repelled, and sixteen were killed. The attack came just a few days after a Thai army truck was bombed, killing five soldiers. Read more
Join me in a fact finding mission to Israel – A once in a lifetime mission led by William J. Murray, William Federer and Frank Gaffney, all three experts on Israel and Islamic affairs. Not a standard “tour,” the mission includes visits to settlements and military bases plus evening panels. Limited time for $400 discount! Read more
More from the Religious Freedom Coalition
New Chairman’s Report – Now available, the February 8th, 2013 edition of the Religious Freedom Coalition Chairman’s Report. In the current issue: William J. Murray answers a CIA “specialist” who claims democracy will “moderate” Islam / Saudi cleric pays $50,000 fine for raping and murdering his six year old daughter / UK judge lets Muslim rapist walk because he was taught “women were worthless” by his religion / UK politician jailed for critical Facebook comment on Islam
My Life Without God – William J. Murray’s first book, My Life Without God, is now back in print as the 30th anniversary of his atheist mother’s lawsuit to remove prayer form the schools approaches. Murray writes of his life in the dysfunctional home of infamous atheist/Marxist leader Madalyn Murray O’Hair. Learn more
Christian Bookstore and more – books, CD’s, DVD’s, cards and much more available at the Religious Freedom Coalition Internet Store. Please visit today!