Opposing hostility towards faith in the Air Force
Congressman Randy Forbes joined Congressman Diane Black and Congressman Todd Akin in sending a letter signed by 66 Members of Congress urging Secretary of Defense Leon Panetta to investigate a pattern of hostility towards faith in the United States Air Force.  Over the last year, the Air Force has repeatedly capitulated to pressure from outside groups to remove religious symbols and references to faith from the service.  The letter calls on Secretary Panetta to issue clear Department of Defense policy guidance, consistent with our Constitution, to preserve the place of religious expression in the military at large.

Supporting legislative prayer at the U.S. Court of Appeals for the Eleventh Circuit
Thirteen Members of the House of Representatives have joined the Family Research Council (FRC) in submitting an amicus curiae brief to the U.S. Court of Appeals for the Eleventh Circuit in support of legislative prayer.  The Lakeland City Commission in Florida had a policy of inviting clergy to offer invocations at the beginning of its meetings.  The Atheists of Florida sued, arguing that because most of the prayers were offered by Christian clergy, the prayers were “too sectarian” and thus violated the Establishment Clause.  The brief submitted by the Members argues that courts do not have the jurisdiction to delve into the inner workings of a deliberative body’s meetings because of the constitutional separation of powers between the branches of government.

Supporting the freedom of school boards to open meeting with prayer
Members of the Prayer Caucus are supporting a resolution introduced by Congressman Tim Walberg that supports the freedom of school boards to open meetings with prayer.  H.Res.662 expresses the sense of the House of Representatives that school boards are deliberative bodies similar to city and county councils and state legislatures, and should be treated as such for purposes of analyzing the constitutionality of their prayer policies.

Working to protect the symbols and traditions of Christmas
Members of the Prayer Caucus are supporting H.Res.489, introduced by Congressman Doug Lamborn, which expresses the sense of the House of Representatives that the symbols and traditions of Christmas should be protected for use by those that celebrate Christmas.  Each year during the Christmas season, there are increasing efforts to remove religious symbols and references from the holiday.  H.Res.489 emphasizes that the First Amendment does not require bans on religious references to Christmas, and supports the use of these symbols by those who celebrate Christmas.

Fighting attempts to remove “Under God” from the Pledge of Allegiance
Members of the Congressional Prayer Caucus lead in sending a letter to NBC, expressing concern over the network’s omissions of “under God” from the Pledge of Allegiance twice in a video montage aired during coverage of the U.S. Open.  In response to the letter sent by 108 Members of Congress, the network reprimanded the employees responsible for the omissions and implemented safeguards to prevent similar instances in the future.

Opposing efforts to remove a memorial cross honoring military veterans
In January of 2011, a three-judge panel of the U.S. Court of Appeals for the Ninth Circuit ruled that a cross displayed at the Mount Soledad Veterans Memorial in San Diego, California was unconstitutional.  Members of the Prayer Caucus signed on to an amicus curiae brief submitted to the Ninth Circuit asking the full court to reconsider the case, and asserting that the cross’s presence at the memorial is constitutional.  After the Ninth Circuit declined to reconsider the case, Members joined the American Center for Law and Justice (ACLJ) in submitting an amicus curiae brief to the Supreme Court of the United States, asking the Court to take up the case and reverse the Ninth Circuit’s decision.  In June of 2012, the Supreme Court announced that it would not review the case; however, Justice Alito issued a statement saying the appeal may have been premature and the Court may reconsider the case after the district court issues a final order on the fate of the memorial.

Urging religious freedom protections for service members
The repeal of the “Don’t Ask, Don’t Tell” policy in the military raised concerns that service members whose consciences or religious beliefs conflicted with homosexual behavior would face discrimination and disapproval.  Members of the Prayer Caucus sent a letter to President Obama, urging that specific religious freedom and conscience protections be adopted during implementation of the repeal to formally assure all Americans that our citizens need not leave their faith at home when they volunteer to serve. 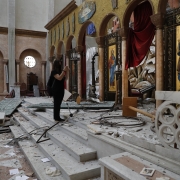 The Christians in Lebanon

Join The Fight To Free Meriam Ibrahim From A Sudan Prison